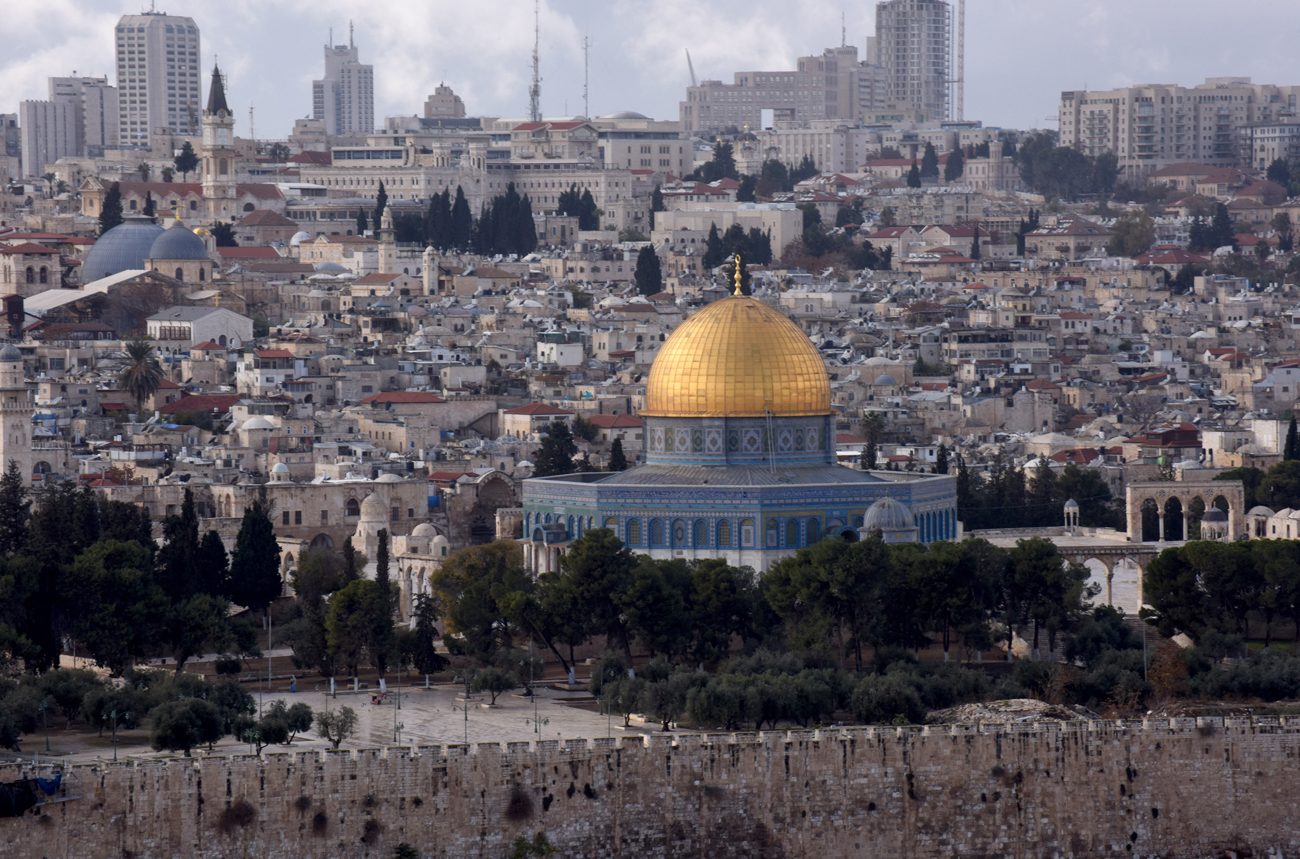 The gold-covered Dome of the Rock at the Temple Mount complex is seen in this overview of Jerusalem's Old City Dec. 6. In an open letter to U.S. President Donald Trump, Christian leaders in Jerusalem said U.S. recognition of the city as the capital of Israel could have dire regional consequences. (CNS photo/Debbie Hill)

UPDATED – JERUSALEM (CNS) — In an open letter to U.S. President Donald Trump, Christian leaders in Jerusalem said U.S. recognition of the city as the capital of Israel could have dire regional consequences.

“We have been following, with concern, the reports about the possibility of changing how the United States understands and deals with the status of Jerusalem. We are certain that such steps will yield increased hatred, conflict, violence and suffering in Jerusalem and the Holy Land, moving us farther from the goal of unity and deeper toward destructive division,” the Christian leaders said, just hours before Trump announced the U.S. was recognizing Jerusalem as the capital and relocating the U.S. embassy.

They appealed to Trump to take their viewpoint into consideration, as did the leaders who met at Camp David in July 2000 to decide the status of Jerusalem. The Christian leaders said their “solemn advice and plea” for the president was to continue recognizing the international status of Jerusalem.

“We ask you, Mr. President, to help us all walk toward more love and a definitive peace, which cannot be reached without Jerusalem being for all,” they said Dec. 6.

“Any sudden changes would cause irreparable harm. We are confident that, with strong support from our friends, Israelis and Palestinians can work toward negotiating a sustainable and just peace, benefiting all who long for the Holy City of Jerusalem to fulfill its destiny.”

The Christian leaders, who include Catholic and Orthodox patriarchs as well as the Franciscan custos of the Holy Land, said Jerusalem could be “shared and fully enjoyed” once a political process helped “liberate the hearts of all people that live within it from the conditions of conflict and destructiveness that they are experiencing.”

With Christmas approaching they asked that Jerusalem “not be deprived” of peace; they wished Trump a Merry Christmas and asked that he help them “listen to the song of the angels.”

“As the Christian leaders of Jerusalem, we invite you to walk with us in hope as we build a just, inclusive peace for all the peoples of this unique and Holy City,” they said. 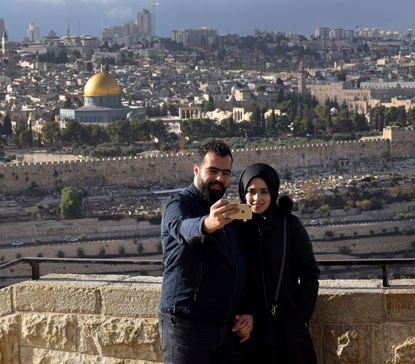 A couple takes a selfie from Mt. of Olives overlooking Jerusalem’s Old City Dec. 6. In an open letter to U.S. President Donald Trump, Christian leaders in Jerusalem said U.S. recognition of the city as the capital of Israel could have dire regional consequences. (CNS photo/Debbie Hill)

In 1967, Israel annexed East Jerusalem, which had been under Jordanian control since 1948. In 1980 Israel declared a united Jerusalem as its capital. Palestinians see East Jerusalem as the future capital of an independent Palestine.

The internationally unsettled status of Jerusalem and its central importance to Jews, Muslims and Christians explains why, while recognizing the state of Israel, no nation has its embassy in the holy city. Since the early 1990s, the Vatican has called for a special status for the city. It has insisted the political question of the city’s status must be the result of negotiation.

Although the U.S. Conference of Catholic Bishops did not comment on Trump’s announcement, earlier this year, Bishop Oscar Cantu of Las Cruces, New Mexico, chairman of the bishops’ Committee on International Justice and Peace, urged U.S. Secretary of State Rex Tillerson to keep the U.S. Embassy in Tel Aviv.

“Relocating the embassy to Jerusalem is tantamount to recognizing Jerusalem as the undivided capital of Israel,” which would destabilize the region, Bishop Cantu said in the letter dated Feb. 1.

The bishops’ former adviser on Mideast issues, Jesuit Father Drew Christiansen, said declaring Jerusalem the capital of Israel “is a serious step, signaling diplomatic approval for Israel’s seizure of the city by force and eroding what had been united international opposition to the idea that the Holy City could be claimed through Israel’s military victory.”

“In quiet acts of ethnic cleansing, Palestinian Jerusalemites are denied residency because of extended absences or because they have married residents of the West Bank,” he wrote in America magazine. “Their neighborhoods are rezoned for public uses; their homes are occupied by Jewish settlers and they have no legal recourse. Moving the U.S. embassy to Jerusalem means giving the seal of approval to ‘facts on the ground’ that despoil Palestinian Jerusalemites of their birthright.”

In Jerusalem, Wadie Abunassar, chairman of media relations for the Christian leaders, said the status of Jerusalem is not only an issue for Israelis and Palestinians, but also for other Muslim countries as well. He noted that already a gathering of Arab foreign ministers has been organized for Dec. 11 as well as a meeting prepared by Turkey for Muslim countries.

“Jerusalem is a sensitive issue for all, so the Christian leaders, (following) the pope, are making an appeal to President Trump to be wise — there is a need for wisdom … especially in such an explosive situation,” he said.

With violent demonstrations already in evidence even before any announcement had been made, Abunassar said more steps that produce confidence-building measures are needed rather than steps that “add oil to the flame.”

Hamas, the Palestinian Islamic political party with an armed faction, called for more protests in the coming days, particularly Dec. 8, the Muslim day of prayer. The U.S. labels Hamas a terrorist organization.

In Lebanon, Abdul Latif Derian, grand mufti of Lebanon’s Sunni Muslims, called on Arab Islamic leaders to counter the U.S. embassy’s relocation to preserve the Arab identity of Jerusalem. The mufti is an important figure for Sunni Muslims, not just locally but regionally. Most of the Palestinian population in the region is Sunni Muslim.

“The transfer of the U.S. Embassy to Jerusalem and the recognition of the Holy City as the capital of Israel is a blatant challenge and provocation to the feelings of Palestinians, Arabs and Muslims,” the mufti said in a statement Dec. 6. “This step would turn the region into a flame of conflicts that will inevitably lead to disastrous consequences and would adversely affect the region and the international community. This will have serious repercussions on the Arab and Islamic region.”

“The recognition of Jerusalem as the capital of Israel is unacceptable and represents a step toward the elimination of the Palestinian cause, which will not be allowed by Arabs and Muslims,” the mufti said, calling to confront the Israeli enemy in various ways.

“Confrontation is a legitimate right aiming to defend the occupied land of Palestine,” he said.

Many Israelis celebrated the move; U.S. Jewish groups were split in their reaction.