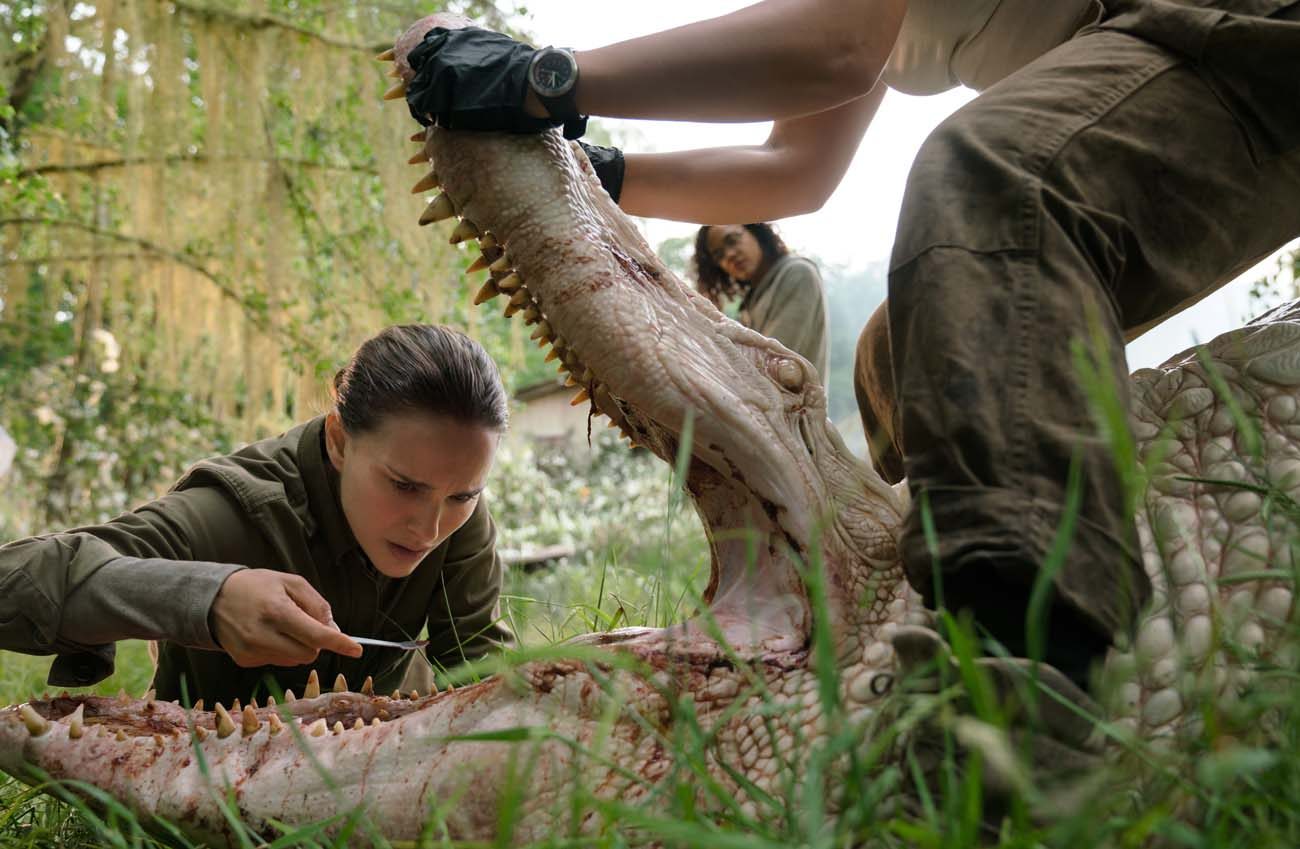 Natalie Portman stars in a scene from the movie "Annihilation." (CNS photo/Paramount)

But the payoff fizzles. Along the way, a couple of blood-soaked scenes, though brief, put this off limits for most.

Adapted from the first in a trilogy of novels by Jeff VanderMeer, “Annihilation” centers on soldier-turned-biologist Lena (Natalie Portman). After her husband, Kane (Oscar Isaac), returns from a secret Army mission and falls mysteriously and critical ill, both spouses are taken into military custody and confined in a Guantanamo Bay-like facility.

As resident psychologist Dr. Ventress (Jennifer Jason Leigh) eventually informs Lena, the base stands just beyond the edge of an unexplained and ever-growing atmospheric phenomenon called the Shimmer. Kane and his team had been dispatched to explore the territory covered by the Shimmer; Kane alone returned.

In fact, Kane is the only person ever to have reemerged from the Shimmer in the three years since its first appearance. Everyone else attempting to analyze it from within has, like Kane’s comrades, disappeared.

Learning that Ventress plans yet another expedition inside, Lena volunteers to join it, hoping she can identify a cure for what ails Kane. What she and the other researchers on the trek — paramedic Anya (Gina Rodriguez), physicist Josie (Tessa Thompson) and anthropologist Cass (Tuva Novotny) — discover on their journey involves a series of bizarre animal and plant mutations by turns beautiful and terrifying.

“Annihilation” is often visually striking and sometimes morbidly fascinating. But the movie’s initially strong grip on the audience gradually loosens, and the conclusion toward which it builds ultimately feels like a letdown.

A subplot dealing with an adulterous affair, though portrayed with less discretion than it might be, does present the situation in a negative light, making it a source of guilt for the more prominent of the two characters engaged in it.

The script also touches, in passing, on God and the potentially supernatural nature of the Shimmer. While Lena entertains the idea that the Deity can make mistakes, Kane dismisses this error out of hand. The exchange is so abbreviated and unserious, however, that it’s hard to tell on whose side Garland ranges himself — if he does so at all.

The film contains fleeting but extreme gore, semigraphic adulterous sexual activity, scenes of marital intimacy, partial upper nudity, references to lesbianism, at least one use of profanity and a milder oath and several rough and crude terms. The Catholic News Service classification is L — limited adult audience, films whose problematic content many adults would find troubling. The Motion Picture Association of America rating is R — restricted. Under 17 requires accompanying parent or adult guardian.

NEXT: By the final reel: films for Lent with conversion themes