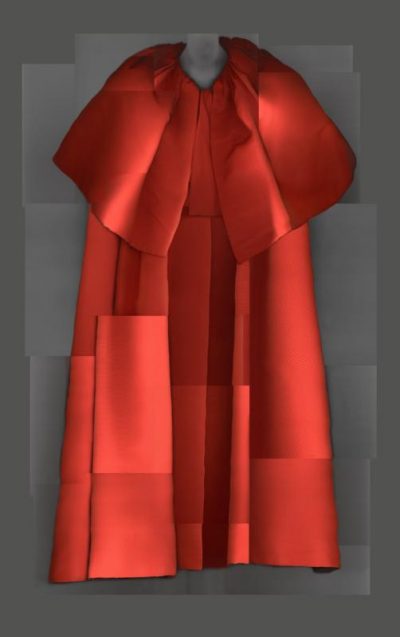 WASHINGTON (CNS) — The sectarian will meet the secular in an unusual way with the May 10 debut of the Metropolitan Museum of Art’s exhibit “Heavenly Bodies: Fashion and the Catholic Imagination” in New York City.

Included will be not only high fashion meant for the taste-making laity, but vestments and accoutrements from 15 different papacies from the 18th to the early 21st centuries.

“The loan from the Office of the Liturgical Celebrations of the Supreme Pontiff was negotiated over a period of approximately two years. It required eight trips to the Vatican,” said Andrew Bolton, head curator of the Metropolitan Museum of Art’s Costume Institute.

The British-born Bolton said the exhibit will include vestments made for clergy by designers. “One example was designed by Jean-Charles de Castelbajac for St. John-Paul II to wear on World Youth Day in August 1997,” he said. “It is a chasuble embroidered with rainbow-hued Byzantine crosses by Maison Lesage, one of the oldest and most eminent embroidery houses serving the haute couture.”

The influence of the church on some of yesterday’s — and today’s — top designers is considerable.

“Coco Chanel, who was educated in the orphanage at the monastery of Aubazine (France), often imbued subtle references to Catholicism in her work,” Bolton said. “In particular, she became known for her religious-inspired costume jewelry that she was regularly photographed wearing. This included a ‘sautoir’ (a ribbon or chain around the neck) that bears a formal relationship to the rosary with its five decades of prayer beads.”

“Their relationships to Catholicism vary considerably,” Bolton said, but “most acknowledge its significant influence over their imaginations.”

“Raised Catholic, he was a man of profound religious conviction and spirituality, qualities reflected not only in his ascetical fashions but also in his design practice,” Bolton said. “During his lifetime, his approach to creation was likened by many as a ‘religious vocation,’ while his atelier (studio) was often compared to a monastery. As a child, Balenciaga was an altar boy, and growing up he considered following his uncle (Julian) — the parish priest of the local Church of San Salvador in Guetaria (Spain) — into the clergy.”

Bolton has a ready response to those who would derisively dismiss anything connected with the church by using the well-worn trope, “The pope wears a dress.”

“It is our hope that the exhibition will promote an understanding of the symbiotic and sometimes mutually inspiring relationship between fashion and religion. Fashion’s engagement with Catholicism belongs to a lineage rooted in artistic tradition and continues the ever-evolving relationship between art and religion,” he said. “It is a rare and exciting opportunity that we hope will engage a diverse and vast audience — Catholic and non-Catholic.”

The Met, as the museum is commonly known in and around the Big Apple, is launching “Heavenly Bodies” at two locations: four galleries inside its Fifth Avenue site and the aptly named Met Cloisters at Fort Tryon Park. The exhibit will run through Oct. 8.

Those wanting to view the collection may get more than one religious experience. The Met recently instituted a $25 love offering — er, admission charge — to gallery visitors not living in the New York region.

NEXT: Visually striking ‘Annihilation’ fizzles to its end