A comic book look at ‘The People’s Pope’ 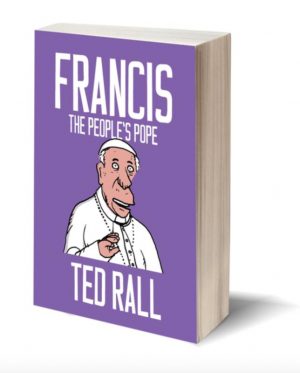 This is an image from “Francis: The People’s Pope,” a graphic biography by journalist and cartoonist Ted Rall. Written from a far-left political perspective, the book calls Pope Francis a refreshing new leader, but argues he isn’t liberal enough. (CNS photo/Seven Stories Press)

NEW YORK (CNS) — “Francis: The People’s Pope” (Seven Stories Press), a graphic biography by journalist and cartoonist Ted Rall, is, in its way, a celebration of the current successor of St. Peter.

Written from a far-left political perspective, the book calls Pope Francis a refreshing new leader but argues that he isn’t liberal enough.

While entertainingly drawn and sharply written, ultimately the book is too tendentious in its political bias.

Rall, an atheist and Pulitzer Prize finalist, advocates for same-sex marriage, contraception, married priests, female priests and abortion. Acknowledging the unlikelihood of the Catholic Church ever changing its stance on these core issues — the pontiff himself has no power to revise dogma, though the celibacy of the clergy is a matter of practice, not technically doctrine — Rall instead celebrates Francis as the harbinger of a “new tone” in the church.

Throughout “The People’s Pope,” Rall lays out some truths, but often in an incomplete or misleading manner. He zeros in, for instance, on Pope Francis’ famous 2013 comments about judgment and homosexuality. Speaking to reporters on the return flight from a trip to Brazil, the pope said, “If a person is gay and seeks out the Lord and has goodwill, who am I to judge?”

Rall omits the pope’s subsequent clarification: “I was paraphrasing by heart the Catechism of the Catholic Church where it says that these people should be treated with delicacy and not be marginalized.

“I am glad that we are talking about ‘homosexual people’ because before all else comes the individual person, in his wholeness and dignity. And people should not be defined only by their sexual tendencies: Let us not forget that God loves all his creatures and we are destined to receive his infinite love.”

The pontiff added: “I prefer that homosexuals come to confession, that they stay close to the Lord and that we pray all together. You can advise them to pray, show goodwill, show them the way and accompany them along it.”

A colorfully illustrated volume, “The People’s Pope” is separated into brief sections covering a wide variety of topics. In the passage on church history, Rall lashes the church for jailing Galileo and unfairly tars it with not doing enough to resist the Nazis.

Rall also deals with the Second Vatican Council, the life of Jorge Mario Bergoglio in Argentina before he became pope, the sexual abuse scandal that hit the church beginning in 2002, South American liberation theology, the Catholic response to the war on terror and the pontificates of St. John Paul II and Pope Benedict XVI.

The frank treatment of war and sexuality, including pedophilia — as well as the off-kilter way in which the church is repeatedly portrayed — make this unsuitable for younger readers. Nor can it be endorsed for grownups lacking in knowledge of the faith.

Rall offers a straightforward account of Francis’ youthful life, then turns to the “dirty war” that tore Argentina apart in the 1970s and 1980s. A middle-age Jesuit at the time, then-Father Bergoglio has been accused of both aiding the right-wing “Iron Guard” in power and the leftist guerrillas in opposition. “His legacy is murky” here, concludes Rall.

In another section Rall criticizes St. John Paul as “the anti-Francis.” John Paul, he argues, was an “establishmentarian” standing in opposition to Francis, the champion of the poor.

Yet it’s difficult to argue that the Polish pope, who grew up in a war-torn country destroyed by both fascists and communists, didn’t have sympathy for — or contact with — the poor. Faced with this, even Rall admits that John Paul “was deeply concerned about the oppressed.”

Furthermore, while Rall touts Pope Francis’ “refreshingly modern views on sex,” he doesn’t note that, far from being ashamed of human sexuality, Karol Wojtyla initiated the theology of the body — and the dynamic of human love was central to his whole theological vision.

Like Rall, both Popes Francis and John Paul opposed the Iraq War.

Rall has a primitive drawing style, but he gives his characters personality and humor. He writes in a simple, declarative style that presents arguments with selective research but does avoid hectoring.

To marshal his case, Rall quotes church historians and theologians who agree with him. In the softball section on liberation theology, the Marxist-tinged strain of Catholicism that excited the Christian left in the 1970s and 1980s, Rall quotes Fidel Castro to the effect that “he who betrays the poor betrays Christ.”

After more than 200 pages of graphics, cartoons and reproduced newspaper headlines, Rall comes to his conclusion: “No doubt about it: Francis is a breath of fresh air to an institution that badly needs it. But he isn’t a wild-eyed liberator.”

Of course, from the subjective view of a political activist, the same could be said about any number of church leaders from St. John XXIII, who convened Vatican II, to St. John Paul, who helped destroy the prison of European Communism.

The graphic biography contains a distorted view of Catholicism as well as mature themes and images. The Catholic News Service classification is L — limited adult audience, material whose problematic content many adults would find troubling. Not otherwise rated.