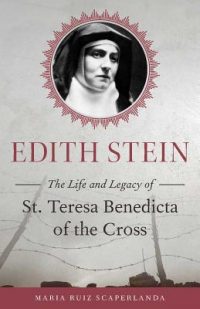 Edith Stein, who eventually became Carmelite Sister Teresa Benedicta of the Cross, is not well known as saints go but is becoming better known, thanks to books like this one. Author Maria Ruiz Scaperlanda has given her readers a clear and readable introduction to this fascinating figure of 20th-century Catholicism, while intriguing us with some parallel historical figures.

The saint was born into a Jewish family on the feast of Yom Kippur, the Day of Atonement, in what was then Breslau, now the Polish city of Wroclaw. As the youngest in a family of seven she was spoiled early but then showed herself to have a vivid inner life and was quite bright, going to school early and always doing well. Her family was nominally Jewish, and her mother was widowed when Edith was tiny but was able to do quite well with the family lumber business.

By age 15, Edith had declared herself an atheist, but she came to see the possibility of Christian faith while in university studies. Although conditions for Jews in Germany weren’t as bad as they had been in past eras, she still encountered plenty of prejudice as a Jewish woman in higher education in the early years of the 20th century.

As she studied phenomenology, then a new form of philosophy, she proved herself to be brilliant. She worked closely with one of the masters of this field, Edmund Husserl, and, along with her fellow students, encountered Christian faith and thought.

A turning point for her would come when she read the autobiography of St. Teresa of Avila, also a Carmelite. When she finished it she is said to have remarked, “This is the truth!” She never said much about the process of her conversion to Catholicism, which was difficult for her whole family. It was especially hard for her mother, who was never really OK with her daughter’s decision. As a result, Stein waited 11 years before entering the Carmelite order, although she felt called to that life much earlier.

During her years of formation, conditions were increasingly harder for Jews in Germany, and within six months of her profession of vows, she needed to transfer to the community’s house in Holland, for her sake but also to protect the sisters still left in Germany. She and her sister Rosa, who by then was a lay sister connected to the Carmelite convent, were unable to get to a convent in Switzerland or elsewhere for their safety.

She was encouraged to continue to write and study, and the “science of the cross” which she was describing and reflecting on was what exactly what she and her family were facing in the Nazi regime. At various points in the book Scaperlanda points out what was happening in the life of Adolf Hitler, only two years older than she. The author also draws parallels with Esther “Etty” Hillesum, Anne Frank and even St. John Paul II, because the latter also studied phenomenology and had to contend with the Nazi influence in his life.

Like Frank, Hillesum was a diarist. Before she was executed at Auschwitz, she had written much about her own religious awakening and the persecution of the Jewish people.

As she faced death, St. Edith Stein’s strength of mind and soul as a feminist and contemplative become clearer. Because the Dutch bishops had dared to condemn the deportation of the Jews, all Catholic Jews in Holland were quickly arrested. As they were taken away to the death camps and martyrdom Stein said to her sister, “Come, let us go for our people.”

Scaperlanda acknowledges and discusses that, although Catholics see St. Edith Stein as a bridge between Christians and Jews, for many Jews she is seen as an apostate, someone who has abandoned her people and her tradition. Overall, this is a clear introduction to a fascinating woman saint of the 20th century, who once said, “To believe in saints means only to sense in them God’s presence.”

In this book, we encounter a saint who is impressive indeed.

Finley is the author of several books on practical spirituality and formerly taught in the religious studies department at Gonzaga University in Spokane, Washington, for many years.

NEXT: Despite flaws, book offers fair assessment of Francis’ papacy so far