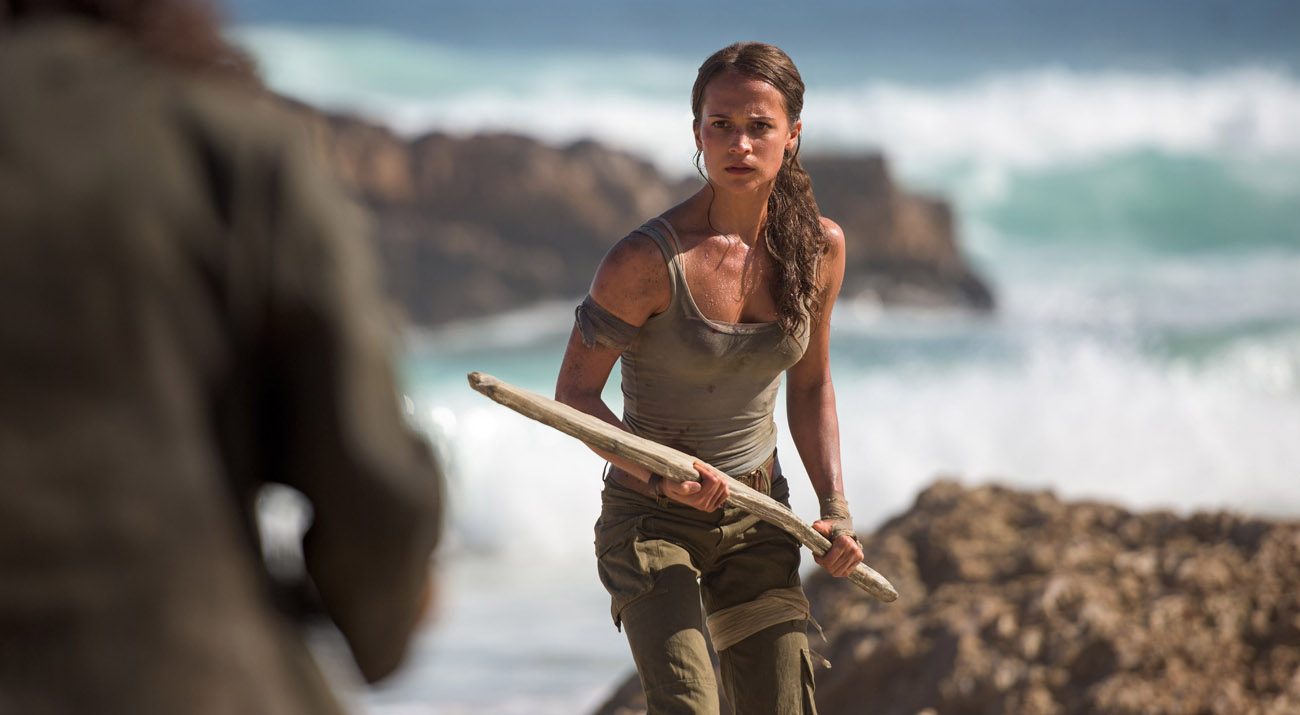 NEW YORK (CNS) — Way back when, while the century was yet young, Angelina Jolie brought a familiar figure from the world of video games to life in 2001’s critically panned but financially successful “Lara Croft: Tomb Raider” and 2003’s better reviewed but less lucrative “Lara Croft Tomb Raider: The Cradle of Life.”

Whether Lara, who is presented in Geneva Robertson-Dworet and Alastair Siddons’ script as equally capable of holding her own in a kick-boxing match and quoting Shakespeare off-the-cuff, represents female empowerment or sophomoric male wish fulfillment may be debatable. But the high volume of nasty mayhem along her current path is not.

Equally obvious are the mythological flourishes that will be vaguely distasteful to grown viewers and that contribute to making director Roar Uthaug’s origin story inappropriate for youthful moviegoers.

Seven years after the disappearance of her business tycoon-turned-archaeologist father, Richard (Dominic West), Lara continues to prefer life as a London bicycle courier to settling down and enjoying her riches. In part, that’s because cashing in on her status as an heiress would require officially admitting that Richard is dead.

Ironically, once her guardian, Ana Miller (Kristin Scott Thomas), finally convinces Lara to sign the sad paperwork, a puzzle Dad provided should be given to her in the case of his death becomes the first clue launching Lara on a hunt to track him down.

Stricken by the death of his beloved wife, Richard, we learn, had embarked on an investigation of the supernatural, hoping to find proof of an afterlife. Instead of a short journey to his local parish, this involved Richard in an extended trip to a metaphysical never-never land.

As a result, we get a lot of hooey about Queen Himiko, an evil goddess who lies buried on an almost uncharted island off the coast of Japan — and who must remain entombed there for the welfare of the world. Realizing that a shadowy organization called Trinity was out to locate and exploit the deity, Richard set off for the isle of her repose.

As Lara follows suit, she gets help on her quest — and, later, in her fight against one of Trinity’s minions, Mathias Vogel (Walton Goggins) — from hard-drinking Hong Kong sea captain Lu Ren (Daniel Wu). These two remain strictly allies, however, with no romance even implied. So there’s no danger of any wayward sexual behavior between them or, for that matter, on the part of any of the other characters.

Dustups abound, though, and a couple of minor characters suffer especially unpleasant deaths from weapons or disease. Since the proceedings become tiresomely repetitive, with features that might make gameplay enjoyable failing to work on screen, believers in the audience have plenty of time to wonder why the bad guys have taken the name of the Christian God for their moniker.

The film contains occult themes, much harsh violence with some gore, a few gruesome images, at least one use of profanity and a couple of milder oaths, a stifled rough term and about a half-dozen crude words. The Catholic News Service classification is A-III — adults. The Motion Picture Association of America rating is PG-13 — parents strongly cautioned. Some material may be inappropriate for children under 13.

PREVIOUS: Once a hit song, ‘I Can Only Imagine’ comes to the screen