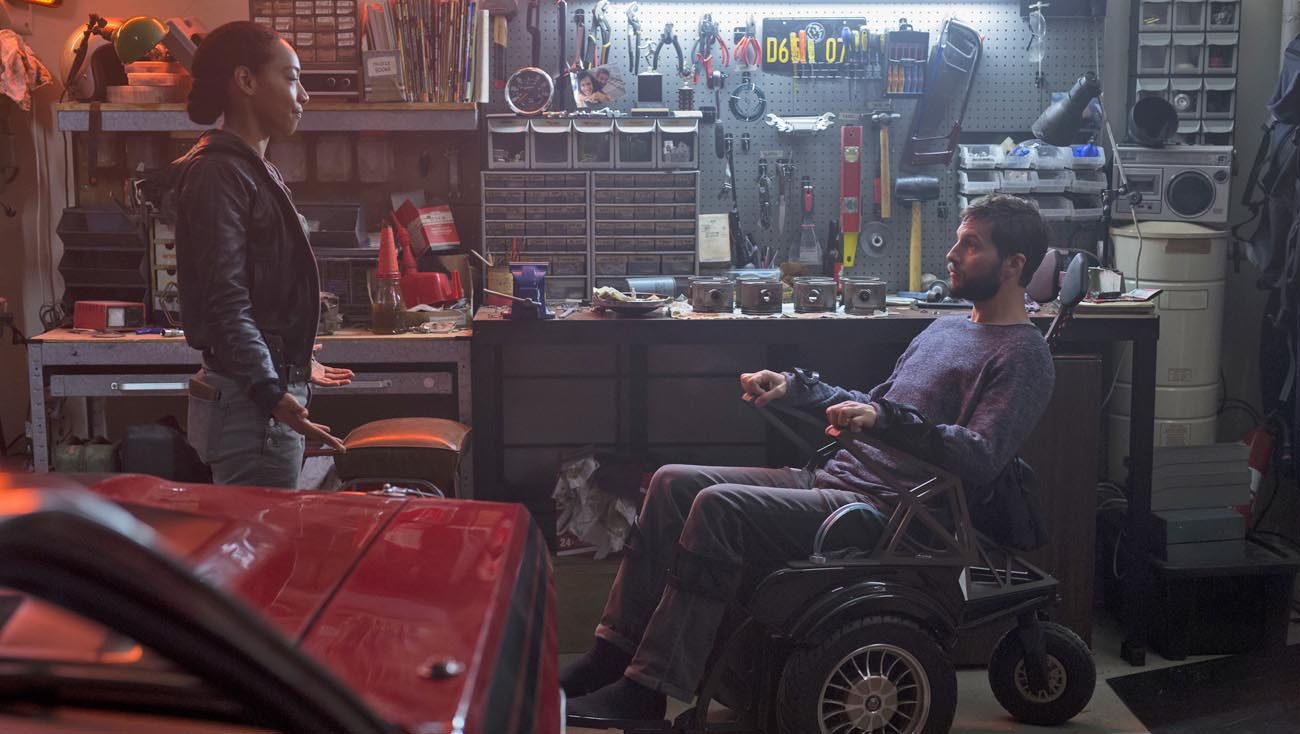 Betty Gabriel and Logan Marshall-Green star in a scene from the movie "Upgrade." (CNS photo/Universal Pictures)

That’s a shame because, although its message about the dangers of technology run amok is at least as old as Mary Shelley’s “Frankenstein,” the familiar warning comes wrapped in a fresh-feeling package.

Set in a recognizable version of the future, this is the story of Grey Trace (Logan Marshall-Green), an auto mechanic who prefers classic sports cars to the elaborate gadgets that regulate life inside the home he shares with his computer savvy — and much-loved — wife, Asha (Melanie Vallejo).

Grey’s contented existence is suddenly thrown into turmoil when he and Asha are set upon by thugs, led by a sadistic villain named Fisk (Benedict Hardie), in a seemingly random attack that leaves her dead and him a quadriplegic. Suicidally depressed in the wake of this assault, Grey gains some hope from an unexpected quarter.

One of his clients, wealthy inventor Eron Keen (Harrison Gilbertson) offers to implant an artificial intelligence chip into Grey’s body that will cure his paralysis. This cutting-edge device, called Stem — which turns out to have a Siri-like voice (Simon Maiden) only Grey can hear — does more than restore his normal abilities. It endows him with superhuman fighting prowess.

Grey uses his newfound invincibility to embark on a trail of investigation and revenge along which he must stay one step ahead of police Det. Jane Cortez (Betty Gabriel), the officer assigned to his and Asha’s case. The vengeance Grey wreaks is neither pretty nor discreetly portrayed.

In presenting his cautionary tale, however, writer-director Leigh Whannell is careful to place Grey, at least initially, in situations where his reprisals can be partially justified as self-defense. As the mayhem continues, moreover, Grey and Stem are increasingly at odds in a struggle for control similar to the one famously depicted in Stanley Kubrick’s “2001: A Space Odyssey.”

Ultimately, only Grey’s reluctance to obey the ever-more savage will of his inhuman opponent will redeem “Upgrade” for at least some grown viewers. Others will justifiably deem it offensive.

The film contains much gory, occasionally gruesome, violence, mature themes, including vengeance and suicide, a scene of marital sensuality, a handful of profanities and numerous rough and crude terms. The Catholic News Service classification is L — limited adult audience, films whose problematic content many adults would find troubling. The Motion Picture Association of America rating is R — restricted. Under 17 requires accompanying parent or adult guardian.

PREVIOUS: Social scientist addresses question of why people are religious

NEXT: Survival against the odds becomes job 1 in ‘Adrift’