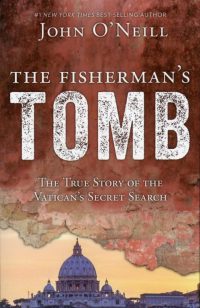 This book tells one of the most remarkable, and astonishing, true stories ever to come out of the Vatican. There are other books on the topic of the search for the relics of St. Peter, but this may well be the most complete and accurate one so far.

John O’Neill’s detailed account begins with the martyrdoms of Sts. Peter and Paul in the mid-first century and concludes with the 2013 declaration by Pope Francis that the bones identified by archaeologist Margherita Guarducci as those of St. Peter are, indeed, precisely that.

One of the key events in numerous attempts to decipher ancient inscriptions was Guarducci’s ultimate success at doing so. O’Neill explains that “Guarducci had a strange genius of her own. She was consumed by inscription puzzles, and she had a special sight — a combination of deduction and genius — that would allow her in time to decipher the clues leading to Peter.”

Three inscriptions scratched and disguised on ancient walls that she finally deciphered were absolutely key to the identification of Peter’s remains: “Near Peter,” “Peter is within” and “Peter pray for me.” “This could not be a coincidence,” O’Neill remarks. “Clearly early Christians had prayed to Peter here, in the presence of his actual relics.” Indeed, in this same location Guarducci found Peter’s name inscribed more than 20 times. She wrote a book about her findings in 1960.

Oddly enough, one of the main strands of O’Neill’s narrative is his discussion of a heated disagreement, one that lasted many years, between Guarducci and a Vatican priest-archaeologist, Father Antonio Ferrua. The latter discovered some bones that he declared were those of Peter, and even though they were later discredited he continued to insist that Guarducci’s work was invalid.

O’Neill’s book also tells the story of several popes who were involved over more than 75 years with the quest for Peter’s bones. Beginning with Pope Pius XII in 1939 until the papacy of Pope Francis, popes were either indifferent to this project or personally and heavily invested in it.

A major subtext to all this is, during World War II, the actions of Vatican officials to save the lives of hundreds upon hundreds of Italian Jews — a true story that deserves a book of its own, especially given the accusations of some that Pope Pius did little to help such projects.

Gripping as any novel, this book, ultimately about the search for truth above all, holds not only historical value but theological value, as well. For example, those who accuse Catholics of virtual idolatry for praying to saints for their intercession must face the archaeological evidence that Christians were praying to saints, like St. Peter, from the church’s earliest days.

The appearance of this book is a highly significant event in American Catholic publishing, and it deserves to be read widely.

Finley is the author of more than 30 books of popular Catholic theology, including “The Rosary Handbook: A Guide for Newcomers, Old-Timers, and Those In Between” (Word Among Us Press) and “A Man’s Guide to Being Catholic” (Wipf & Stock).