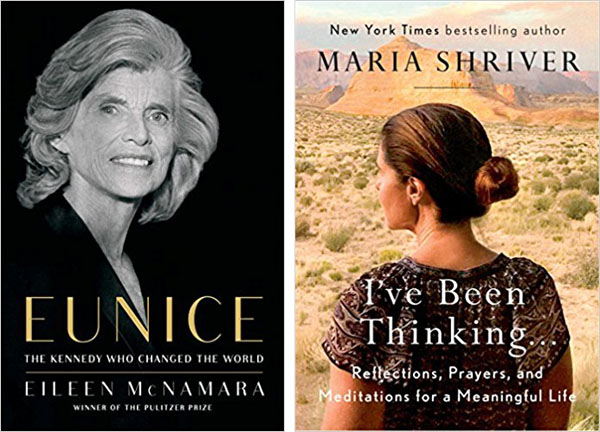 These two excellent books are best read together, starting with McNamara’s insightful page-turner history of the struggles and accomplishments of Eunice Kennedy Shriver, which also includes the achievements of her husband, Sarge Shriver.

Full disclosure: I was a friend of Sarge, and had dinner a number of times at the Shrivers’ home, meeting other Kennedys and Shrivers in the process. These family meals interlaced humor and serious discussion of the health and social issues facing our country and how they could, individually and together with others, help those in need. In short, they did not just pay lip service to the social teachings of the Catholic faith, they worked to make the vision of a better world a reality for all.

The biography of Eunice begins with her birth in 1921, the “middle child” of eight. It tells of the Kennedy family’s wealth and her youth, part of it spent in London when her father was U.S. ambassador to Great Britain. It shows the development of the Kennedys’ sense of responsibility to use their wealth and political power for others, including carving out a place for women in what was, when Eunice was born, “a man’s world.”

A number of photographs bring the vitality of the Kennedy clan into focus for the reader. McNamara uses Eunice’s personal notes and diaries to bring the story to life. Underlying Eunice’s efforts to help those with mental disabilities was the tragic life of her sister Rosemary.

The Special Olympics originated in the fact that the Kennedys and later the Shrivers would often invite those with special needs to their home to swim and to play, at a time when many such children were kept hidden away in overcrowded facilities.

From the family’s travels around the world came the realization that people all over were consigned to poverty and without decent health care. So the Peace Corps was born, a version of which was instituted within the United States as well.

Maria Shriver’s personal reflections are best understood within this larger family context, to which she often returns. Each chapter begins with a quotation from people ranging from Mahatma Gandhi, to saints, to people of conscience who lived and are living their faith such as Benedictine Sister Joan Chittister.

Shriver reflects on topics such as motherhood, laughter, forgiveness and, at the end, hope and the need to re-evaluate our lives, both internally and in terms of what we are doing to help those in need, always encouraging the readers can make a difference. She emphasizes the need to listen to others and to be open to the help we can give one another.

Each chapter ends with a prayer written by Maria that we can make our own.

Both books can be summarized by the quote from Dorothy Day (whom I also knew and worked with, and who should, now, be canonized) at the beginning of the book on Eunice: “Don’t call me a saint. I don’t want to be dismissed so easily.”