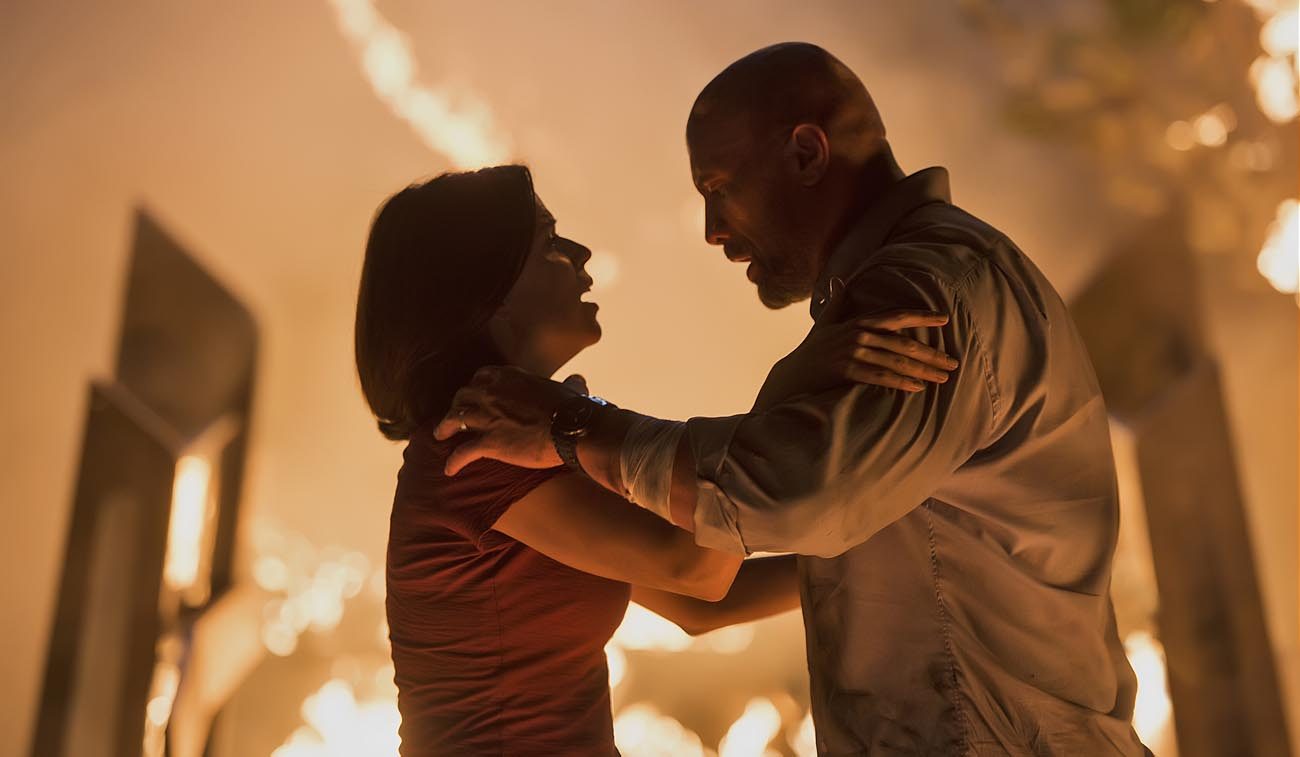 Dwayne Johnson and Neve Campbell star in a scene from the movie "Skyscraper." (CNS photo/Universal)

NEW YORK (CNS) — Way back in 1958, James Stewart’s character struggled with vertigo in the Alfred Hitchcock movie of the same name. But he had it easy compared to Dwayne Johnson’s ex-U.S. military security expert Will Sawyer in “Skyscraper” (Universal).

Hitchcock took Stewart no higher than a church belfry, after all. Writer-director Rawson Marshall Thurber puts Johnson through his hair-raising paces hundreds of stories above terra firma. Anyone with a fear of heights should accordingly take note: This easily forgotten action picture is not for you. Neither is it a movie for kids since the battles in which Will engages, though not especially bloody, are brutal.

Will unwittingly gets himself in trouble when he lands the high-profile and lucrative job of reviewing the safeguards at the world’s tallest building, the Pearl in Hong Kong. Though the offices that take up the lower section of the Pearl have opened, occupancy of its higher residential portion has been stalled by the concerns of insurers, represented by supercilious British broker, Mr. Pierce (Noah Taylor).

If Will gives the go-ahead, the apartments can open. In the meantime, the tycoon who created and owns the Pearl, Zhao Long Ji (Chin Han), has arranged for Will and his family — made up of wife Sarah (Neve Campbell) and kids Georgia (McKenna Roberts) and Henry (Noah Cottrell) — to stay in one of the empty flats during their visit.

But there’s a plot afoot, led by one of Zhao’s longtime adversaries, mobster Kores Botha (Roland Moller), to destroy the Pearl. Disabling the structure’s automatic safety measures via a tablet computer they stole from Will, Botha and his gang set the Pearl ablaze, leaving Sarah and the youngsters trapped by a raging multi-floor fire, with no one likely to be able to save them except Dad.

He’s not only down on the ground, however, he’s also fallen under the suspicion of the local police, led by Inspector Wu (Byron Mann).

The bonds of spousal and parental love are, of course, meant to be Will’s motivation as he embarks on his herculean rescue, the first step of which involves climbing a nearby construction crane. But there’s more than a whiff of machismo to his various trials and triumphs.

As for the fights he has along the way, they involve people being hurled through glass-top tables, stabbed and strangled. And Botha and his minions have no qualms about threatening to shoot the kids — or throw Georgia to her death, for that matter.

Thus even some grownups will want to avoid “Skyscraper,” especially given the skimpy return it offers to those who do sit through its more savage moments.

The film contains much harsh violence with some gore, a couple of gruesome images, at least one use of profanity and a milder oath, as well as a single rough and about a half-dozen crude terms. The Catholic News Service classification is A-III — adults. The Motion Picture Association of America rating is PG-13 — parents strongly cautioned. Some material may be inappropriate for children under 13.

NEXT: ‘Hotel Transylvania 3: Summer Vacation’ takes a bite out of boredom