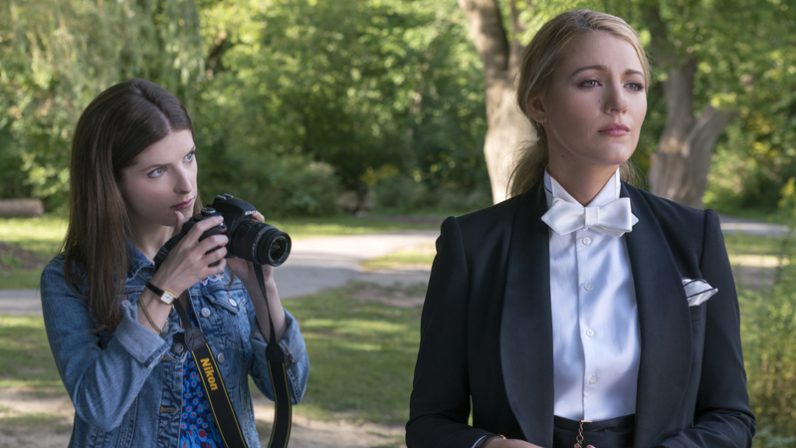 Anna Kendrick and Blake Lively star in a scene from the movie “A Simple Favor. (CNS photo/Lionsgate)

Yet the dark doings, both past and present, that drive the plot of this lurid thriller involve repellent behavior that, while not exactly endorsed by Jessica Sharzer’s script, is not condemned either. Instead, the taboo-breaking is treated as spice to lure jaded viewers.

At the heart of the story are two very different moms. Stephanie Smothers (Anna Kendrick) is a mild-mannered young widow who remains perky and energetic despite her bereavement. Emily Nelson (Blake Lively), by contrast, is a sophisticated, hard-bitten business executive who frequently needs a cocktail by early afternoon (her fondness for martinis entails some product placement for Aviation gin).

Stephanie and Emily’s sons are classmates, and when the kids insist on a play date, it kicks off an unlikely, opposites-attract friendship between the two women, who quickly bond. But then Emily mysteriously disappears.

As Stephanie tries to track her new pal down, she discovers just how little she really knew about her. She also uncovers a tangle of nasty secrets.

“A Simple Favor” — which also features Henry Golding as Sean Townsend, Emily’s novelist husband — sees its characters engage in incest, patricide and fratricide. These activities wind up being presented in the manner of the attractions at a sideshow, as though there were entertainment value in witnessing despicable transgressions.

The movie also displays disdain for fundamentalist Christians — Emily, Stephanie learns, attended a church-sponsored summer camp as a girl. Believers are depicted either as cheerful dimwits or, in one instance at least, as sadistically cruel.

Despite its clever twists and polished look, moviegoers will do themselves a good turn by staying away from “A Simple Favor.”

The film contains gunplay and other violence with little gore, drug use, strong sexual content, including a semi-graphic scene of incest and an off-screen aberrant act, brief rear female and partial nudity, about a half dozen uses of profanity, pervasive rough and frequent crude language. The Catholic News Service classification is O — morally offensive. The Motion Picture Association of America rating is R — restricted. Under 17 requires accompanying parent or adult guardian.

PREVIOUS: ‘The Predator’ loses both its prey and its way

NEXT: Needless profanity mars magical ‘The House With a Clock in Its Walls’