Cartoonist’s comics lighthearted but aim to provoke thought about faith 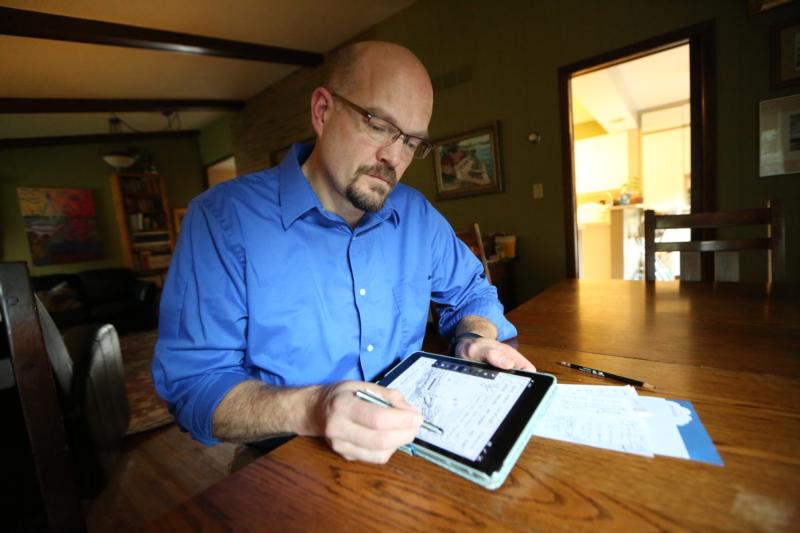 We’re not privy to what our guardian angels say about us, but artist Louis Hall, 54, enjoys imagining their conversations and antics in the comics about life, faith and eternity he creates primarily for young people.

“I don’t think we spend enough time on earth thinking about heaven,” said Hall, a parishioner of St. Joseph in West St. Paul. “I really wanted to illustrate images of what life is like in heaven to get people thinking.”

Hall’s goal for what he calls his “weirdly Catholic,” single-panel comics is to make readers aware of angels, the faith and the consequences of their actions. After circulating his more than 175 comics on social media for six years, he self-published a book of them last year called “Angelic Twaddle.”

With the help of his wife, Becky, and their six children, Hall united his artistic ability and youth ministry experience to develop and market the comics designed to provoke thoughts and laughs, as well as serve as youth group discussion materials.

In 2011, Hall prayed for a way to use his artwork to reinforce the Gospel with young people. “I was also formulating an idea that would travel well through the latest technology, whether it be Instagram, Facebook or Pinterest,” said Hall, who works as a corporate creative director.

Inspiration came from Hall’s often visual explanations of the faith in response to his children’s questions. “I’ve been always aware angels are creatures given to us by God to help us,” said Hall, who believes he’s had encounters with divine providence and angels.

Hall, who has long worked in other artistic media, started drawing the comics by hand, but now he uses an iPad.

The comics appeal not only to teens and young adults, but also adults and younger children, even if the children don’t fully understand them, he said. 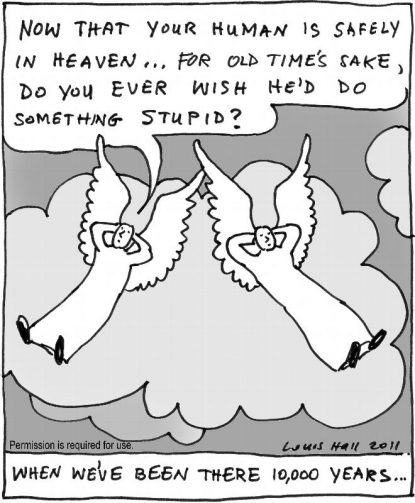 Hall seeks to create unique comics that are lighthearted (“twaddle” means “silly talk or writing”) and playful, but he also aims to address young people’s questions about Jesus, suffering, science and freedom, Hall said. Some comics imagine the role of angels in actual events, such as the 1981 attempt to assassinate St. John Paul II. Others touch on relevant topics, including video games and dating.

The style is reminiscent of “The Far Side” series created by Gary Larson from 1980 to 1995.

“I’m very much interested in capturing their imagination,” Hall said of teenagers. “I didn’t want it to come across as just another variation on our Catechism, but I wanted to sneak up on them.”

Hall told The Catholic Spirit, newspaper of the Archdiocese of St. Paul and Minneapolis, that his comics are meant to be funny, but they’re more like illustrations in an instruction guide than a comic strip.

Explanatory text and questions drawn from the Catechism and YOUCAT youth catechism accompany each comic. A discussion guide he hopes more youth groups will use with the comics is available on his website, AngelicTwaddle.com.

Parents also may find the comics and Angelic Twaddle useful for explaining the faith. Brad and Beth Tressell, both 43 and members of St. John Vianney in South St. Paul, saw Hall’s comics on Facebook and bought “Angelic Twaddle” for their four children. The comics present Catholicism and truth in a lighthearted way, Beth said.

“It’s a good reminder that supernatural things are happening even when we don’t see them,” she said.

Kids are drawn to comic strips, Brad added. “It’s an easier way to read using faith in comics to open a topic or teach something,” he said.

Hall hopes to find a publisher for “Angelic Twaddle” so he can help more young people become aware of angels’ roles in their lives, forming their consciences to understand God’s spirit among them.

“I think it”s very healthy when we know there are bigger things going on than just ourselves,” he said. “In today’s world young people get so focused on themselves and they become the center of their whole world. … I’m just trying to drive home that we’re not alone.”

Hrbacek is photographer/reporter on the staff of The Catholic Spirit, newspaper of the Archdiocese of St. Paul and Minneapolis.

NEXT: Pope calls for new alliance between young, old to change the world