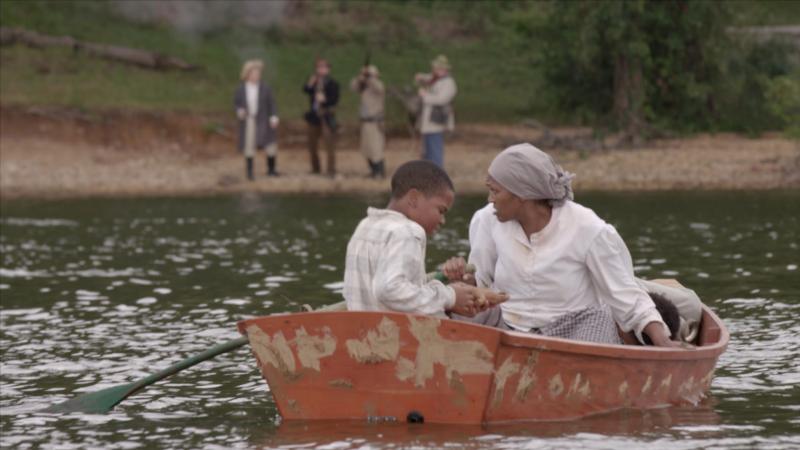 Actress Nina Hibble-Webster, right, portrays Father Augustus Tolton’s mother in the movie “Across,” written and directed by filmmaker Chris Foley of Nashville, Tenn. The short film tells the story of Father Tolton, who was the first African-American priest ordained for a U.S. diocese and who is a candidate for sainthood. (CNS photo/courtesy Director Christopher Foley)

NASHVILLE, Tenn. (CNS) — Father Augustus Tolton, the first African-American priest ordained for a diocese in the United States, was born into slavery and endured myriad obstacles, both inside the Catholic Church and out, as he relentlessly followed his call from God.

Nashville filmmaker Chris Foley, inspired by the story of Father Tolton’s life, has written and directed a short film, “Across,” about the Tolton family’s escape from slavery.

“I spent about three years developing and writing the film, beginning with a short article I read about Father Tolton, then I attended a talk on him in Chicago given by Bishop Joseph Perry in 2015,” Foley told the Tennessee Register, newspaper of the Diocese of Nashville.

Bishop Perry, a Chicago auxiliary bishop, who has family from Nashville, is postulator for Father Tolton’s sainthood cause, which was opened in 2010 by Chicago Cardinal Francis E. George, giving the priest the title “servant of God.”

“It was at the talk that I first mentioned my goal of making a film about ‘Gus’ — as I now call him — to Bishop Perry, but I don’t think he took me seriously,” recalled Foley.

Serious he certainly was because, said Foley, “this is a man who became a role model for priests — black and otherwise — in this country.”

Augustus Tolton was born into slavery in 1854 on a plantation near Brush Creek, Missouri. He was baptized at St. Peter Church near Hannibal, Missouri.

His father left to try to join the Union Army during the Civil War; he later died of dysentery, according to accounts Father Tolton told friends and parishioners. In 1862, his mother, Martha, escaped with her children — Augustus, Charley, Samuel and Anne — by rowing them across the Mississippi River to the free state of Illinois. They settled in Quincy.

While the family was living in Quincy, a parish priest allowed young Augustus to attend the parish school over the objections of white parishioners. There he learned to read and write and was confirmed at age 16.

He was encouraged to discern his vocation to the priesthood by the Franciscan priests who taught him at St. Francis College, now Quincy University, but could not find a seminary in the United States that would accept him.

He eventually studied in Rome at Pontifical Urban University. He was ordained for the Propaganda Fidei Congregation in 1886 at age 31 and was expecting to become a missionary in Africa.

Instead, he was sent back to Quincy, where he served for three years before going to the Archdiocese of Chicago in 1889. He spearheaded the building of St. Monica Church for black Catholics. Dedicated in 1894, the parish grew from 30 parishioners to more than 600 under Father Tolton’s energetic leadership. He died after suffering heat stroke on a Chicago street July 9, 1897.

“In the end, Father Tolton’s story is a great example of suffering, because he never finished a church he was building in Chicago and died at age 43 from heat exhaustion during a heat wave in 1897,” said Foley.

“After finishing my research, we finally started filming in 2017 — eight days total with seven of them in Nashville, and one day in Missouri,” said Foley.

The final cast features all local professional actors, including Daylon Gordon, who was 9 at the time Foley chose him to play the young Augustus Tolton.

Tennessee film locations included Percy Priest Lake and Kentucky Lake — standing in for the Missouri River — as well as Spring Hill and Paris. The Missouri location was Brush Creek.

“None of the African-American cast members were Catholic, and unfortunately there is still a small number of them in the church, but my goal (with the larger film) is to reach non-Catholics as well,” said Foley.

“I did not know any of the details surrounding Father Tolton, nor his life, until I met Chris, but thought this would be a wonderful opportunity to portray such a person,” said Webster.

“We see Martha in her 30s, along with Peter, the father, who died of dysentery while serving in the Union Army, Tolton’s baby brother, Samuel, and his other siblings, Charley, who died at age 10, Augustine and Anne,” said Webster.

Webster described Martha as “humble, but a woman who experienced a leap of faith and took a chance, based on that faith and a split-second decision to run, to accomplish what they did.”

“As a Christian, I view this as a historical piece, and sometimes the only way we get a story like this out there is when someone makes a film from it,” said Webster.

Foley hopes to secure enough financing to extend the short film into a full-length feature film that would cover all of Father Tolton’s life.

“For one thing, we don’t sugar-coat his persecution in the church, and we talk about those people behind it, including (a priest) … who is — let’s face it — the bad guy,” said Foley.

“If we can finally get his story out there, I think its message will be that the church is calling you,” said Foley.

Joan Watson, Nashville’s diocesan director of faith formation, organized a Feb. 17 screening of Foley’s film and a panel discussion to follow at the Catholic Pastoral Center.

“I knew a little about it, having gotten to know Chris and his wife, Mary Beth, several years ago,” she said. “Mary Beth and I discussed doing a screening of the film here, to showcase the immense local talent we have right here in our own diocese, and to introduce people to the story of Father Tolton.”

“While Father Tolton is not directly connected to the history of Nashville, I would encourage people who feel drawn to him to pray through his intercession,” said Watson.

Glover writes for the Tennessee Register, newspaper of the Diocese of Nashville.

NEXT: What’s poetry doing on a page like this? Plenty