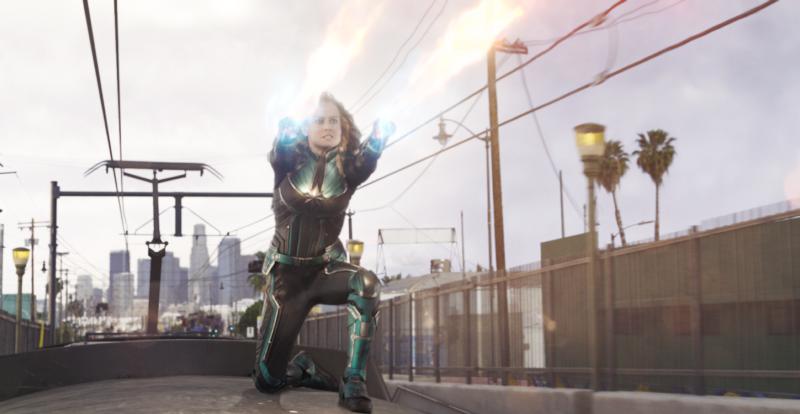 NEW YORK (CNS) — Wit, positive messages and lavish production values buoy the origin story “Captain Marvel” (Disney). While some of the mythos in this adaptation of various strands of Marvel Comics lore, as well as other considerations, make it unsuitable for kids, the film is tame enough to be possibly acceptable for mature teens.

Much of the humor derives from the fact that most of the action is set in a 1995 version of America where Blockbuster Video stores still flourish, people still use payphones and dial-up internet takes forever to connect. The superhero of the title (Brie Larson) arrives in this primitive milieu while faithfully serving the alien Kree civilization that trained her as a warrior.

The Kree are in an ongoing struggle against the encroachments of the Skrull, an imperialist race of shape-shifters who have infiltrated and taken control of a series of planets. Their forces on Earth are led by Talos (Ben Mendelsohn).

Even as she follows her military mentor, Yon-Rogg (Jude Law), on his mission to the Blue Planet, though, Captain Marvel, known among the Kree as Vers, continues to be troubled and confused by persistent flashbacks to a previous life of which she has no coherent memory.

Separated from her Kree comrades, she eventually joins forces with Nick Fury (Samuel L. Jackson), who, in the mid-’90s, is a low-ranking officer in the Strategic Homeland Intervention, Enforcement and Logistics Division, better known as SHIELD. Together they go in search of Dr. Lawson (Annette Bening), the scientist who seems to be crucial both to the intergalactic conflict and to Vers’ missing past.

The need to work for peace and the resilience of the human spirit are among the themes emphasized in co-writers (with Geneva Robertson-Dworet) and directors Anna Boden and Ryan Fleck’s script. Plot complications also teach that time-honored lesson about not judging a book by its cover.

The inclusion of an invisible being called the Supreme Intelligence might confuse youngsters still being formed in their faith, however. While not exactly a substitute for God, this entity, which rules the Kree, certainly has some godlike powers. Older adolescents are unlikely to pay lasting heed to this aspect of the story, though, and may take the elements listed below in stride as well.

The film contains much combat violence, most of it stylized but some of it harsh, fleeting anatomical humor, a few mild oaths, at least one rough term and a handful of crude and crass expressions. The Catholic News Service classification is A-III — adults. The Motion Picture Association of America rating is PG-13 — parents strongly cautioned. Some material may be inappropriate for children under 13.

NEXT: Author’s journey helps readers confront their own privilege