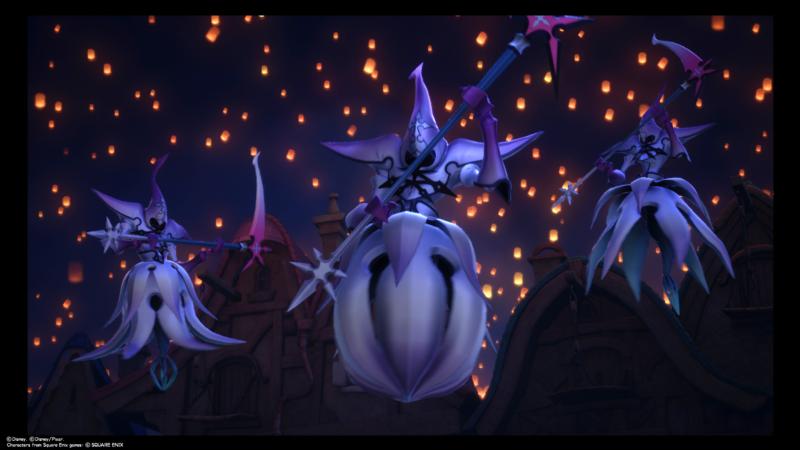 This is a still image from the video game – “Kingdom Hearts III.” (CNS photo/Square Enix)

Over the past 12 installments, teen warrior Sora (voice of Haley Joel Osment) has wielded a weapon called the keyblade in a classic battle of good versus evil, worked out across multiple timelines.

Once again, his villainous opponent is Xehanort (voice of Rutger Hauer) who, together with a group known as Organization XIII, seeks to destroy all known worlds. Yen Sid (voice of Corey Burton), Mickey Mouse’s teacher from The Sorcerer’s Apprentice segment of 1940’s “Fantasia,” prepares Sora and others to thwart Xehanort’s scheme.

Sora travels with Donald Duck (voice of Tony Anselmo) and Goofy (voice of Bill Farmer) to a variety of Disney environments in an attempt to unlock his powers before battling Xehanort. Players visit Andy’s room from “Toy Story,” which has been lovingly re-created, dance with Rapunzel at the festival from “Tangled” and slide the rails of the scream factory from “Monsters, Inc.”

The game time blends with gorgeously animated cutscenes, and players become part of the Disney films they love. “Kingdom Hearts III” also epitomizes the standard wholesomeness on which the Disney empire was built. It has no coarse language or graphic violence, and conveys plenty of positive messages, from coping with bullying to finding redemption and forgiveness.

The cinematics are stunning. However, players will definitely experience some cutscene fatigue, with a total of 12 hours of footage on top of the playing time. Yet the graphics have clearly been designed with care.

In a noticeable change from previous “Kingdom Hearts” titles, mechanics are considerably easier. The game can be played on three difficulty modes — Easy, Standard or Proud — but even Proud mode is not particularly challenging.

Combat is fairly easy to maneuver with Sora’s combos and special attacks, and no single boss battle stands out as being a real struggle. There is an option to disable earning experience, however, which can add to the challenge for players seeking something more.

One fun addition to the mechanics is the “formchange” option, where keyblades have additional capabilities to unlock. These enable them to launch powerful attacks or to transform into cannons, mallets, daggers and more. It’s a fresh system that assists in keeping gameplay entertaining.

Interludes where the game flags are balanced by moments when the story shines. “Kingdom Hearts” fans will be more than satisfied while newcomers will likely be hooked into exploring the previous titles once they’ve experienced the latest.

Playable on PlayStation 4 and Xbox One.

The game contains cartoonish violence and some whimsical magic. The Catholic News Service classification is A-I — general patronage. The Entertainment Software Rating Board rating is E-10+ — for ages 10 and up.