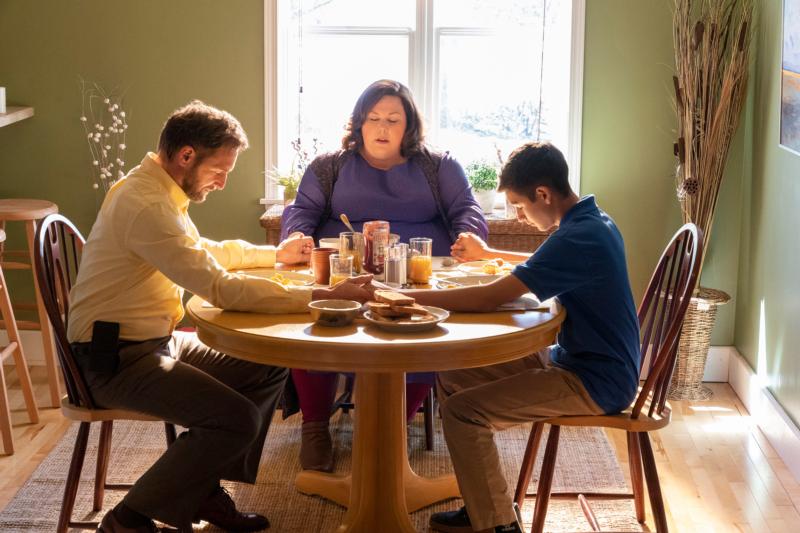 Josh Lucas, Chrissy Metz and Marcel Ruiz star in a scene from the movie “Breakthrough.” The film, opening April 17, is the story of prayer and faith of a mother who, against all odds, believes that God will heal her 14-year-old son and restore him to health after he falls through ice on a frozen lake and is deprived of oxygen for 20 minutes, is without a pulse for 45 minutes and shows no signs of life at the hospital. (CNS photo/Fox)

SAN DIEGO (CNS) — This Easter, a new film promises to tell the real-life story of a person who died and miraculously came back to life.

But it’s not the resurrection story you’re probably thinking of.

“Breakthrough,” which opens in theaters April 17, is about John Smith, a 14-year-old Missouri boy who fell through the ice on a frozen lake, was deprived of oxygen for at least 20 minutes, was without a pulse for 45 minutes, and showed no signs of life after repeated attempts to revive him at the hospital.

Perhaps more accurately, it’s the story of his mother, Joyce, whose prayer over her adopted son’s lifeless body — “Send your Holy Spirit to save my son,” she screams — received an immediate answer: The boy’s pulse registered for the first time on the hospital’s EKG machine.

It’s the story of how, against all odds, Joyce believed that God would heal her son and restore him to perfect health. This, despite the prognosis of a world-renowned physician who didn’t believe the boy would survive his first night at the hospital, and the doubts of even her husband, Brian.

For Chrissy Metz, who plays Joyce, it’s an “overwhelmingly unbelievable” true story, not only because of John’s miraculous return to life but also because of the emotional, spiritual and physical challenges that Joyce had to face throughout this ordeal.

“It’s not easy to be the only person … to believe that her son’s going to survive when everybody, including the doctors, including the entire hospital, knows that there’s just no possible way,” said Metz, best known for her role on the NBC television series “This Is Us.”

She made the comments in a phone interview with The Southern Cross, newspaper of the Diocese of San Diego.

“It’s hard to really put into words, but for me, it’s inspirational, it’s encouraging. I think it imparts hope,” Metz said of the film, which among other things shows an entire community uniting in support of the Smiths.

John’s classmates organize a prayer campaign through social media, and a candlelight vigil is held outside the hospital.

Near the beginning of the film, Joyce Smith is seen at a women’s book study at the Protestant church that she attends. Reflecting on the book they have been reading, she calls the group’s attention to a specific phrase — “to pray boldly” — and asks what they think that means.

Though the group’s meeting is interrupted before she receives an answer, the rest of the film serves to illustrate that very concept.

As Metz sees it, the book study scene reveals that Joyce had prepared herself “long before the incident even happened” by learning how to pray and to make bold requests of God. When tragedy struck, she was ready.

Joyce’s level of trust in God might seem almost superhuman — for her, it’s seemingly impossible to imagine anything short of a miraculous healing; even her family and friends seem to think she is setting herself up for disappointment – but she also has some very human faults.

For one thing, she has a rocky relationship with her new pastor, whose leadership style — and hair style — she disdains; she is unwelcoming when he arrives at the hospital to be at her family’s side. And, when she overhears the hospital’s medical staff and members of her own church community commenting on the likelihood of her son’s death, she responds with impatience and anger.

Describing her as “a force of nature,” Metz explained that Joyce feels that others are either with her or against her, and she isn’t about “to let anybody stand in her way.”

The character also eventually admits that she has a controlling nature and recognizes that she needs to surrender herself and her son’s life to God’s providence, resigning herself to His will, no matter what that entails.

Metz predicts that audiences will find this all-too-human side of Joyce to be particularly relatable.

“It’s not some pretty, wrapped-in-a-bow, faith-inspired and faith-based movie,” she said, “but it’s about a real family and a real woman” who’s “going to do whatever she feels is right, whether somebody agrees with her or not.”

For audiences, Metz hopes the film might serve as a reminder of “the power of love and the power of prayer.”

“I hope that people realize that miracles do happen and the unexplainable happens,” she said.

PREVIOUS: True story behind ‘The Best of Enemies’ a lesson of hope for our times

NEXT: ‘Instant Family,’ ‘Faith Under Fire’ among Christopher Award winners