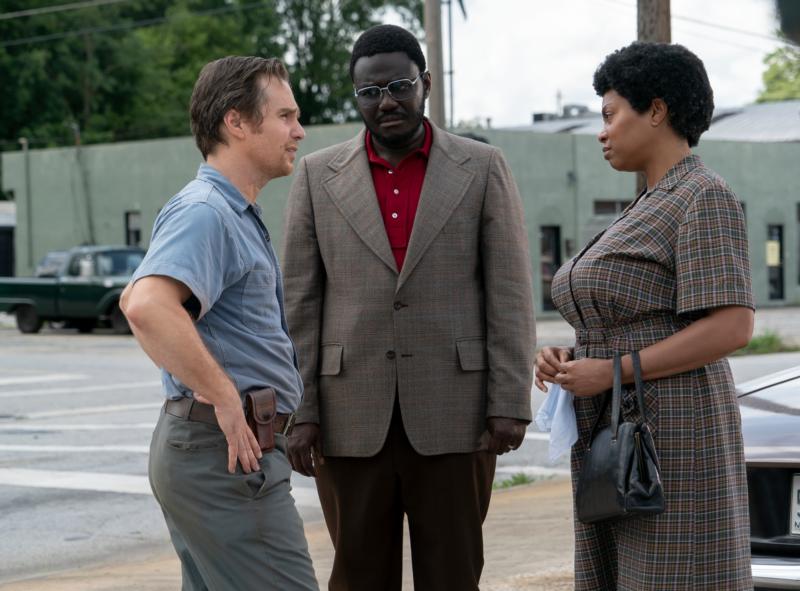 Sam Rockwell, Babou Ceesay and Taraji P. Henson star in a scene from the movie “The Best of Enemies.” (CNS photo/STXfilms)

NEW YORK (CNS) — “The Best of Enemies” (STX) is an appealing fact-based drama that promotes humane values and Gospel-guided behavior. On that basis, many parents may consider it a rewarding film for older teens, the inclusion of some mature material notwithstanding.

The two, who initially want nothing to do with each other, are forced to spend time together as leading participants in an arbitration process deciding the future of the city’s still-segregated educational system. A damaging fire at a black school has brought the issue to a head and Bill Riddick (Babou Ceesay), an expert in mediation, has been brought in to try to achieve consensus.

He sets up a series of meetings collectively called a charette, at the end of which a panel made up of an equal number of blacks and whites will vote on whether to maintain the status quo. As the process unfolds, Ann and C.P. gain insights into each other’s lives and characters.

C.P. begins to question his racist views — which are based, in part at least, on the fact that he has always avoided having any dealings with African Americans. The gas station he owns, for example, will not serve black customers.

For her part, fiery Ann comes to see that C.P. is not entirely evil. In fact, in some respects, he’s quite vulnerable.

This is particularly true with regard to one of his three sons, a developmentally disabled lad confined to a home for whom C.P. cannot afford the kind of care he would like. Ann, who carries a Bible with her and says grace before each meal, intervenes with a friend on the staff of the facility where the boy lives to bring about an improvement in his situation.

Though C.P. at first reacts to this thoughtful gesture with disdain, not wanting to be indebted to Ann in any way, in the long term it becomes an important turning point in the evolution of his outlook. His gradual change of heart, which will ultimately have very positive consequences, also is encouraged by his sensible wife, Mary (Anne Heche).

Bissell evokes strong performances from his fine cast and his picture’s themes of reconciliation and equal dignity for all will be on target for believing moviegoers. The story he tells might seem pat if it were not derived from real events. As it is, viewers can come away from “The Best of Enemies” hopeful, despite the many fraught and contentious circumstances of our own era.

The film contains some nongraphic violence, including gunplay and the threat of rape, an act of sexual aggression, a few uses of profanity and of crude and crass language and racial slurs. The Catholic News Service classification is A-III — adults. The Motion Picture Association of America rating is PG-13 — parents strongly cautioned. Some material may be inappropriate for children under 13.