No ‘Hesburgh’ picture without ‘Catholics vs. Convicts,’ filmmaker says 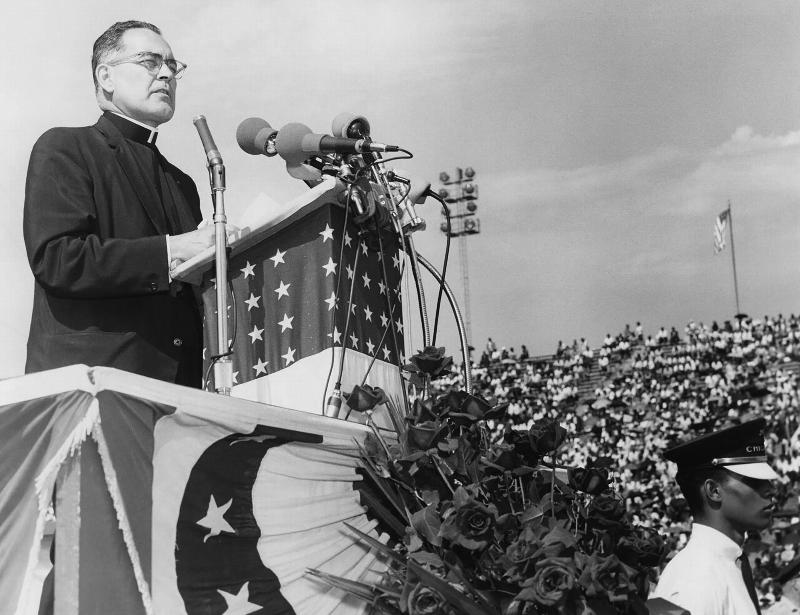 This image is part of the new documentary “Hesburgh,” about Holy Cross Father Theodore Hesburgh, the priest who led the University of Notre Dame for 35 years. Director Patrick Creadon and his crew spent two and a half years making “Hesburgh,” which opens May 3 in 35 U.S. cities. (CNS photo/courtesy OCP Media)

WASHINGTON (CNS) — Patrick Creadon, who made the new documentary “Hesburgh” about Holy Cross Father Theodore Hesburgh, the priest who led the University of Notre Dame for 35 years, said that film wouldn’t have been possible had it not been for a feature he made three years earlier for ESPN, “Catholics vs. Convicts.”

The latter documentary chronicled the buildup to a legendary Notre Dame vs. Miami football game played at Notre Dame in 1988. Both teams were undefeated, Notre Dame won 31-30, and the infamous T-shirt that gave the film and the rivalry its nickname had been made by Creadon’s roommate at Notre Dame, where both were seniors.

The show debuted on ESPN in 2016. Father Hesburgh had died the year before.

Instead, Creadon and his crew spent two and a half years making “Hesburgh,” which opens May 3 in 35 U.S. cities with the promise of more cities in following weeks. “I never thought of his story as just a Notre Dame story. I always thought of it as an American story.”

Creadon said: “I think the fact that we had made the ESPN film really helped us.” He described it as “an olive branch” to the two schools, even getting a handwritten thank-you note from Jimmy Johnson, then the Miami coach, who is now a studio analyst on the Fox network for pro football.

“To be honest with you, when we started making ‘Hesburgh,’ I was somewhat disappointed — although not totally surprised — that few people knew who he was. Now, his name is going to live on forever in the Notre Dame community and the Notre Dame family,” Creadon said. But “step out of the Notre Dame community, and the name recognition falls off,” he added. “Catholics know who he is, a little bit. … It would be a terrible loss to let his story fade away.”

Even though he’s a Notre Dame grad, “I didn’t get into this line of work to make puff pieces about people,” Creadon said. “We looked, really, for missteps along the way. We researched 12 or 15 archives around the country. We dug and dug and dug. At the end of the day, he’s an individual who lived an extraordinary life. And certainly, as much I am disinclined to do a puff piece for someone, I am also disinclined to become a muckraker or find things that weren’t there.”

“Hesburgh” follows its subject not through every part of his peripatetic presidency, but frames it largely around his work on the U.S. Civil Rights Commission, to which he was appointed by President Dwight Eisenhower and, as commission chair, forced to resign by President Richard Nixon after Nixon’s 1972 reelection because the commission had named the federal government as the biggest danger to civil rights due to lax law enforcement.

The civil rights commission was just one of 16 federal commissions on which Father Hesburgh sat. He also was awarded 150 honorary degrees. “That’s in the Guinness Book of World Records,” Creadon told CNS.

He added: “I think anyone who plans to vote in 2020 and is looking for a different kind of leadership, a different style of leadership, this film is a very good first step in considering what very strong, wise, kind leadership can look like. Hesburgh was one of utmost influential men in America for decades. Joe Biden once called him the most powerful unelected official in Washington. He never raised his voice. He certainly didn’t swear. He was decent and kind and he was a gentleman, even to people who were his most powerful adversaries.”

“Hesburgh” got its debut April 26 in Chicago and South Bend, Indiana, home to Notre Dame. Creadon grew up in Chicago; his father and grandfather went to Notre Dame. His college roommate, the T-shirt maker, still lives in Chicago and has found success in the business world. “We’re best friends,” Creadon said. “We stood up at each other’s weddings. His daughter is my goddaughter.”

And in South Bend, where Father Hesburgh’s name still resonates, interest in the film was so strong at one multiplex that it pushed aside a pair of opening-night showings of “Avengers: Endgame” to satisfy the need for “Hesburgh” tickets.

“The Walt Disney Co. is going to do just fine,” Creadon said. ” But in South Bend, Indiana, Father Ted took away two of the Avengers’ screens to meet the desire of their customers.”