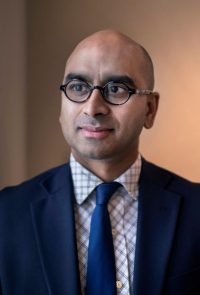 Randy Boyagoda, principal and literature professor at St. Michael’s College of the University of Toronto, is pictured in an undated photo. (CNS photo/courtesy Randy Boyagoda)

TORONTO (CNS) — Canadian author and educator Randy Boyagoda hopes an upcoming trilogy of novels will add to the tradition of what he terms “the good/bad Catholic” narratives.

Boyagoda, principal and literature professor at St. Michael’s College of the University of Toronto, is set to release his latest novel “Original Prin” in the United States in June. The book was released in Canada late last year.

The story involves a middle-aged Catholic university professor looking to live his faith while helping secure financial support for his cash-strapped educational institution. Trading on the book title’s similarity to Original Sin, “Original Prin” is just one part of the author’s playfulness with his serious but humor-filled prose. The name Prin is a short form of the protagonist’s full name, Princely St. John Umbiligoda.

Parts two and three of the trilogy will expand the story as protagonist Prin seeks to be true to the faith amid increasing secularism and the diminishing influence of religious faith in general.

“One of my ambitions for the trilogy in the American context is that I have written a good-bad Catholic novel,” Boyagoda told Catholic News Service. “So Prin is serious about his faith, he stumbles and falls, he makes mistakes, but he is trying. And I think there is a whole tradition of good/bad Catholic novelists — Graham Greene, Evelyn Waugh, etc. So, I am trying to do a version of the good-bad Catholic novel for the 21st century. That, I think, is the distinctiveness of this book.”

Early in the “Original Prin” story, Boyagoda offers a glimpse of his protagonist’s ongoing struggle to make sense of his belief: “When he was a boy, Prin would demand that God prove he was truly there in church by making the candles on the altar flicker. Then, going back and forth between hope and terror and feeling vindicated both ways, he would close his eyes for long stretches. He never told anyone about his chancing with God like this. If he did, some grown-up would have ruined the whole thrilling, secret dare of it.”

“Original Prin” is the third novel and fourth work in Boyagoda’s unique canon. Previous novels, “Governor of the Northern Province” (2006) and “Beggar’s Feast” (2011), while not focused primarily on Catholic faith implications, still offer hints of suffering, life struggle and redemption in their overall message.

Prior to the Canadian release of “Original Prin,” Boyagoda garnered more attention with a detailed biography of Father Richard John Neuhaus, founder of First Things magazine and a prominent Catholic intellectual who popularized the notion of Catholics expressing their faith in “the public square” rather than hiding their lights under a barrel.

“Richard John Neuhaus: A Life in the Public Square” (2015), details Neuhaus’ emergence as a one-time Lutheran minister and convert to the Catholic faith to become a leading apologist for the proclaiming the Gospel without filters of moral relativism. For Boyagoda, the biography of Neuhaus, plus his two previous novels, played an important role in preparing the way for the upcoming good-bad Catholic trilogy.

“The biography of Neuhaus, a different story of course than fiction, clearly focuses in an explicit way on questions related to Catholicism in the modern age,” Boyagoda said. “… I wrote two novels that were works of serious and satirical literary fiction informed by any number of components, including faith, and then I spent two years writing about someone else’s life in great detail, and by the time I came to the newest novel (‘Original Prin’), I was more open than I’d ever been before to engaging more fully my personal experiences,” including family life and faith.

Boyagoda is not shy about being identified as a Catholic writer and commentator despite the recent tendency to shy away from exhibiting any kind of religious faith in a secularized popular culture. Nor is he concerned that novels with overtly “Catholic” themes might limit his appeal to a wider reading public.

“Part of my vocation is to be an active and contributing member of our public life, as a committed Catholic,” he said. “When it comes to writing novels, I have discerned that it’s right for me to be published by a secular publishing house; that it is right for me to be writing about my experiences for the New York Times and other newspapers. It seems to me to be a kind of bearing witness; you can be both a believer and a thinker/storyteller, so I think in a way Father Neuhaus’ faith in the public square idea really did speak to me — this idea we are called to make contributions that are religiously informed and are publicly available.”

At the same time, Boyagoda holds fast to the view that any writer’s first priority is to his art. When asked if Catholic writers might feel pressure to use their gifts for evangelization or faith teaching, Boyagoda draws the line.

When not researching and writing new fiction, Boyagoda serves as principal of St. Michael’s College of the University of Toronto. He teaches one course a year for the English department and heads the college’s Gilson Seminar on Faith and Ideas project. The Gilson seminar offers first-year students an opportunity to explore the intersection of faith and contemporary social and cultural issues. The father of four daughters, Boyagoda and his wife, Anna, attend weekly Mass at Corpus Christi Parish in Toronto.

Boyagoda offered an anecdote that speaks to the void in contemporary culture for issues of faith and belief.

“I was an event at a university a few years ago, and I noticed at the center of the podium was a bare bright space. And I was staring at it throughout the lecture, and what I realized was that the bare space was the shape of a university crest. And if you had to guess, as I did, there was probably a religious symbol in that missing crest. I thought it was a striking demonstration of what it means to live in the secular here and now, that someone decided to pry it off, because it was part of a time, world and sense of thinking that this place doesn’t want to be associated with anymore, but they had nothing to replace it with.”

Not only did that symbolic void encourage Boyagoda to begin work on “Original Prin” and the trilogy, it also drove home the need for writers, particularly Catholic writers, to strive for more meaningful themes. The goal of any writer, Boyagoda believes, is to reach as wide and engaged an audience as you can, and to do that successfully requires a certain kind of depth. For Boyagoda, that depth comes from two sources: his Catholic faith and its impact on the understanding of the how one sees the world around him.

“I am a practicing Catholic, academic, father, husband, family man, who is trying to make sense of what it means to believe in the here and now, and be part of the world as it is,” he added. “So, don’t enjoy my novel because you’re a Catholic. Enjoy my novel because it’s a good novel.”

PREVIOUS: No ‘Hesburgh’ picture without ‘Catholics vs. Convicts,’ filmmaker says

NEXT: Video game may have a role in Notre Dame reconstruction