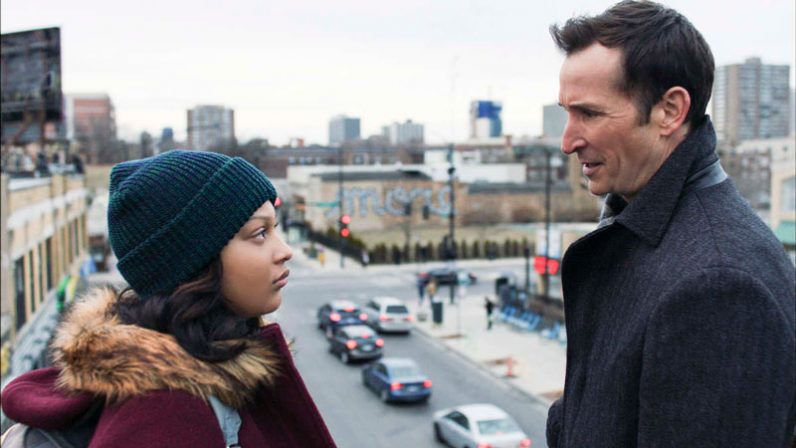 NEW YORK (CNS) — Ava DuVernay, the director of such acclaimed films as “Selma” and “13th,” is one of the executive producers of the CBS limited-series drama “The Red Line.”

Well meaning, but overwrought and morally problematic, the eight-part show debuts with back-to-back episodes Sunday, April 28, 8-10 p.m. EDT. It continues in that time slot through May 19.

Erica Weiss and Caitlin Parrish created the series, which opens as Chicago-based African American emergency room doctor Harrison Brennan (Corey Reynolds) stops at a convenience store to pick up some milk on the way home after his evening shift.

In the wrong place at the wrong time, Harrison attempts to aid a cashier (Tony Peera) who has been assaulted during an armed robbery. His proximity to the clerk, skin color and gray hoodie make the physician appear suspicious to Irish Catholic cop Paul Evans (Noel Fisher).

Rushing into the store, Paul shoots Harrison without warning in the back, killing him. Six months later, Daniel Calder (Noah Wyle, “ER”), who considers himself to have been Harrison’s spouse, and the duo’s 17-year-old adopted daughter, Jira (Aliyah Royale), are still grieving and seeking justice for Harrison.

Indignant Jira understandably feels that, as a white man, Daniel can’t relate to her fear that what befell Harrison will also happen to her. And Jira wants to reconnect with her birth mother. “This is gonna happen to me,” Jira says to Daniel. “I need someone who knows how it feels.”

Her biological mom is 32-year-old Tia Young (Emayatzy Corinealdi). A younger Harrison persuaded 15-year-old Tia to let Daniel and him adopt her baby. Harrison also reassured the adolescent mother that she would “come back from this.”

Now married to Ethan Young (Howard Charles), a conductor on the Red Line of Chicago’s “El” trains, and the mother of 6-year-old Benny (Maximus Chase Evans), Tia is back in her South Side neighborhood and determined to improve its residents’ quality of life. So she launches an upstart effort to become her district’s alderman.

The campaign pits her against veteran black politician Nathan Gordon (Glynn Turman). Tia and Jira’s reconnection jumbles and complicates their personal lives as well as both the Calders’ fight for justice and Tia’s.

For his part, Paul struggles, with little help from the force’s “Irish brotherhood,” to come to terms with his tragic mistake. His father, Gary (Connor O’Farrell), and brother, Jim (Michael Patrick Thornton), both police officers themselves — the latter disabled from an injury he suffered on the job — don’t believe Paul did anything wrong.

Jira and Daniel, on the other hand, will only be satisfied when Paul loses his job. Unable to atone, Paul becomes progressively more embittered and alienated.

“The Red Line” portrays some strong, though not gratuitous, violence, and the dialogue is consistently peppered with mild vulgarity. But it’s the sexual content that primarily restricts its appeal for viewers of faith.

The series affirms Daniel and Harrison’s union as a marriage, and uncritically accepts their adoption of Jira. It also depicts transgenderism, adultery and some sensuality. Though the encounters shown are not graphic, the fact that they take place between men will especially jar those in the audience not accustomed to seeing such behavior on network television.

Much of the program’s treatment of racial issues is far more acceptable from a Catholic perspective, as too is the role played in the drama by Paul’s parish priest, Father Joe Billick (Peter Moore). In one scene, Father Joe gives an acute analysis of the phases of confessing sin which, he counsels Paul, should begin with disclosure, move on to contrition and end with atonement.

Paul ultimately proves unable to grapple with his guilt, however, and the narrative offers him no opportunity for redemption. This is both a moral and aesthetic flaw since it suggests that the writers believe that some human beings are beyond forgiveness — a message clearly at variance with the teaching of the Gospels.

Thus, despite Tia’s assertion that “there’s no better answer to the darkness than to find more family,” it’s clear that “The Red Line” puts some permanently beyond the pale of inclusion in the widening clan she imagines.

PREVIOUS: ‘Penguins’ shows the pluck of the coldest birds

NEXT: Sweeping, 3-hour epic ‘Avengers: Endgame’ sends off its heroes