‘The Burial of Kojo’: A family’s love in a magical realm 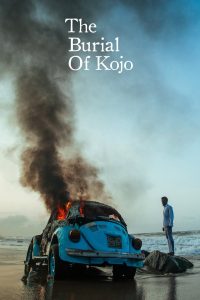 NEW YORK (CNS) — Set in Ghana and shot on a minimal budget, the often enchanting yet somewhat opaque fable “The Burial of Kojo” is currently streaming on Netflix. Written and directed by Ghanaian-American hip-hop artist Samuel “Blitz” Bazawule — better known by his stage name, Blitz the Ambassador — this debut film is recorded in English and Ghana’s Twi language with subtitles.

Esi (Ama K. Abebrese), now a grown woman, narrates the tale of her life as a girl (Cynthia Dankwa) with her dad, Kojo (Joseph Otsiman), and mother, Ama (Mamley Djangmah). As the film begins, the narrator recalls a bad dream that her father had repeatedly over a period of seven years.

In it, a blue Volkswagen, at the ocean’s edge, catches fire as Kojo stands by helplessly. The “sea swallows the earth,” Esi says, “and a raging fire burns.”

It was “more like a memory, a tragic memory he could never forget,” she continues. Attempting to escape this nightmare prompted Kojo to move to a village surrounded by water. “This,” the narrator says, “is where our story begins.”

The idyllic and placid setting conduces to Kojo’s marriage to Ama. When this union was joined, “the frogs sang a melody so beautiful the pond lit up and flowers bloomed,” Esi says. And, of her birth, the daughter observes that her father experienced “a vision so magical he couldn’t explain it. Golden droplets rained from the heavens.”

Esi says the village soothsayers believed she would become a sign “of prosperity and good luck,” to her family. But good fortune doesn’t appear to be in the offing. With the introduction of Kojo’s older brother, Kwabena (Kobina Amissah-Sam), the action shifts to an urban area, with Kwabena urging Kojo to find more lucrative work there to support his family.

It’s important to note that in “The Burial of Kojo” time isn’t necessarily linear, the past coexists with the present, and people who appear to be alive may, in reality, exist fluidly between this life and the next. This universe, as the narrator says, is “where the sky meets the earth, and people walk upside down.”

The siblings’ reunion revives an old grudge between them over a tragedy involving Adwoa (Zalfa Odonkor), a woman they both loved who had chosen Kwabena over Kojo. The older brother also influences the younger to get involved in working an illegal gold mine.

When Kojo falls to the bottom of a mine shaft, Esi travels though the spirit world to discover what has happened to her beloved father.

Some violence, drinking and nightclub atmospherics as well as non-scriptural notions about the spirit world and the afterlife suggest “The Burial of Kojo” isn’t suitable for young children. Given that it’s admirably free of coarse language and sexuality, however, the movie is appropriate fare for adults and well-catechized teens.

From the outset, Abebrese’s narration will entrance viewers, thoroughly engrossing them in the story’s unusual world.

The idea that the dead continue to exist in order to help the living transition to the next life doesn’t, of course, conform to Catholic teaching — except perhaps as a variant on the communion of saints. “The Burial of Kojo” will, nonetheless, give viewers an insight into, and appreciation of, the indigenous beliefs of Esi’s culture.

Catholic viewers, moreover, will note that certain characters hold rosary beads as they pray for Kojo’s deliverance. This moment illuminates one of the film’s principal strengths: the deft juxtaposition it creates, for a non-African audience, between the unfamiliar and the instantly recognizable.

Viewers may sometimes feel a little lost as they attempt to navigate the film’s in-between realm and will need to muster patience as they await explanations. To its credit, however, “The Burial of Kojo” never becomes so fantastical that it loses credibility.

In the end, the film is a memorable affirmation of filial love, and shows how Esi’s abiding devotion to her father ultimately revealed to her how magical life can be.

PREVIOUS: Video game may have a role in Notre Dame reconstruction

NEXT: ‘The Hustle’ recasts ‘Scoundrels,’ with taste of reheated leftovers