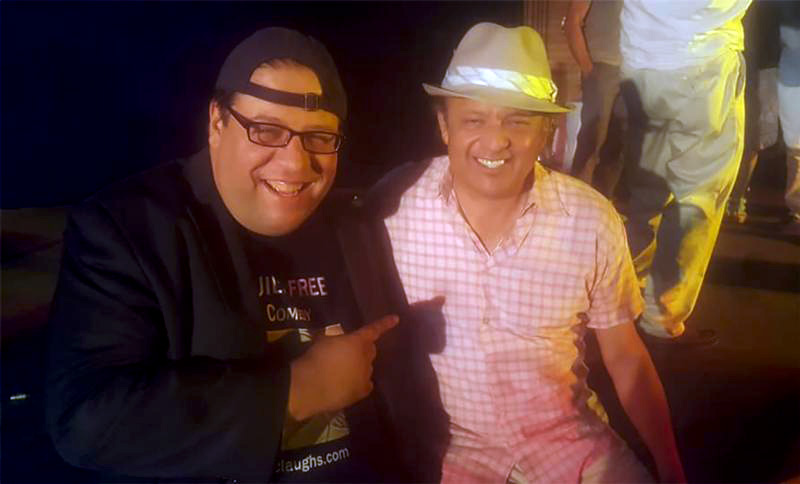 WASHINGTON (CNS) — Parishes can literally laugh their way to the bank, raising up to $4,500 in one night of comedy with the Catholic Laughs organization.

Catholic Laughs is a national traveling comedy show, featuring clean comedy with comics from major late-night shows. Co-founders Carl Kozlowski and Scott Vinci then spend the evening cracking jokes along with their guest.

The duo charges either an in-advance, negotiable fee to the parish, which the parish usually at least doubles in ticket sales, or they split ticket sales at the door.

It all began when Kozlowski stayed home sick in the third grade. Without his parents to monitor the remote, young Kozlowski was free to roam the channels, and, being a young hell-raiser, Kozlowski was naturally attracted to “The David Letterman Show.”

“His morning show was so nuts I didn’t believe what I was watching,” Kozlowski told Catholic News Service in a phone interview from Los Angeles.

“I have always been a bit devious in innocent ways, and I figured out I could get away with being sick every three weeks about so that I could watch that show.”

For Kozlowski’s now business partner, Vinci, comedy slowly simmered into his life before he could remember being conscious of it.

“I remember one year, I dressed up as Groucho Marx for Halloween,” Vinci said. “I don’t think anyone else knew who I was or what I was doing, but I just thought it was funny because he was funny. I was probably 5 or 6.”

Both spent years working in “Dilbert jobs,” as Kozlowski dubbed them, then as condo managers, and as journalists, while wading through the sewers at the dead bottom of the comic world, performing night after night before audiences of seven slightly intoxicated people in seen-better-days joints like “Comedy Womb: Where the great ones are born.”

Finally after some therapy to recover from all of that, both Kozlowski and Vinci emerged from the cesspool at the bottom of the entertainment industry as successful, sometimes even lucrative, craftsmen in their trade: comedy.

The two met at an open mic night in Chicago, and worked together for a while before they began Catholic Laughs.

“I think it helps build community,” Vinci said, “and it is just an easy fundraiser. They don’t have to set up a lot of stuff. They have a parish hall with a light and a mic. They don’t realize how easy it is until we come.

Vinci and Kozlowski are committed to clean comedy, both in their work with Catholic Laughs and in their outside gigs. Kozlowski explained their philosophy on clean comedy through the analogy of a deodorant commercial. An old Secret commercial advertised their product as “strong enough for a man, but made for a woman.”

“We are the same way.” Kozlowski said. “We don’t ever dumb down what we are doing, we just make it as funny as we can, but we know how to control our mouths. We are really creating these shows for adult mentality, but there is never anything you have to be embarrassed about hearing.”

Vinci added that, contrary to popular belief, it is not necessarily more difficult for a comedian to keep his act “clean” in the industry. Rather, clean shows cultivate a broader appeal, and usually result in more gigs.

Besides the monetary gain they associate with clean comedy, both Vinci and Kozlowski added that their Catholic upbringing never quite allowed them to depart with clean comedy with a clear conscience.

“Both my parents are gone, but I still have this thing in the back of my mind, what would they want to hear,” Vinci told CNS. “There is a part of me that would love to make them proud, and I have to feel good about it, and I would love to have them in the audience laughing along.”

Kozlowski recounted that, when he was just starting out and most vulnerable to falling into the cuss trap, his parents found creative ways to keep tabs on him, ensuring that his comedy remained pure.

“My dad told everyone every time I had a show to come see it, partly to encourage me but partly to spy on me. I better not even swear once. It came naturally to me right off the bat,” Kozlowski said. “I found that it is an advantage, even though people are sometimes dirty in clubs, every club that I have had a major opportunity with, they’re like ‘wow, you don’t swear and you funny,’ and they say they appreciate that because it stands out.”

Though they are dedicated to Catholic Laughs, both Kozlowski and Vinci continue to try to advance their careers.

Vinci continues to pursue a career as a comedic actor, while Kozlowski is working on a sitcom that chronicles his real-life narcolepsy problems, “Dozed and Confused,” which he hopes will premiere on Netflix. He also hosts a radio show, “Man UP,” in which he and his co-host talk about how men can navigate the crazy changes in the world from a Christian perspective.

PREVIOUS: When you watch TV, your TV may be watching you

NEXT: Gamers rebuild after atomic devastation in ‘Fallout 76’