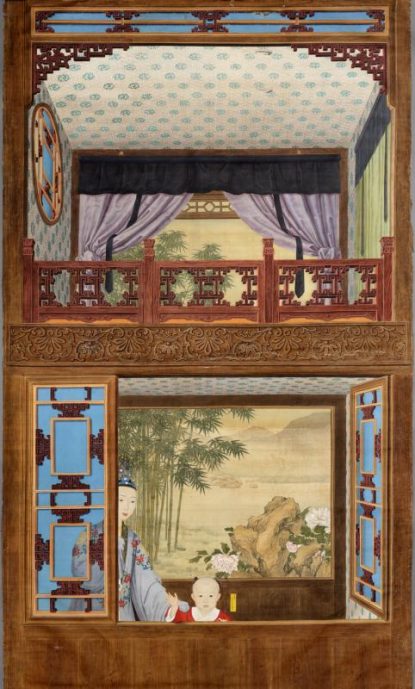 This is a painting (circa 1760s) of the consort of the Qianlong emperor and the future Jiaqing emperor in his boyhood. It was probably done by Giuseppe Castiglione, a Jesuit, and other court painters. (CNS photo/Beijing’s Palace Museum via Smithsonian’s Freer-Sackler)

WASHINGTON (CNS) — Visitors to Smithsonian art museums in Washington got a special treat this summer when an exhibit on Chinese empresses also featured a rare display by two Jesuit missionaries whose artwork was in the past largely seen only by royalty and high government officials.

The Empresses of China’s Forbidden City exhibit, on display March 30-June 23 at the Freer-Sackler galleries, the Smithsonian’s museums of Asian art in Washington, included the work of Jesuits Giuseppe Castiglione and Ignatius Sichelbarth, 18th-century missionaries, who offered their artistic services to the imperial court.

“This assemblage of objects has never been seen before,” said Jan Stuart, a historian and the gallery’s curator of Chinese art, during one of the last gallery tours of the exhibit June 22. “They will be all be packed up and sent away and never be looked at again — at least not this way.”

The majority of the paintings and objects on display were in the past only seen inside the Forbidden City, a palace complex where China’s emperors and their families lived from the 1400s until the early 1900s.

The Washington exhibit focused on the lives of the powerful women who unofficially ruled or greatly influenced the emperors and showed a rare trove of objects that included wedding robes, wall-size portraits of the women, jewelry and daily household items, such as plates with colors that only women in certain ranks could use.

The Italian Jesuit Castiglione, who adopted the name Lang Shining (Peace of the World), had one of the most commanding portraits of the women in the exhibit, a wall-size hanging silk screen of the saffron-robed Empress Xiaozhuang, painted around 1750, which depicts her holding a strand of beads, almost like a rosary, referencing her great influence in spreading Buddhism as the prevalent religion of the court.

Castiglione’s portrait shows her with legs spread under the robe, a commanding athletic appearance, shoes peeking out, “sitting in a pose like a man,” said Stuart during the tour.

“She was greatly revered to have this size portrait,” she said. “Look how large it is, look how loud it is. She’s sitting in a throne with dragons. … You can see in this portrait, she had it all: strategy and a certain health and a religious dimension in her life, she had it all.”

Castiglione’s work took up a second wall at the gallery with a ceiling-to-floor screen portrait of Empress Xiaoyichun, consort of Emperor Qianlong with the future Emperor Jiaqing as a child, believed to have been painted in the 1760s. The painting, which looks as if the mother and child are looking at the viewer from the bottom window of a two-story structure was created for private quarters, Stuart said. The spread curtains on the top floor give the sensation that the viewer is looking at a large window leading to the outdoors with a lake and mountains in the distance.

Chinese royalty sought out artists that would bring a different and worldly perspective to their lives, Stuart said, and Brother Castiglione’s paintings, while maintaining a Chinese style, brought something different to the interior of the palace.

“It’s not typical Chinese perspective,” Stuart said, and it reflects a cosmopolitan aspect that the rulers wanted, because even though they had Chinese court painters, “they also had Jesuits from Europe practicing at court and they brought in new art styles as well as some scientific information. … What we don’t know is, is the artist playing with us? What they loved is the fresh perspective.”

Castiglione also had a smaller, but equally notable oil on paper portrait of the Empress Xiaoxian, wife of Emperor Qianlong, in the exhibit. Painted around 1736, the portrait focuses solely on the face of the empress set in a charcoal-colored background.

“He was a highly accomplished painter. He was both precise and realistic in his paintings. I would even say that he was one of the best-known missionary Jesuits in China after Matteo Ricci,” said Jesuit Father Paul Mariani, of the Department of History at Santa Clara University, in a June 21 email with Catholic News Service.

The German-Bohemian Jesuit Sichelbarth, who used the name Ai Qimeng, also had prominent portraits in the exhibit: two large hanging scrolls of Empress Dowager Chongqing, painted in 1771, and one of Empress Xiaoxian, painted in 1777, possibly in collaboration with Wang Ruxue.

The portraits feature the elaborate and colorful robes of the empresses, many designed to accommodate their activities as expert equestrians, and Sichelbarth portrayed them in powerful poses, hinting at their unspoken power and influence behind the scenes during the last dynasty of China.

“We wanted to tell a story that had never been told before, a story that looked at the significance of empresses in shaping the history of the Quing court, a direct legacy of modern China,” said Stuart. “Despite the fact that history tends to be male-centric, women contributed in big ways.”

Though it was clear that producing a male heir was the main purpose society put forth before the women, the exhibit, along with the work of the Jesuit painters, captured the message the gallery, in a news release, said it wanted others to see: “The exhibition breaks stereotypes by showing the empresses’ influence in the realms of art, religion, politics and diplomacy. In actively recovering their position, we are reminded that history often leaves women’s accomplishments untold.”

NEXT: Viewers won’t forget ‘Rolling Thunder Revue,’ even if Bob Dylan does