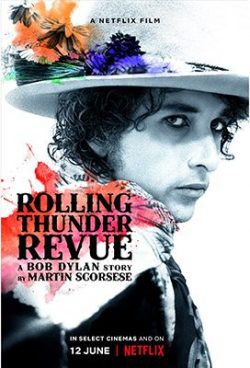 NEW YORK (CNS) — A tip for viewers: All isn’t as it seems in storied director Martin Scorsese’s “Rolling Thunder Revue: A Bob Dylan Story.” A purported documentary infused with fictitious elements, the fascinating, evocative and revelatory film is currently streaming on Netflix.

The movie recalls the iconic musician’s eponymous tours along the East Coast in the fall of 1975 and through the South and West the following spring. In ’75, Dylan reconnected with some of his Greenwich Village cohorts, including poet Allen Ginsberg (1926-1997) and singers and songwriters Joan Baez and “Ramblin'” Jack Elliott.

For the revue, Dylan envisioned a series of shows in small, intimate settings, reminiscent of the coffeehouses in which these performers got their start — as, too, of course, did he. From Ginsberg’s perspective, it was the headliner’s way: “to show how beautiful he is by showing how beautiful we are.”

These artists had been at the epicenter of some of the dramatic changes affecting the country in the decade or so leading up to the tours: the folk revival, the civil rights movement and protests against the Vietnam War. Now, as the nation celebrated its bicentennial, many Americans had become disillusioned by Watergate and the fall of Saigon.

“People,” Dylan says, “had lost their sense of conviction.”

Thus the Revue performances became a way for these kindred souls to re-invent themselves. “Life isn’t about finding yourself or finding anything,” Dylan says. “Life is about creating yourself and creating things.”

This is the veteran director’s second film about Pulitzer and Nobel Prize-winner Dylan. His documentary “No Direction Home” first aired on PBS’ “American Masters” series in September 2005. Utilizing D.A. Pennebaker’s 1967 film “Don’t Look Back,” Scorsese explored the fallout from Dylan’s decision to transition from folk to rock, a shift in style that alienated many fans.

In a series of interviews, Van Dorp reflects on his experiences chronicling the Revue performances. The manufactured name and Dylan’s joke about the director eating too much on the tour should help viewers clue in to the fact that this is all what used to be called, in the 1960s, a “put-on.”

But von Haselberg, a veteran performance artist and husband to Bette Midler, plays his part so seamlessly it’s easy to understand how some in the audience may be fooled by the illusion. In reality, the source footage is taken from “Renaldo and Clara,” Dylan’s four-hour-long 1978 film about both the Revue and the roughly contemporaneous breakup of his first marriage.

Actress Sharon Stone also contributes to the deception as she reflects on the time she putatively spent on the East Coast tour while a 19-year-old model.

As might reasonably be anticipated in a film about rock musicians, vulgar language is frequently deployed. There are also discussions of illicit drug use and sexuality as well as some fleeting nudity. “Rolling Thunder Revue” is thus best suited to grown-ups.

Such mature viewers should avoid becoming overly concerned with what’s fact or fiction in the film, especially given Scorsese’s stated intention to “conjure up” the essence of these fabled tours. They should focus instead on enjoying the numerous evocative moments his movie offers.

There’s the tender and sweet scene, for instance, of Dylan and Ginsberg reading the poetry of their mutual idol, Jack Kerouac, at the late Beat writer’s Lowell, Massachusetts, grave. And singer-songwriter Joni Mitchell captures the spirit of the times — and the improvised character of the Revue — with her recollections.

Mitchell recalls how she initially showed up for just one show but then stuck around for the remainder of the East Coast tour. The experience inspired her classic song “Coyote,” which she is seen honing as Dylan accompanies her.

As “No Direction Home” did so well, “Rolling Thunder Revue” also captures Dylan’s astonishing verbal dexterity via the 34-year-old’s crisp performance of “The Lonesome Death of Hattie Carroll.”

Now 78, Dylan remains an enigmatic and compelling figure, ironically observing, at one point: “I don’t remember a thing about Rolling Thunder.” After watching Scorsese’s impressive retrospective, viewers will not be able to say the same.

NEXT: ‘The Lion King’ roars back to screens in ‘live’ action