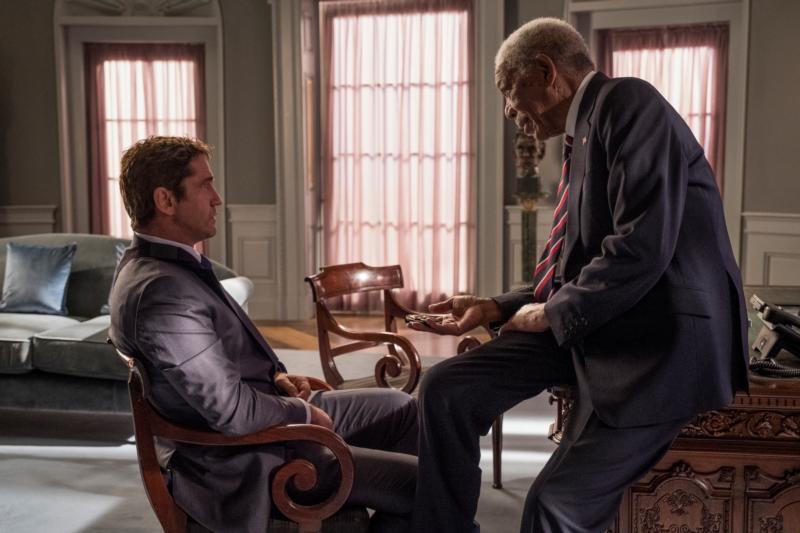 Gerard Butler and Morgan Freeman star in a scene from the movie “Angel Has Fallen.” (CNS photo/Lionsgate)

NEW YORK (CNS) — Good personal values vie with relentless gory combat in “Angel Has Fallen” (Lionsgate). The result is an action sequel that’s too graphic for those seeking casual entertainment.

This third installment in the series focusing on dedicated and highly skilled Secret Service agent Mike Banning (Gerard Butler) opens with him under consideration as a possible successor to the agency’s retiring chief, David Gentry (Lance Reddick).

He’s of two minds about the prospect. Reluctant to become a desk jockey, he’s nonetheless wondering whether the toll previous missions have taken on him, mentally and physically, makes leaving field work a wise decision.

Circumstances change swiftly, however, when an unknown force launches a vast and devastating assassination attempt against President Allan Trumbull (Morgan Freeman) using scores of explosive drones. The attack leaves a slew of Banning’s comrades dead and the chief executive — who had been out of Washington on a fishing expedition at the time — in a coma.

Banning himself wakes up in the hospital to find that he’s the lone survivor among the president’s protectors. He also discovers that he’s been elaborately framed for the assault.

As the vice president (Tim Blake Nelson) takes over and uses evidence of Russian involvement to push for a war that would benefit Wade Jennings (Danny Huston), an old buddy of Banning’s who’s become a private military contractor, and FBI official Helen Thompson (Jada Pinkett Smith) tries to figure out the truth, Banning escapes and goes on the lam to get to the bottom of it all himself.

Director and co-writer Ric Roman Waugh’s addition to the franchise that began with 2013’s “Olympus Has Fallen” portrays marital and family solidarity by way of the response to Banning’s adversity by his loyal wife, Leah (Piper Perabo), and estranged father, Clay (Nick Nolte), with whom he reconnects while on the run. But fidelity and reconciliation take a back seat to an amount of intense, relentless mayhem that may be too much even for many grown-ups.

The tensions in the script Waugh penned with Robert Mark Kamen and Matt Cook are typified by Clay’s character. As hilariously portrayed by Nolte, he’s an old coot of a survivalist who’s long since gone off the grid.

Yet much of the humor surrounding Clay derives from the wildly extensive measures he’s taken to prevent potential enemies from intruding on his remote woodland property — preparations that naturally come in handy once Mike’s adversaries show up there. While no one much mourns bad-guy extras, laughing as they meet their doom feels more than a little incongruous.

NEXT: ‘Blinded by the Light’ shines as a sunny mix of comedy and drama