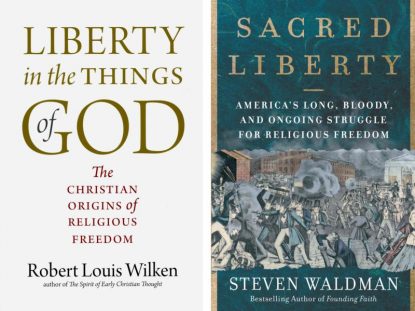 “Religious freedom rests on a simple truth,” writes philosopher and theologian Robert Louis Wilken; “religious faith is an inward disposition of the mind and heart and for that reason cannot be coerced by external force.”

Historian and journalist Steven Waldman would agree, but would quickly add that this “simple truth” has been challenged repeatedly in the United States. The subtitle of his new book says it all — America is engaged in a “long, bloody and ongoing struggle for religious rights.”

That religious liberty is under assault these days is without question. Hardly a month goes by without an attack on a church, synagogue or mosque. Although freedom of worship is generally considered a universal human right, the verdict is hardly unanimous. And it only takes one arsonist or gunman to remind us of the price of that freedom.

It is among the oldest and most precious of our human rights, says Wilken, one of the foremost authorities on the history of Christianity in the United States. And yet, as he shows well in his new book, “Liberty in the Things of God,” preserving that freedom has not been easy.

Waldman adds to the story in a substantive survey titled “Sacred Liberty.” He is the author of “Founding Faith” and one of the founders of Beliefnet, the popular website on religious issues.

The two books work in harmony to tell both the general and specific contours of religious liberty.

Although Wilken’s book is brief, it covers a broad canvas. He traces this religious freedom back to the third century of the Common Era. “It is not part of religion to coerce religious practice,” wrote Tertullian of Carthage, “for it is by choice, not coercion, that we should be led to religion.”

Wilken stresses, however that Tertullian and other early church thinkers had little effect on the course of religious freedom until the latter stages of the Enlightenment. Thanks to the printing press, old ideas gained new traction among defenders of religious rights. The substance of Wilken’s work is to show how religious freedom emerged in the 16th and 17th centuries as filtered through the ideas and writing of early and medieval Christianity.

Wilken also emphasizes that the idea of religious freedom as defined by Enlightenment thinkers did not lead directly to religious toleration. In a very interesting epilogue, he highlights the importance of James Madison in shaping the American concepts of religious liberty.

And Waldman takes this recognition of Madison even further. He notes that “this underappreciated founder devised the ingenious, counterintuitive and often misunderstood blueprint for the religious liberty we enjoy today.” Simply put, Madison’s advice was to leave religion alone. No one denomination should receive preference or persecution by the government.

This is not to imply that Walden is a modern Pollyanna. In 18 well-documented chapters, he shows forthrightly that achieving and maintaining religious freedom in this country has been a battle. And that is his fundamental thesis. “If we want to preserve this great legacy,” he writes, “we should appreciate our unusual achievement and what our ancestors had to sacrifice.” It is Waldman’s hope that the past will continue to inform the present and shape the future.

Wilken and Waldman offer perspective and insight to an ongoing debate that is too often dominated by passion and emotion. They tell us to go back to that simple advice that Madison wrote into American law: Leave religion alone and religious freedom will flourish. These two scholars have much to say if we are willing to listen.

Walch is a historian of American Catholicism and the author of “Parish School” (2015).

NEXT: ‘Angel Has Fallen’ milks bad guys’ deaths for laughs