‘Once Upon a Time’ evokes the good, bad and ugly of Hollywood 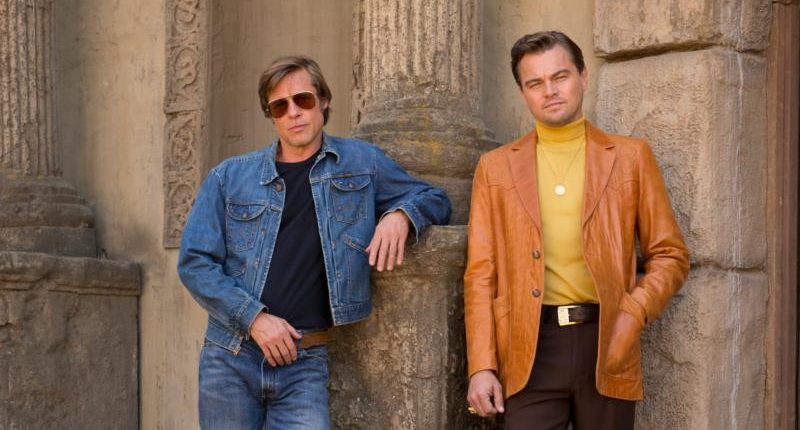 Brad Pitt and Leonardo DiCaprio star in “Once Upon a Time in Hollywood.” (CNS photo/Sony)

NEW YORK (CNS) — Any film linking the names of writer-director Quentin Tarantino and infamous cult leader Charles Manson is unlikely to be a peaceable affair. And this eventually proves true for the auteur’s ruefully affectionate look back at 1969 Tinseltown, “Once Upon a Time in … Hollywood” (Columbia).

With Dalton’s prospects on the wane, Booth is busier as his chauffeur and handyman than doubling for him on screen. Yet their macho, beer-and-a-pizza bromance endures.

Menace underlies Tarantino’s pitch-perfect evocation of the era as both one of Manson’s (Damon Herriman) followers, nicknamed Pussycat (Margaret Qualley), and his group’s most famous future victim, actress Sharon Tate (Margot Robbie), cross paths with the duo. Tate and her husband, director Roman Polanski (Rafal Zawierucha), have recently moved in next door to Dalton.

Booth tangles with Manson’s “family” after giving hitchhiker Pussycat a lift home to the Spahn Ranch, a former movie set for Westerns where he and Dalton both once worked. Pussycat’s version of flirting, it develops during their ride together, includes casually offering to perform an aberrant sex act on Booth.

Al Pacino has a ball as Marvin Schwarzs, a quintessential industry insider who hopes to revive Dalton’s career by helping him get cast in a spaghetti Western. And Tarantino gives tough-guy Booth the chance to tussle with legendary martial artist Bruce Lee (Mike Moh).

Though diffuse and somewhat self-indulgent, the film ultimately achieves a powerful cumulative effect aesthetically. The script’s reflections on friendship, the link between fiction and reality and life as an actor and/or celebrity all resonate. Tarantino’s careful craftsmanship even extends to the title, which both invokes Sergio Leone’s “Once Upon a Time in the West” (1968) and correctly labels the tale he’s telling as a fable.

Yet, in line with other of Tarantino’s recent offerings, the movie wallows, briefly but excessively, in brutal, gruesome violence visited on easy-to-hate victims. It thus appeals to viewers’ worst instincts even as it ostensibly condemns the real-life effects of ecstatically sadistic entertainment.