Book explores ‘a vision of the good’ beyond right-left politics 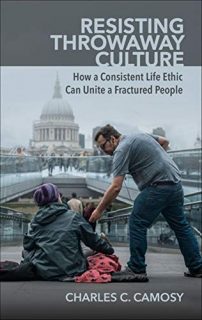 In a time of intense polarization in both church and society, the new book from Fordham theologian Charles Camosy seeks to outline “a revitalized consistent life ethic” that “could demonstrate how to unify a fractured culture around a vision of the good.”

Above all, Camosy’s book seeks to overcome the Catholic battles between pro-life and social justice issues, a dichotomy that too often mirrors the incoherence of our political parties.

In a series of chapters, he seeks to apply a set of consistent principles to address a range of issues that cross partisan lines, vigorously opposing the “throwaway culture” manifested equally in widespread pornography and abortion and in disdain for the poor, immigrants and the planet.

Crucially, Camosy opposes the tendency to pit recent popes against one another, instead showing that the “new lenses” Pope Francis brings in rejecting a “throwaway culture” and encouraging a “culture of encounter” are simply vivid exemplifications of the fundamental principle of the dignity of all persons, without exception.

Camosy’s approach, however, goes beyond Pope Francis’ particular gift of powerful, typically biblical images by developing seven grounding principles. Clear principles, even when subject to some interpretation, provide a bulwark against temptations to tailor arguments to fit our party and our own desires, or to treat different issues in inconsistent ways, he argues.

The principles obviously start with a refusal to reduce or instrumentalize the dignity of anyone. This principle then leads to, on the one hand, principles of resisting the use of violence, claims to autonomy and depersonalizing language, and on the other, principles of embracing those most vulnerable and most on the peripheries. His final principle asserts a mutuality of relationships, even across generations.

The book’s body involves a fast-moving, well-informed set of chapters outlining all the ways our culture needs such a consistent life ethic. Perhaps most admirable is the way Camosy consistently draws our attention to the violence, depersonalization and assertion of autonomy that dominates our culture.

The explosion of pornography, for example, and the rampant destruction of the environment rest on the same ideas as does the presumed right to abortion and to physician-assisted suicide.

Even more piercingly, Camosy shows how such tendencies animate our terrible indifference to realities like the factory farming of the vast majority of our animals and the strategy of mass incarceration for dealing with crime. The pattern in all these practices is the same: depersonalize some segment of creation in order to subject it to violence in the name of preserving and enhancing individual autonomy.

The pervasiveness of the patterns Camosy demonstrates may be sobering and even depressing. However, the book aims at being hopeful since everyone, at every point in the political spectrum, wants to resist this pattern when applied to this or that issue.

Thus, the strategy, especially for the church, should be to lead people to recognize how to be consistent across areas — those who see the throwaway pattern at work in abortion should come to see it in the treatment of immigrants, and vice versa.

But this can only happen, Camosy thinks, if we all do two things. One, mentioned throughout the book, is the necessity of proceeding with intellectual honesty — by which he means being serious about following the principles wherever they lead. (Importantly, Camosy formulates and responds to objections to his positions in every chapter.)

Also, he emphasizes the need to “take a long, hot, cleansing political shower” — including from immersion in our devices — in order to practice regularly, as a spiritual discipline, the priority of what Pope Francis calls the face-to-face encounter with others. Importantly, this encounter must be with those who are most in need and most under threat of marginalization — the people whom we ourselves are most likely to depersonalize and throw away.

Camosy’s book has many virtues, but above all, he combines intellectual rigor, accessibility and huge amounts of information on issues in a way that promises to open up anyone’s perspective to the fullness of Catholic social thought — even to those who are not Catholic, as his principles do not depend on specific religious faith. He does succeed in offering up a consistent vision for addressing so many social problems, one that is not utopian and not easily co-opted by existing partisan power structures.

While he treats issues in great detail, some may fault his work for treating them all equally. For example, some might argue issues of direct killing — abortion or war — must be addressed first, while others might suggest that systemic problems like racism or environmental destruction are so large and pressing, that they require a priority not granted here. But such argument misses the overall point of Camosy’s project: to see, in the words of Pope Francis, that “everything is connected” and we should not tolerate the marginalization and depersonalization of some for the benefit of others.

Thus, arguments that this or that issue is “more important” can, even if unintentionally, send the message that we tolerate the throwing away of other issues.

Camosy insists that our first and most important priority should be a clear and complete recognition of the dignity of all. Once we are unified around that, his book suggests, we will then be so much more able to come up with real solutions to the suffering and death rampant in divided society.

Cloutier is an associate professor of theology at The Catholic University of America in Washington.

PREVIOUS: For gamers, ‘Sea of Solitude’ a beautiful if disturbing play

NEXT: At Washington exhibit, the toll of the immigrant journey becomes art