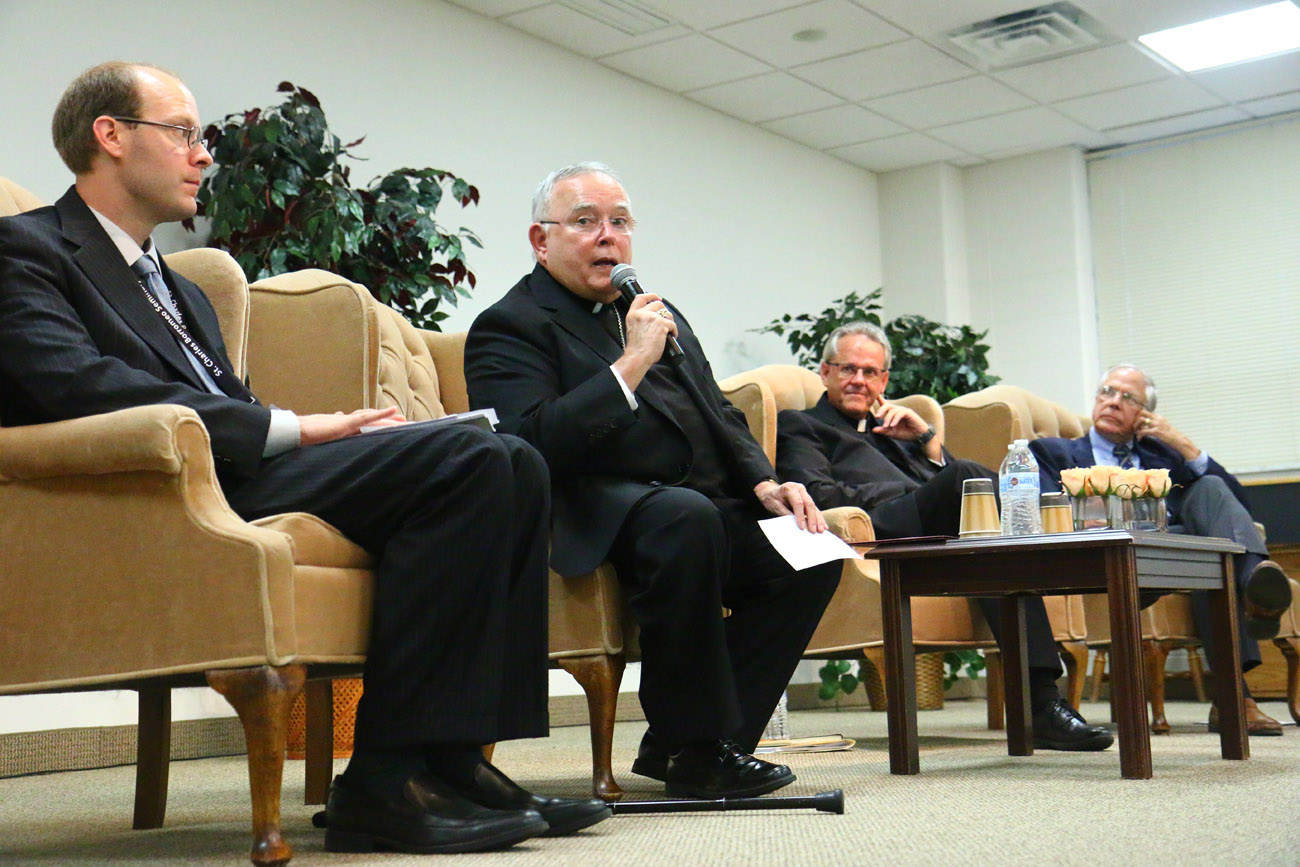 A team of four panelists including Archbishop Charles Chaput shared their vision of tomorrow’s Catholic parishes, and the thinning of Catholic congregations today, at the Cardinal’s Forum Aug. 27 at St. Charles Borromeo Seminary.

Taking turns to discuss the topic “Empty Pews: The Future of Catholic Parishes?” were experts in communications, moral theology and sacred music — representing each of the three endowed chairs at the seminary — in addition to the archbishop.

Their five-minute presentations were followed by lively exchanges among one another and some of the more than 200 participants in the audience of lay people, religious and most of the seminarians.

Archbishop Chaput cut to the heart of the matter with his observation, “My concern about the parish of the future is whether it is even going to exist.”

The structured parish life he grew up with in the Midwest, and especially the neighborhood parishes in the Philadelphia Archdiocese, “may be a thing of the past,” he said. “God will decide that, but we have to be participants. The reason I’m worried is because of church attendance.”

As CatholicPhilly.com documented last week in the first of a series on church life, Mass attendance locally has dropped to 18% of registered parishioners. 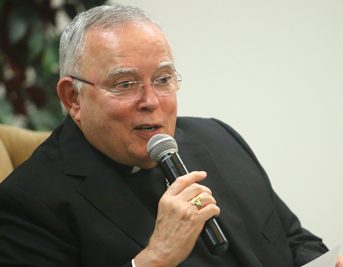 Archbishop Charles J. Chaput makes a point during his presentation at the Cardinal’s forum. (Sarah Webb)

The beliefs of today’s young people, how they will comprise the parish of the future and how today’s seminarians will serve as parish priests were the themes of Archbishop Chaput’s brief talk.

He described the young cohort known as Nones, or those Americans who identify their religious affiliation as None. Fully one-third of young Americans identify as Nones.

While most are not atheists, Nones typically are spiritual not religious, they believe in God, pray more the average person did 10 years ago, and many believe in the Bible too.

“The Nones reflect a new faith rather than the loss of faith altogether,” the archbishop said.

Further, the Nones “believe morality exists but they will decide what it is,” and they view institutions guilty of injustice as “not worthy of your attention,” Archbishop Chaput said, referring to the church’s sexual abuse crisis in recent years and other failings in the past.

The people who would become parishioners in future decades will arise from this cultural landscape.

“I don’t think we can form communities or parishes in the future unless we find a way of speaking into the minds and hearts of the young people who look at the reality of religion with the kind of perspective that I’ve been describing,” Archbishop Chaput said.

Panelist Nathan Knutson, the Lucille M. Francesco Chair in Sacred Music at the seminary and its director of sacred music, suggested the parish of the future should focus on high-quality music that has three necessary traits: it should be holy and “set aside” for God; it should be true art that is “not haphazard but proven” and it should be universal, able to be sung “in any country and by any people,” he said.

While those qualities of liturgical music “are the way to the future,” as a practical matter Knutson encouraged more people to make a difference by joining their parish choir.

“You can’t just sit in a pew and expect the music to get better,” he said. “If you have a complaint about it, join it, help it. Give your talents that God gave you.”

Good music is important to the liturgy, but nothing is more important to the parish than the celebration of the liturgy done well, suggested Oblate Father Thomas Dailey, who holds the John Cardinal Foley Chair of Social Communications and Homiletics.

“In the Catholic parish of the future, worship should be our work, perhaps the only work, certainly the primary work,” he said in his talk. “Other programs and activities abound and much good is done, but worship remains the unique and distinctive business of the parish.” 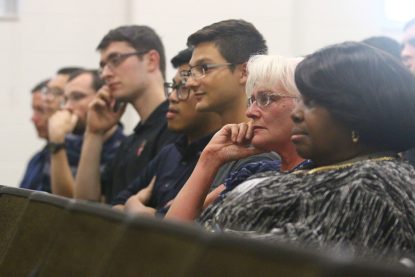 Seminarians and guests at St. Charles Borromeo Seminary ponder a point during the Cardinals Forum Aug. 27 on the theme “Empty Pews: The Future of Catholic Parishes?” (Sarah Webb)

Surveys of Catholic parishioners nationwide indicate this imperative, according to Father Dailey.

The Catholic research organization CARA (Center for Applied Research in the Apostolate, at Georgetown University) reported the top two traits that attract parishioners to their parish, the elements that they rate as excellent and where a parish’s priorities should lie are its “sense of community, in terms of a welcoming spirit and sense of belonging,” and its worship and celebration of sacraments, “in terms of the quality of the liturgy and the preaching,” he said. “The pattern is loud and clear.”

Father Dailey suggested these stated priorities of Catholic parishioners should have implications on the parish budget to fund for worship adequately, to hire full-time or part-time staff personnel in favor of volunteers, and to maintain beautiful and effective facilities.

Parishes should consider “elimination of secondary activities so as to dedicate human, financial and material resources to the primary purpose of worship,” and use technology to provide the experience of worship done well “to the greatest number of people,” he said.

Dovetailing on the theme of community life in a parish, John Haas, the seminary’s John Cardinal Krol Chair of Moral Theology, raised what he said should be the end goal or purpose of parish life, which is to “help as many people as possible obtain heaven by bringing them to the person of Jesus Christ,” he said.

While stressing the need for priests to preach doctrine in their homilies and for quality liturgical music as keys to revitalizing parish life, Haas acknowledged the phenomenon of Catholics leaving their home parish to attend Mass among certain “ecclesial movements,” among them the celebration of the Mass in the extraordinary form, in Latin.

“But nothing can substitute for the local parish,” Haas said, “which gathers neighbors around the altar of sacrifice. The local parish can stand as a witness in the midst of the neighborhood with its bells calling the faithful to prayer and pointing out realities beyond local concerns and the trials of individual lives. Nothing can replace such local communities of love and support and of a mutual shared love of Jesus Christ in the Blessed Sacrament.”

Archbishop Chaput agreed with his fellow panelists in not trying to present all the answers in one session. “I have questions (and) deep concerns, but I also have confidence in you,” he said.

Addressing the seminarians present, the archbishop told them, “you are going to help determine what the parish of the future is going to look like.”

“And I beg you,” he said, “please do not decide that it’s going to look like the parish you grew up in, because I don’t think that is going to work. You shouldn’t see yourself as being prepared for the kind of parish that you want. You have to be prepared for the kind of parish that’s necessary,” in which priests can minister “in a loving and full way.”

Some of the more than 200 guests at the Cardinal’s Forum line up to pose a question or comment to the panelists. (Sarah Webb)

PREVIOUS: Half of Catholics attending Mass 28 years ago no longer do, figures show

NEXT: A few thoughts on Sunday Mass attendance