‘By the Grace of God’ explores clerical abuse with honesty, intelligence 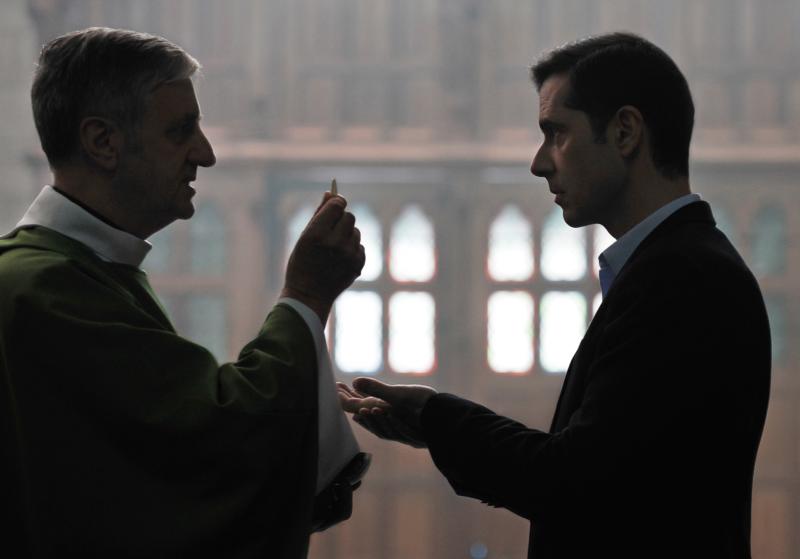 Melvil Poupaud, right, stars in a scene from the movie “By the Grace of God.” (CNS photo/courtesy Music Box Films)

NEW YORK (CNS) — In 2015, director and co-writer Tom McCarthy’s fact-based film “Spotlight” followed the landmark investigation by reporters from the Boston Globe into the extent of priestly sexual abuse in their home city.

In the hard-hitting drama “By the Grace of God” (Music Box), similarly founded on real events, the scene shifts to Lyon, France, and the focus is on a group of survivors rather than journalists.

Decades after being molested by Father Bernard Preynat (Bernard Verley), his now-grown victims band together to bring him to justice. They also seek to compel the current archbishop of that city, Cardinal Philippe Barbarin (Francois Marthouret), to reveal what he knew about Preynat’s evil deeds and when.

The effort is initiated by Alexandre Guerin (Melvil Poupaud), a low-key businessman who still practices the faith and whose five children attend a Catholic school. He trusts the church in general and takes it for granted that Cardinal Barbarin wants to end the plague of abuse.

The next important figure in the story, Francois Debord (Denis Menochet), has a very different outlook. A combative atheist, he wants to take radical action to force the church to reform. He’s suspicious both of the institution and its leaders.

Emmanuel (Swann Arlaud), who rounds out the trio of main characters, lacks both Alexandre’s stability and Francois’ drive. An emotionally ravaged lost soul, he has a volatile relationship with his live-in girlfriend, Jennifer (Amelie Daure). Their quarrels sometimes turn into semi-violent shoving matches.

This diverse triad forms the leadership of a movement called La Parole Liberee (Lift the Burden of Silence). Around them, writer-director Francois Ozon builds an ensemble of other figures and uses it to give viewers a sense of the impact one serial predator can have — and of the varied reactions to trauma that may result from his crimes.

Though this crowded canvas sometimes makes “By the Grace of God” seem slightly diffuse, its understated tone and comfort with ambiguity only increase its ultimate emotional impact. Overall, Ozon’s approach succeeds, and the result is a subtly crafted piece of cinema that Catholic moviegoers will naturally find painfully challenging but which they will come away from with respect.

The film contains mature themes, including the sexual abuse of children, drug use, cohabitation, upper and rear nudity, an obscured image of full nudity, at least one use of profanity and considerable rough and crude language. The Catholic News Service classification is L — limited adult audience, films whose problematic content many adults would find troubling. Not rated by the Motion Picture Association of America.

NEXT: Bio shows religious influences on life, work of FDR