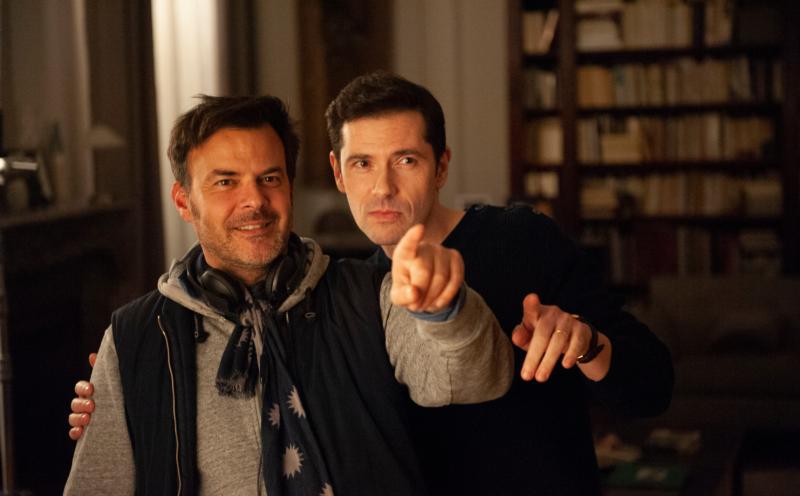 Writer and director François Ozon and actor Melvil Poupaud are seen on the set of the movie “By the Grace of God.” Viewers of the new French-language film detailing a true-to-life French clerical sex abuse scandal may be struck by similarities to the U.S. drama “Spotlight,” which dealt with the abuse scandal that erupted in Boston in 2002. (CNS photo/courtesy Music Box Films)

WASHINGTON (CNS) — Anybody who sees “By the Grace of God,” a new French-language film that details a true-to-life French clerical sex abuse scandal, may be struck by similarities to the U.S. drama “Spotlight,” which dealt with the abuse scandal that erupted in Boston in 2002.

He added, “When I met the victims, I was very touched. And they all talked to me about ‘Spotlight.’ It was, of course, a big success. I understood, they trusted me, and they told me their story. In a certain way, they wanted me to do the French ‘Spotlight,’ because they knew ‘Spotlight’ won an Oscar (Best Picture and Best Original Screenplay) and was a big movie in America. And they were right.”

Ozon made his remarks in an Oct. 8 phone interview with Catholic News Service from Paris, where he lives. Although he answered in English, CNS’ questions to him were relayed to him in French by an interpreter.

“By the Grace of God,” which opens Oct. 18 in select U.S. theaters, details the still-emerging scandal in the Archdiocese of Lyon, France. A priest of the diocese, Bernard Preynat, had been head of large Catholic Scout group at a Lyon parish in the 1970s and ’80s, and had abused many boys in his care.

The film depicts three survivors — all now fully grown — who come to terms with the toll taken from the abuse and ask Cardinal Philippe Barbarin, then Lyon’s archbishop, to remove Preynat from ministry.

When the cardinal does nothing, the men mount a public campaign to expose Preynat and force the cardinal’s hand. He suspended the priest in 2015. A year later, Preynat was charged with abuse and rape; CNS reported this June he is still awaiting trial.

Ozon, who in America may be best known for the 2002 French film musical “Eight Women,” said he had made many films with strong women as main characters, but ” I wanted to make a film about male fragility, to make a film to evoke expressions by the men. In cinema, men are all action, and only women are feeling. Men can cry, too. I was looking for a subject, I looked at what happened in Lyon, and I decided to tell the story at this moment.”

While the focus is on the three men, one out-of-nowhere plot twist comes when the wife of one of the survivors tells another survivor that she, too, had been abused as a child.

“I was very surprised, too,” Ozon said. “When I interviewed the wife of Alexandre, I asked her how she supported him for such a long time.” Her response: “I have to tell you a secret. I was abused myself as a child, but you have to tell (keep) it a secret.” “Can I use it for the film?” “OK, but don’t tell exactly the truth. Don’t say it was family. Say it was a friend.”

Another real-life woman who figures prominently in “By the Grace of God” is Regine-Maire, who works for Cardinal Barbarin. “In her job, she tries to organize the confrontation between the priest and the victim. I don’t know who is this woman. In a tradition of supporting the victims in a certain way. I think she tries to do her best, but it’s very French; people, each one, has their own opinion of this woman.” Ozon said. “Does she try to protect the victims or does she try to protect the church? I don’t know the answer.”

He added, “She was not happy with the film” and her portrayal as a “bad girl,” noting she asked him to change the character’s name. He did not.

Regine-Maire might have been in the minority in her own country. “By the Grace of God” was “very successful in France. There were 1 million admissions, which is huge for this kind of movie. Many people, especially from the Catholic places, were going to be afraid of the film” because of the subject matter, Ozon said, but “they thought the film was very respectful with reality.”

He added, “Many Catholics came to watch the film. … Many of them are upset about all the story of Preynat in the church. They want to turn the page.”

A Lyon archdiocesan tribunal defrocked Preyant this summer. A French court convicted Cardinal Barbarin of covering up abuse by a priest, giving him a six-month suspended sentence in March. Cardinal Barbarin is appealing the conviction. Pope Francis refused to accept his resignation, but appointed an apostolic administrator in June to govern the archdiocese.