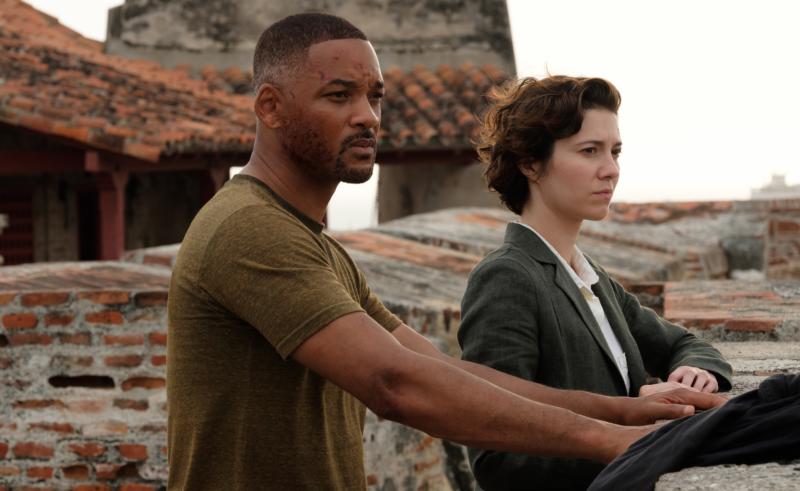 Will Smith and Mary Elizabeth Winstead star in a scene from the movie “Gemini Man.” (CNS photo/Paramount)

NEW YORK (CNS) — Though it may be named after a heavenly constellation, the sci-fi action-thriller “Gemini Man” (Paramount) turns out to be less than stellar.

Tedious in its storytelling, as penned by David Benioff, Billy Ray and Darren Lemke, the film also suffers from a dodgy ethical outlook that calls for careful assessment on the part of grown moviegoers.

On the surface, all is agreeable enough as director Ang Lee marshals cutting-edge special effects and pleasant visuals, especially as his globetrotting characters’ itinerary takes in scenic views of Budapest amounting to a free ad for Hungarian tourism. But the depths of this tale about highly gifted secret-ops sharpshooter Henry Brogan (Will Smith) are murky.

This becomes apparent in the opening sequence during which Henry, aiming from a considerable distance, manages to take out a target who’s traveling on a speedy European train. Henry almost doesn’t take the shot for fear of injuring a nearby little girl. But the whole idea of a sympathetic assassin who only kills bad guys is obviously questionable.

Henry’s work has exacted its toll, however, and he’s decided to retire.

Before he can take to his rocking chair, though, Henry discovers that his last mark wasn’t a villain at all but an American ally whose work on the Gemini Project Henry’s superiors — principally ruthless bureaucrat Clay Verris (Clive Owen) — want to keep secret at any cost. That includes treating Henry himself, once the higher-ups have figured out what he knows, with extreme prejudice.

So Henry goes on the lam, accompanied by Danny Zakarewski (Mary Elizabeth Winstead), a fellow agent who was originally dispatched to surveil him but has instead become his ally. The fugitives are aided by Baron (Benedict Wong), a buddy of Henry’s from their days in the Marines when their commander was — you guessed it — Clay.

After defeating a number of outclassed pursuers, Henry winds up being chased by a younger, equally talented clone of himself called Junior (also Smith, digitally regressed to his “Fresh Prince of Bel-Air” days). Concocted by Clay, who has since served as his adoptive father, Junior has been raised to believe he was abandoned, as an infant, by his parent. Henry’s fate depends on convincing Junior of the truth about his origins and flipping his loyalty.

Seen-it-all-before motifs and cliches in the dialogue make Henry’s adventure seem thoroughly familiar. While the mayhem in which he engages is kept almost bloodless, moreover, the screenplay’s consistent message about the need to resist negative impulses is completely undermined in the climax. Accordingly, this is not a movie for the easily misguided.

The film contains confused values requiring mature discernment, an incidental but benignly viewed adulterous situation, much stylized but sometimes harsh violence with little gore, about a half-dozen uses of profanity and at least one rough and numerous crude and crass terms. The Catholic News Service classification is L — limited adult audience, films whose problematic content many adults would find troubling. The Motion Picture Association of America rating is PG-13 — parents strongly cautioned. Some material may be inappropriate for children under 13.

NEXT: ‘Unbelievable’ traces rape survivor’s path from disbelief to justice