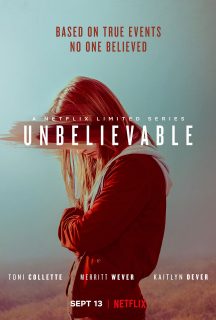 NEW YORK (CNS) — Journalist and author Katie Couric is among the executive producers of Netflix’s new limited-series drama “Unbelievable.” The source of considerable online buzz, the show — which is currently streaming in eight one-hour episodes — is as good as advertised: engaging, thoughtful and smart.

It is, however, suitable for grown viewers only.

Based on a 2015 Pulitzer Prize-winning report from nonprofit investigative journalist organizations Pro Publica and the Marshall Project, the drama was created by veteran screenwriter Susannah Grant (“Party of Five”) and novelists Ayelet Waldman and Michael Chabon.

It begins in Lynwood, Washington, in 2008, in the immediate wake of an apparent sexual assault on 18-year-old Marie Adler (Kaitlyn Dever). The setting is the Oakdale Apartments, a facility for at-risk youth. Marie, like her peers, is transitioning from foster care to life on her own within this supportive community.

As Marie awaits the police, she’s comforted by Becca (Patricia Fa’asua), a counselor, and by her former foster mother, Judith (Elizabeth Marvel). After the preliminary investigation, Marie also reaches out to another previous foster parent, Colleen Doggett (Bridget Everett). Judith and Colleen compare notes about Marie, and begin to doubt her story.

“This,” as Pruitt says flatly to the complainant, “is a waste of our time.” Not only is Marie’s case dismissed, the city fines her for filing a false police report.

“Unbelievable” then jumps forward to 2011 Golden, Colorado, where detective Karen Duvall (Merritt Wever) examines another sexual assault at an apartment complex. Soft-spoken, contemplative and empathetic, she’s a different kind of criminal investigator from her male counterparts in Lynwood.

Karen, for instance, accompanies the survivor, Amber Stevenson (Danielle Macdonald), to the hospital for her physical examination.

Similarities in a case in nearby Westminster lead Karen to another female detective, the more seasoned Grace Rasmussen (Toni Collette). Suspicious of outsider Karen’s theories and resentful of her intrusion, Grace initially resists sharing resources with the younger officer.

As the evidence mounts, however, Grace agrees that forming a task force with the FBI to catch the serial rapist will be the best means of ensuring justice.

As the Colorado investigators close in on their man, “Unbelievable” doesn’t lose sight of Marie. Having become a pariah, she has lost both her home and her job.

Yet, to her delighted surprise, Marie eventually gains some vindication, justice and redemption, thanks to the help of psychologist Dara Kaplan (Brooke Smith), attorney Bruce Bronstein (Tom Amandes), and the two resolute women cops.

The sexual crimes integral to the story are presented candidly but not luridly. Some strong language is peppered into the scripts, but it doesn’t feel unnecessary. By contrast, an instance of full nudity — not the only glimpse of flesh we’re given — could easily have been excised without loss.

On the whole, though, this is an admirably restrained production — especially considering how easily its gritty subject matter could have been used sensationally or exploitatively. Adults prepared to come to grips with challenging material will thus find much to commend in “Unbelievable.”

Religious viewers will especially appreciate how sympathetically the program depicts people of faith, most prominently Karen. Her deep beliefs are best reflected by a comment she makes to Grace during a stakeout: “The stuff we see is hard enough with God. I don’t know how anyone does it without.”

Such moments reveal the deep rapport between Wever and Collette, which is one of the program’s outstanding aesthetic assets. Overcoming their temperamental differences, emotionally visceral Grace and the more equanimous Karen unite in their advocacy for assault survivors.

But “Unbelievable” is ultimately Marie’s story, and Dever — best known as Tim Allen’s flippant youngest daughter, Eve, in “Last Man Standing” — is marvelous to watch. She subtly transfigures from a girl, who always believed you should “take what you can get, and be glad it isn’t worse,” into a woman who confidently says, “I wake up now, and I can imagine good things happening.”

As a character-based drama, as a crime procedural and as social commentary, “Unbelievable” succeeds wonderfully.

NEXT: Still creepy and kooky, but ‘The Addams Family’ isn’t very funny