‘A Beautiful Day in the Neighborhood’ makes viewers feel at home 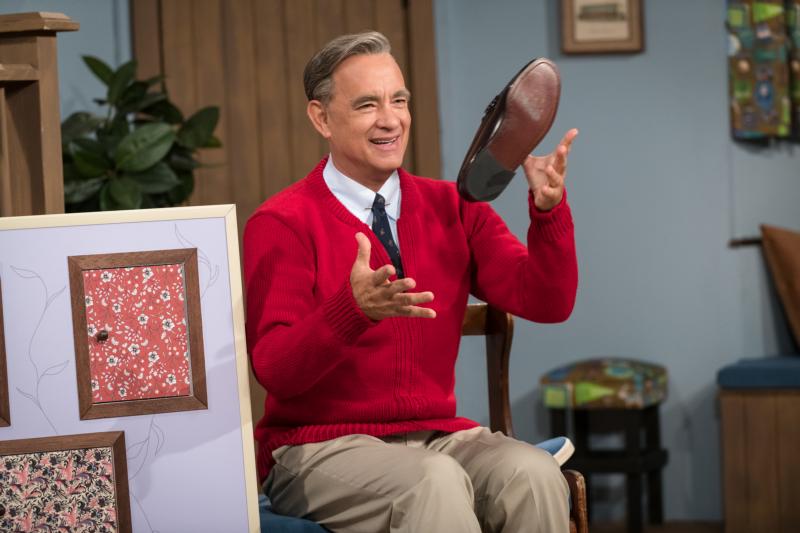 Tom Hanks stars in a scene from the movie “A Beautiful Day in the Neighborhood.” (CNS photo/Sony)

With the advent of the fact-based dramatization “A Beautiful Day in the Neighborhood” (Sony), lightning, it would seem, has struck twice.

Assigned, much against his will, to profile Rogers (Tom Hanks) for an edition of Esquire magazine devoted to heroes, troubled, cynical reporter Lloyd Vogel (Matthew Rhys) sets out to tarnish his subject’s halo. Instead, he finds his life transformed by the friendship into which his gentle, wise and unflappable new acquaintance gradually draws him.

In particular, Rogers helps to alter Lloyd’s embittered attitude toward his estranged father, Jerry (Chris Cooper). Though Jerry has reached out in hopes of a reconciliation, Lloyd initially remains resolute in his refusal to forget his dad’s past transgressions, especially his abandonment of the family at a moment of crisis during which he was too busy womanizing to live up to his responsibilities.

Visually, Heller makes her own the interplay between reality and imagination that was a trademark of “Mr. Rogers’ Neighborhood” throughout its long run from 1968 to 2001. A dream sequence even finds a miniaturized Lloyd dwelling temporarily in the Neighborhood of Make-Believe, the realm, as many will recall, of King Friday XIII.

The movie is at its best when the mesmerizing Hanks is on screen. But the treatment of topics like forgiveness, the need to prioritize family life over professional advancement and the power of prayer (Rogers was a Presbyterian minister) are consistently handled with skill.

What emerges is the portrait of a man whose childlike delicacy and vulnerability were precisely his sources of strength — and the products of relentless discipline and hard work.

Although the script, by Micah Fitzerman-Blue and Noah Harpster, doesn’t mention the fact, Rogers had a close friendship with Benedictine Archabbot Douglas Nowicki, the leader of a monastery in Rogers’ hometown of Latrobe, Pennsylvania. That Rogers, with his high moral and spiritual aims, should have been drawn to the monastic life of Archabbot Nowicki’s community, St. Vincent Archabbey, hardly seems accidental.

While Lloyd’s struggles are too dark for little kids, teens and grown-ups will profit from this explicitly humane, implicitly religious movie. The spell Rogers cast, which could even inspire a subway car full of hard-bitten New Yorkers to join a group of schoolchildren in honoring him by joyously singing his program’s theme song, continues to exercise its magic from beyond the grave.

The film contains mature themes, including adultery, a fistfight, one mild oath and a single crass term. The Catholic News Service classification is A-II — adults and adolescents. The Motion Picture Association of America rating is PG — parental guidance suggested. Some material may not be suitable for children.

PREVIOUS: Changeover in online search protocol could foretell a bumpy road ahead