At year’s end ‘Knives Out’ among year’s best films 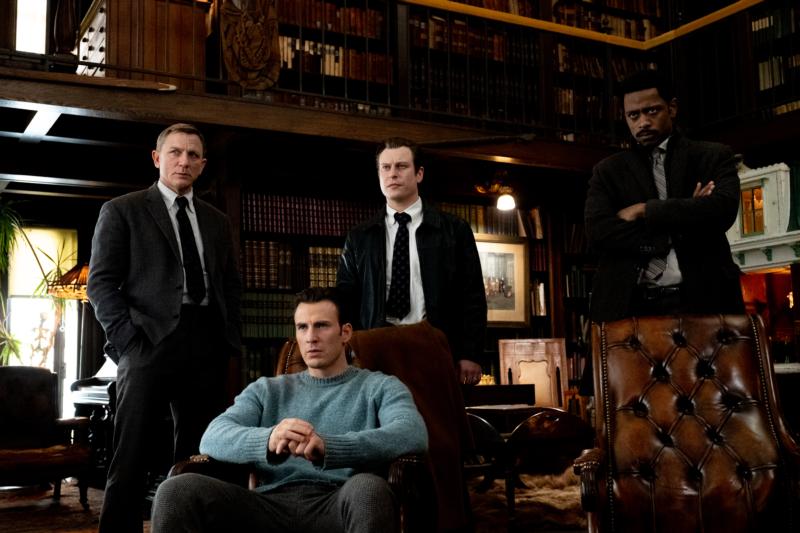 Daniel Craig, Chris Evans, Noah Segan and LaKeith Stanfield star in a scene from the movie “Knives Out.” (CNS photo/Lionsgate)

NEW YORK (CNS) — As the days of 2019 dwindle down to a precious few, we’re unlikely to see the year produce a more richly entertaining film than the splendid comic whodunit “Knives Out” (Lionsgate).

Though writer-director Rian Johnson’s ensemble homage to Agatha Christie — and the big-screen adaptations of her work — is strictly for grown-ups, it provides a brainy and satisfying movie.

The case at hand concerns the death, in the wake of a family party on the night of his 85th birthday, of famous and wealthy crime novelist Harlan Thrombey (Christopher Plummer).

The police officers assigned to investigate, Lt. Elliott (LaKeith Stanfield) and Trooper Wagner (Noah Segan), insist Harlan killed himself. But shrewd Southern detective Benoit Blanc (Daniel Craig), who has been hired by an anonymous client, has other ideas.

Benoit, whose Francophone — presumably Cajun — background is a tip of the hat to Christie’s famous Belgian sleuth Hercule Poirot, seeks answers among the eccentric members of Harlan’s conflict-ridden clan. And, unsurprisingly, it turns out that virtually every one of them (played, among others, by Chris Evans, Jamie Lee Curtis, Michael Shannon, Don Johnson and Toni Collette) had a reason for wanting the old man dead.

As he tries to navigate his way through this morass of competing motives, Benoit enlist the help of Harlan’s caring and sensible Latina nurse, Marta (Ana de Armas). Marta makes an excellent witness and guide to events because she has an unusual medical condition: she cannot tell a lie without getting sick to her stomach. Yet even Marta’s role in the mystery is not what it initially appears.

Clever twists and turns, worthy of Christie herself, abundant humor and sly social commentary make Johnson’s movie a dandy treat. There is a hard edge to the proceedings, though, since so many of the figures on screen are grasping, entitled, selfish and perpetually quarrelsome.

Those qualities are, of course, being satirized. Yet at least some viewers may not care for the company of such ethically impoverished characters. There is also at least one important aspect of the story requiring mature discernment — another good reason, along with thematic and vocabulary considerations, to steer kids elsewhere.

Still, in the end, good triumphs over evil and Johnson handles this final development just as deftly as he treats the rest of his material. As a result, there’s a particular relish to the wrap-up. Call it the sweetly moral cherry atop the flavorful cinematic sundae that is “Knives Out.”

The film contains brief gory violence, a morally complex situation, drug use, sexual references, about a dozen profanities, a few milder oaths, a couple of rough terms, frequent crude and crass language and an obscene gesture. The Catholic News Service classification is A-III — adults. The Motion Picture Association of America rating is PG-13 — parents strongly cautioned. Some material may be inappropriate for children under 13.

NEXT: Christmas movie tells story of orphans helped by angels