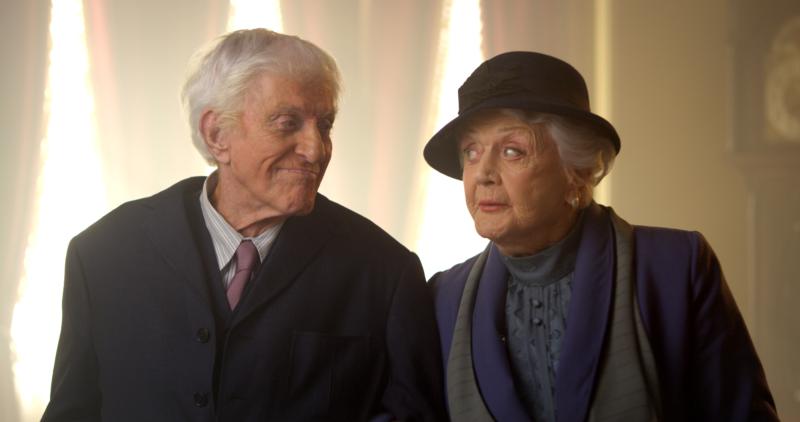 Dick Van Dyke and Angela Lansbury star as guardian angels in “Buttons: A Christmas Tale.” The 2018 musical film is being released on DVD Dec. 3, 2019, just in time for the holidays. (CNS photo/Paramount Home Entertainment)

SAN DIEGO (CNS) — When it debuted in late 2018, “Buttons: A Christmas Tale” boasted an impressive number of famous names and familiar faces, and it was shown in select theaters only Dec. 8, 2018.

Fortunately for the many who missed their one chance to see it last year, the film is being released on DVD Dec. 3, just in time for the holidays. It was released on digital platforms Nov. 19.

The musical film tells the interconnected stories of two orphans who overcome heartbreak and adversity at Christmas time, thanks to the watchful care and timely help of a pair of guardian angels, played by Hollywood legends Dick Van Dyke and Angela Lansbury.

If that weren’t enough, Academy Award-winners Robert Redford and Kate Winslet are the film’s narrators.

American composer Tim Janis, who co-wrote, composed the music for and made his directorial debut with “Buttons,” said the film is a reminder “that you’re not alone and that you should have hope.”

During a Nov. 25 telephone interview with The Southern Cross, San Diego’s diocesan newspaper, Janis said that in addition to the celestial beings depicted onscreen, he “cannot say that there weren’t angels helping and supporting” his efforts to make the film and to bring it to audiences.

It was his first film and, not only was it blessed with a cast that many veteran filmmakers would envy, but after being shown in theaters for one night only through Fathom Events, it secured a DVD release through Paramount Home Entertainment.

All of this, he said, is “like a miracle in itself.”

An admitted fan of the many classic Christmas films that have become perennial favorites, Janis said those movies were a source of inspiration for him. He acknowledged that his own contribution to the genre bears some similarity to Frank Capra’s “It’s a Wonderful Life,” another Christmas film concerned with prayer, heavenly help and the triumph of hope over despair.

In Janis’ film, “Buttons” in the title is the nickname of one of the orphans helped by the guardian angels. Forced to work in a mill but too small to work the machines, the girl instead sews on buttons.

What makes Van Dyke and Lansbury so well-suited for the role of guardian angels?

For Janis, it has something to do with the fact that the two nonagenarian actors are “so much a part of our youth” thanks to their lengthy filmographies. And, in such beloved films as “Mary Poppins” (starring Van Dyke) and “Bedknobs and Broomsticks” (with Lansbury), he said, they project “such a warm, caring presence.”

“You just almost instinctively want to think of them as your guardian angels, if they could be,” he said.

As one who has enjoyed watching Van Dyke sing and dance on film over the years, Janis said he made sure to give the veteran performer a few more opportunities to demonstrate those talents in “Buttons.”

The film’s one-day theatrical run last year represented such “a small window of time,” Janis said, that even some of his own family members were concerned about whether they would be able to see it in theaters.

Of the film’s debut on digital platforms and DVD, he said he considers this “the movie’s real release.”

“I’m glad that people now can have it in their home, and they can purchase it and watch it,” he said. “I think it’ll be able to reach more people, which I really want it to do.”

Among its potential viewers, he hopes, will be those in particular need of having their spirits lifted and hearts touched at Christmas.

PREVIOUS: At year’s end ‘Knives Out’ among year’s best films

NEXT: ‘Love and Mercy: Faustina’ explores history of a popular devotion