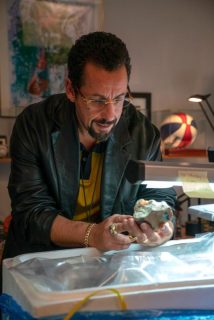 Adam Sandler stars in a scene from the movie “Uncut Gems.” (CNS photo/A24)

NEW YORK (CNS) — You’d have to be meshuggeneh to want to spend two hours-plus in the company of the lowlifes who populate the relentlessly grating character study “Uncut Gems” (A24).

Although the film’s abrasive tone is deliberate, the effect is that of a skillfully composed sonata for fingernails on a blackboard.

Additionally, directors and brothers Josh and Benny Safdie, who co-wrote the script with Ronald Bronstein, hold out the extramarital affair their protagonist is carrying on as a potential source of happiness.

Taken together with the other forms of sexual waywardness depicted or suggested, this winking at unfaithfulness leaves their movie as morally bankrupt as it is aesthetically unpleasant.

Adam Sandler plays world-class noodge Howard Ratner, a jewelry merchant in New York’s Diamond District. Petty-minded, grasping Howard is caught up in a web of varied troubles, all of them of his own making.

Thus he spends his time juggling his wife, Dinah (Idina Menzel), whose exasperation with him is easy to understand, Julia (Julia Fox), the employee who doubles as his mistress, and the basketball gambling addiction that has left him in debt to his loan shark brother-in-law, Arno (Eric Bogosian). Howard’s fraught relationship with hoops star Kevin Garnett (playing himself) is another complicating factor.

Presumably the audience is meant to sympathize with Howard. But given that he whines when he isn’t shouting and kvetches when he isn’t telling boldfaced lies, that’s a tall order. Nor does it help matters that neither Howard nor anyone else on screen seems to be able to complete a sentence without the inclusion of the F-word.

Perhaps the best way to sum up “Uncut Gems” is to observe that it starts with Howard getting a colonoscopy — and goes downhill from there.

NEXT: Problematic ‘The Two Popes’ gets its history wrong