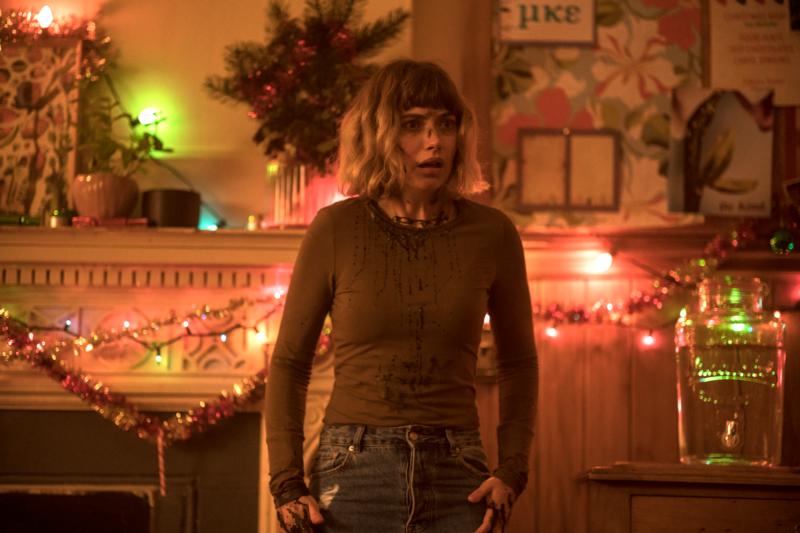 Imogen Poots stars in a scene from the movie in “Black Christmas.” (CNS photo/Universal)

The real agenda of director and co-writer (with April Wolfe) Sophia Takal’s film is not so much to chill viewers, though, as to convey what turns out to be a preposterously overblown feminist message, the bottom line of which is that the only good white male is a dead one.

Along the way to that conclusion, we get a familiar genre set-up in which women are preyed on by mysterious strangers. Here, it’s established early on that the hooded assailants have something to do with Delta Kappa Omega, the fraternity to which the eponymous founder of fictional Hawthorne College once belonged.

The principal potential victim from whose point of view we observe the events of the story, Riley Stone (Imogen Poots), has had a previous run-in with wrongdoing at DKO. Its president, now graduated, slipped her a sedative and tried to rape her.

However, this being — as James Brown long ago informed us all — a man’s world, no one outside of Riley’s circle of sorority sisters (Lily Donoghue, Aleyse Shannon and Brittany O’Grady) would believe her.

As with references to the removal of Hawthorne’s statue from the center of the campus following his outing as a slave owner, the script’s attempts to be “woke” about such a serious real-life issue as date rape come off as awkward and feeble. The same can be said of its portrayal of controversies over the Western canon via the presence of hidebound, traditional curriculum-loving Professor Gelson (Cary Elwes).

In order to avoid a universal condemnation of men — needless to say, Professor Gelson is in cahoots with the DKO lads — Takal and Wolfe introduce well-meaning African American student Landon (Caleb Eberhardt) into the mix as Riley’s shy would-be boyfriend. While he may be a credit to his gender, he is also, in the universe of “Black Christmas,” its solitary boast.

The mayhem is mostly kept under wraps, but frights are few and some of the plot elements incoherent. Does the black goo oozing from the bust of Hawthorne, which now resides in the DKO house, really impart supernatural powers to those anointed by it? If so, of what, if anything, is this substance meant to be symbolic? Privilege underwritten by ill-gotten gains from the petroleum industry, perhaps?

One last off-key element in the movie may irk Christian viewers who are bothering to pay attention: As the pledges of DKO are smeared with the aforesaid sludge, the accompanying formula — “the power of the founder compels you” — is, of course, a mangling of Scripture.

The film contains much stylized violence with some gore, a scene of nonmarital sensuality, a few sexual jokes, at least one profanity, a single rough term, and occasional crude and crass language. The Catholic News Service classification is A-III — adults. The Motion Picture Association of America rating is PG-13 — parents strongly cautioned. Some material may be inappropriate for children under 13.