Film examines whether papal message could have saved Europe’s Jews 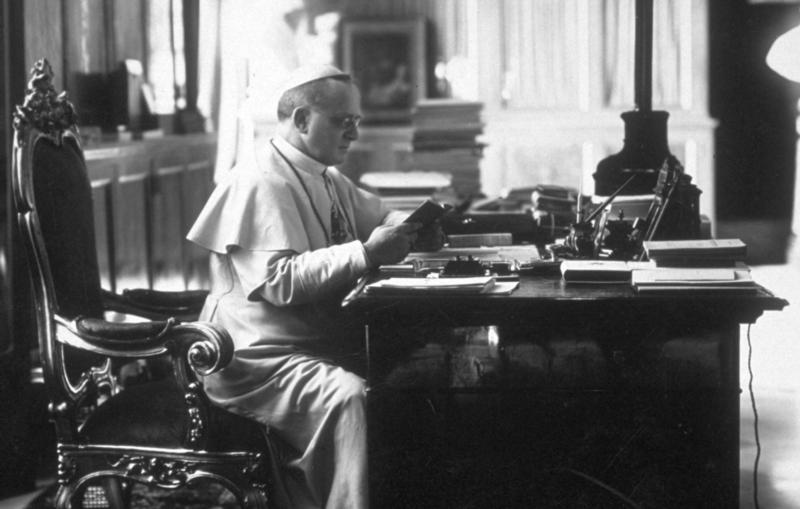 Pope Pius XI is seen in a publicity still from the documentary “Holy Silence.” The film examines whether Jewish lives would have been saved had Pope Pius XI or his successor, Pope Pius XII, issued a statement urging the protection of Jews in Axis-held Europe. (CNS photo/PerlePress Productions)

WASHINGTON (CNS) — One great unanswerable question regarding the Catholic Church and the Holocaust is whether Jewish lives would have been saved had Pope Pius XI or his successor, Pope Pius XII, issued a statement urging the protection of Jews in Axis-held Europe.

Many Jews believe it would have helped, and some scholars point to the number of letters written by Jews to Pope Pius XI or Pope XII asking for their help. Other scholars doubt that anything anyone might have said would have stopped Adolf Hitler from carrying out his systematic elimination of Jews throughout Europe.

It was a key point raised during a Dec. 5 Holocaust documentary and panel discussion at the U.S. Holocaust Memorial Museum in Washington. Both were part of a program called “Reconsidering the Catholic Church and the Holocaust.”

Pope Pius XI was sickly, with a heart condition, but he grew alarmed over the treatment of Jews in Germany. He even went around his secretary of state, Cardinal Eugenio Pacelli, to enlist a U.S. Jesuit priest, Father John LaFarge, to draft an encyclical to declare that Jews were entitled to the same rights and protections as others.

Before writing, Father LaFarge — whose anti-racism work in the United States had gotten Pope Pius XI’s attention — visited Nazi Germany, according to historian Peter Eisner during the post-film panel discussion. “The priest asked himself, ‘Can I believe these newspapers? Are they telling the truth? Or is it fake news?'” Eisner said. Convinced the accounts were true, he went to work on the draft.

The draft was not perfect, the documentary said, and it was nearly scuttled by the Jesuits’ superior general — who the film said was “virulently anti-Semitic” — and who offered to deliver Father LaForge’s draft personally to Pope Pius XI — and apparently took his sweet time doing so. The draft did not see the light of day before the pope died in 1938; it only resurfaced in 1979.

In the conclave to choose a new pope, Cardinal Pacelli won on the third ballot and took the name Pius XII. As secretary of state, he had signed a concordat with Italian fascist leader Benito Mussolini that formally dissolved the Papal States but created the Vatican City-State. He later signed a concordat with Hitler that guaranteed protection for Catholic churches in exchange for the church keeping its silence in politics. The documentary said the Nazis broke the concordat’s terms even before it could be signed.

Cardinal Pacelli, according to the documentary, also counseled Pope Pius XI to not issue any statement regarding the treatment of Jews that could disrupt or scuttle the Vatican’s diplomatic relations with Germany or Italy, both of which were Axis nations with Japan.

The documentary adds that the new Pope Pius XII followed the same policy as his predecessor, speaking and writing only in broad terms and not singling out one ethnic or racial group over another. He made no reference to Jews as being among those who had suffered in his Christmas message in 1943, after the Allies had liberated Italy. He also ordered all known copies of the draft encyclical to be rounded up and destroyed.

Steven Pressman, who made “Holy Silence,” said it is possible that once the Vatican Secret Archives permits documents from Pope Pius XII’s papacy to be reviewed by researchers in early 2020, more will become know about what currently remains a mystery.

In March, when he announced the opening of these records, Pope Francis commented that Pope Pius XII’s reign was a story of “moments of grave difficulties, tormented decisions of human and Christian prudence, that to some could appear as reticence.”

But Pope Francis acknowledged the pontiff’s actions also could be regarded as keeping “during periods of the greatest darkness and cruelty, the small flame lit of humanitarian initiatives, of hidden but active diplomacy.”

“Will there be any smoking guns? Who can say?” Pressman said about these records. If there any to be found, he added, they won’t be found by him, since he doesn’t know either Italian or Latin.

The documentary alluded to a meeting Pope Pius XI was to have with some bishops on a Saturday in 1938, promising something noteworthy was going to happen. He caught a cold that Monday. According to “Holy Silence,” he told his doctors to “do anything you can to keep me alive until Saturday.” The pope died the day before the planned meeting.

“He might have excommunicated Mussolini and Hitler that day,” Eisner said, but since the meeting was never held, no one knows what the pope had planned.

Read more about the papacies of Popes Pius XI and Pius XII and the lead up to World War II at https://thecatholicnewsarchive.org. The archives have with National Catholic Welfare Council/Catholic News Services stories from 1920 to 1985 as well as material from the Catholic World in Pictures from 1922 to 1963.

NEXT: Court crusader aims to find what’s in those ‘Dark Waters’