In game gone wild, ‘Jumanji: The Next Level’ a thrill for families 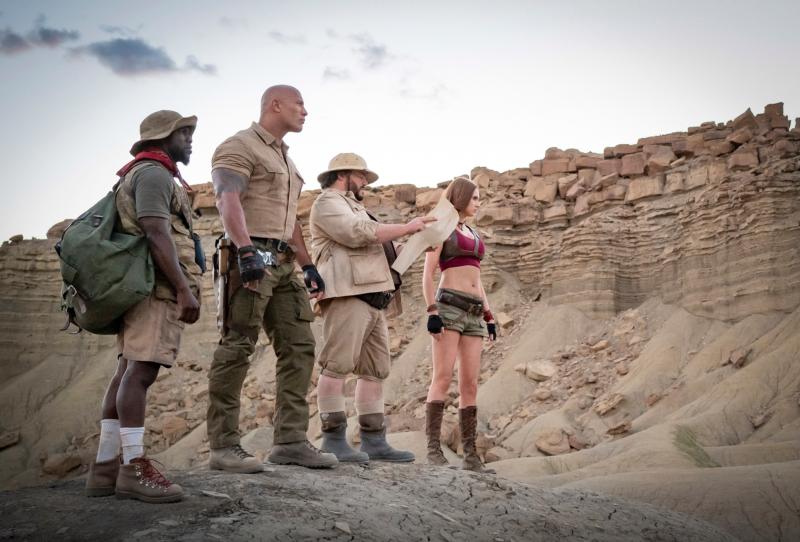 Kevin Hart, Dwayne Johnson, Jack Black and Karen Gillan star in a scene from the movie “Jumanji: The Next Level.” (CNS photo/Sony)

NEW YORK (CNS) — Playful gender-bending by video-game avatars mingles with an unexpectedly somber message about approaching death in “Jumanji: The Next Level” (Columbia).

This sequel to the 2017 original — which was subtitled “Welcome to the Jungle” and had teens physically absorbed into a vintage video game — is more complex than its predecessor, with more “rules” as well as more hazards and attending subplots. New identities, especially those that cross gender lines, are predictable comedy. But the film’s appeal is based on nostalgia, too.

If not for some language issues, this could be regarded as full-on family fare. But the filmmakers have taken the fact that the primary audience consists of adults who remember their 1990s video games as license to dip into crass terms and sexual references.

The follow-up reunites the core cast of the original. This time around, nerdy Spencer (Alex Wolff) is on a visit to his childhood home, where his grandfather, Eddie (Danny DeVito), also is staying as he recovers from surgery. Spencer’s at loose ends in his life and digs up the old video equipment to fire up the Jumanji cartridge — with predictable results.

Now, friends Martha (Morgan Turner), Fridge (Ser’Darius Blain) and Bethany (Madison Iseman) have to go after him. Somehow, Eddie and Milo (Danny Glover), Eddie’s former partner in running a diner, get pulled in as well.

Bethany and Spencer show up later, with Spencer, who had hoped he’d be Bravestone again, surprised that he’s now a new character, Ming the Fleet-footed (Awkwafina).

The ensemble’s goal, as in video games of an earlier generation, involves recovering a glowing jewel from a new villain, Jurgen the Brutal (Rory McCann). He runs a violent empire in the manner of a “Game of Thrones” character. In this universe, everyone has a designated weakness, including Jurgen, and every advancement requires solving familiar challenges in the game.

Through deserts, chased by angry ostriches, over rickety bridges, pursued by enraged monkeys, and over ice and snow to the villain’s castle, with a little avatar-swapping along the way, the characters learn introspection and teamwork. And Milo has to consider — in a surprisingly serious plot twist — his eventual real-life death.

Director Jake Kasdan, who co-wrote the screenplay with Jeff Pinkner and Scott Rosenberg, has made — in spite of the sight gags about physical abilities and regenerated characters — a reflection on adult responsibilities, mortality and self-esteem. An old game, a familiar plot and eternal verities are a potent combination.

PREVIOUS: Problematic ‘The Two Popes’ gets its history wrong