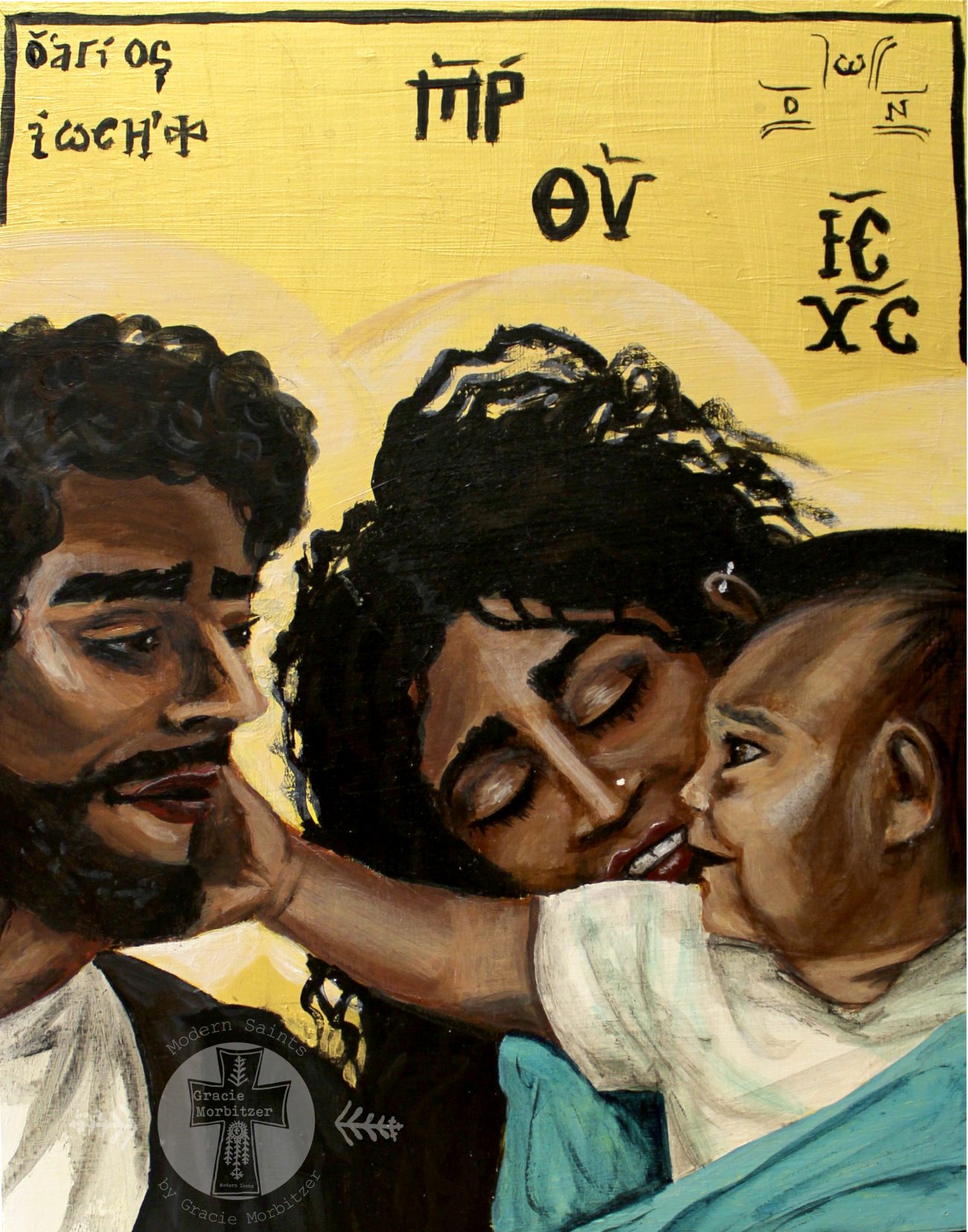 A young artist is giving a fresh face to some of the Catholic faith’s most beloved saints, using college roommates for models and painting on thrift shop wood.

“The Modern Saints” collection by Gracie Morbitzer features icons of more than 70 canonized persons, from the perennially popular St. Therese of Lisieux to lesser known figures such as St. Lidwina, patron of ice skaters.

While saints have historically been portrayed with European features, period costume and otherworldly gazes, Morbitzer reimagines them as Black, Latino, Indigenous and multiracial, as well as white.

T-shirts take the place of tunics, tresses are often tousled, and many of the images – including a blue-haired St. Joan of Arc, a leather-jacketed St. Cecilia and a Virgin of Guadalupe in Chuck Taylors – evoke a kind of hip holiness. Furrowed brows and wistful expressions render the figures as vulnerable, approachable beings.

Recasting the saints as “modern, everyday humans” is the whole point of Morbitzer’s project, which was initially sparked by a desire to decorate her art school dorm room.

“I’d just moved in, and I didn’t have any spiritual artwork,” said Morbitzer, an Ohio native who recently completed a Bachelor of Fine Arts degree at the Columbus College of Art and Design.

A lifelong Catholic, Morbitzer decided to create her own designs using “two tiny wooden plaques” she’d found in “a box of free things.”

After “scrolling online for hours” for an image to replicate, however, she found herself frustrated.

“There were all kinds of styles, and I couldn’t decide what way go to,” she said. “Then I thought, ‘Why don’t I paint Jesus in a white t-shirt?’”

An image of Mary in a leather jacket soon followed, along with icons of the archangels and of Morbitzer’s confirmation saint, Genevieve. 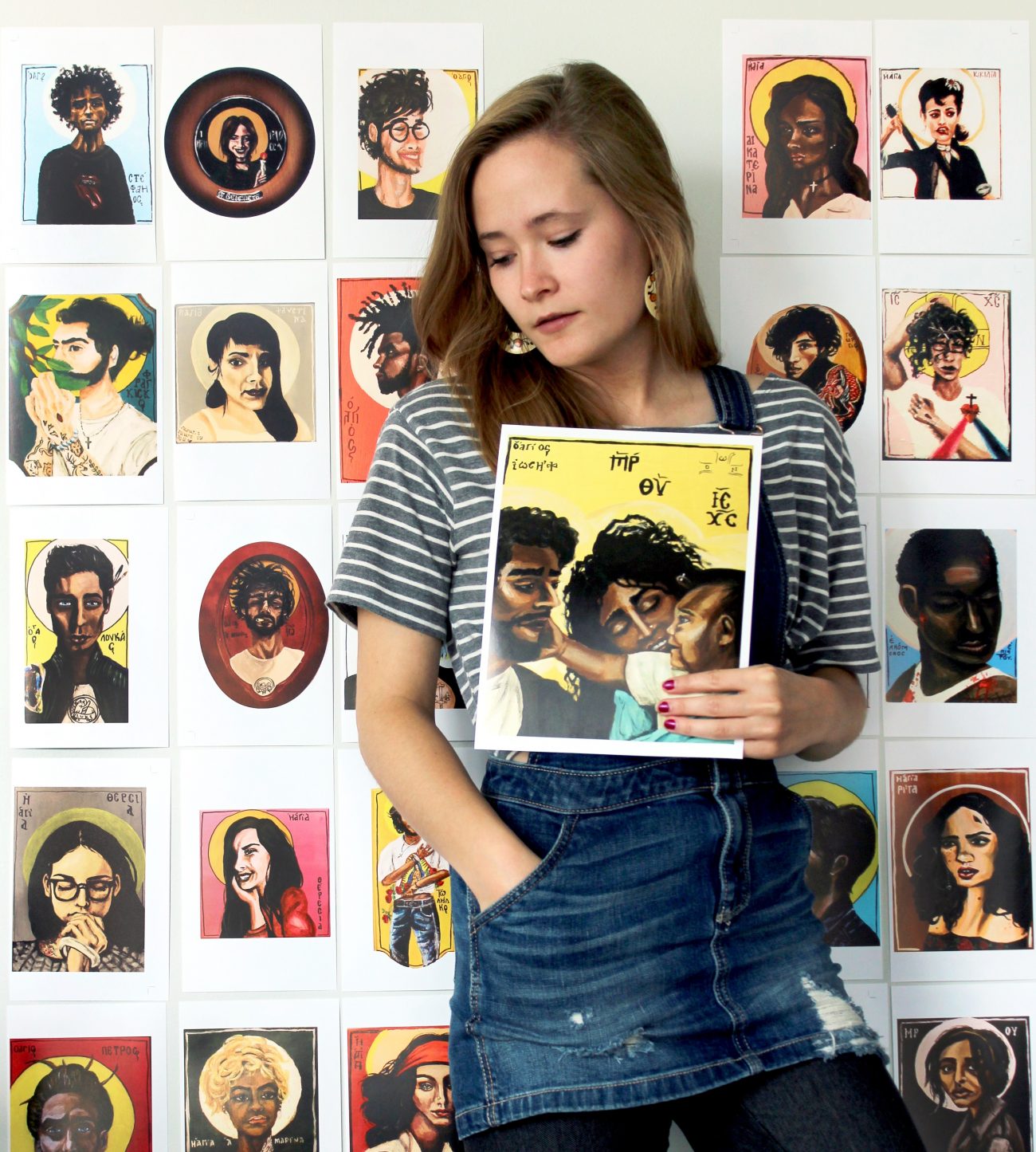 After seeing the images in her room and on social media, friends began asking for icons of their own saints, said Morbitzer, who ended up “painting all (her) roommates.”

“When they were interested, they’d ask me about the stories of these real people,” she said. “It was a way of evangelization, a way in without me trying to force faith on anyone. Really good conversations started.”

The icons also “show us that we can all be saints just like them,” said Morbitzer, while “(correcting) ethnicities to show the Church’s more widespread, though hidden, diversity.”

Aside from “a few art history courses,” Morbitzer did not study iconography specifically; instead, she relies on research, intuition and her deeply held faith to create the portraits.

Morbitzer first investigates a given saint’s life, “finding all kinds of stories” from which she “picks out the most important parts of the personality and character,” she said.

She then sketches the icon according to what she calls “a mix of references,” from people she knows to general images of various ethnicities. 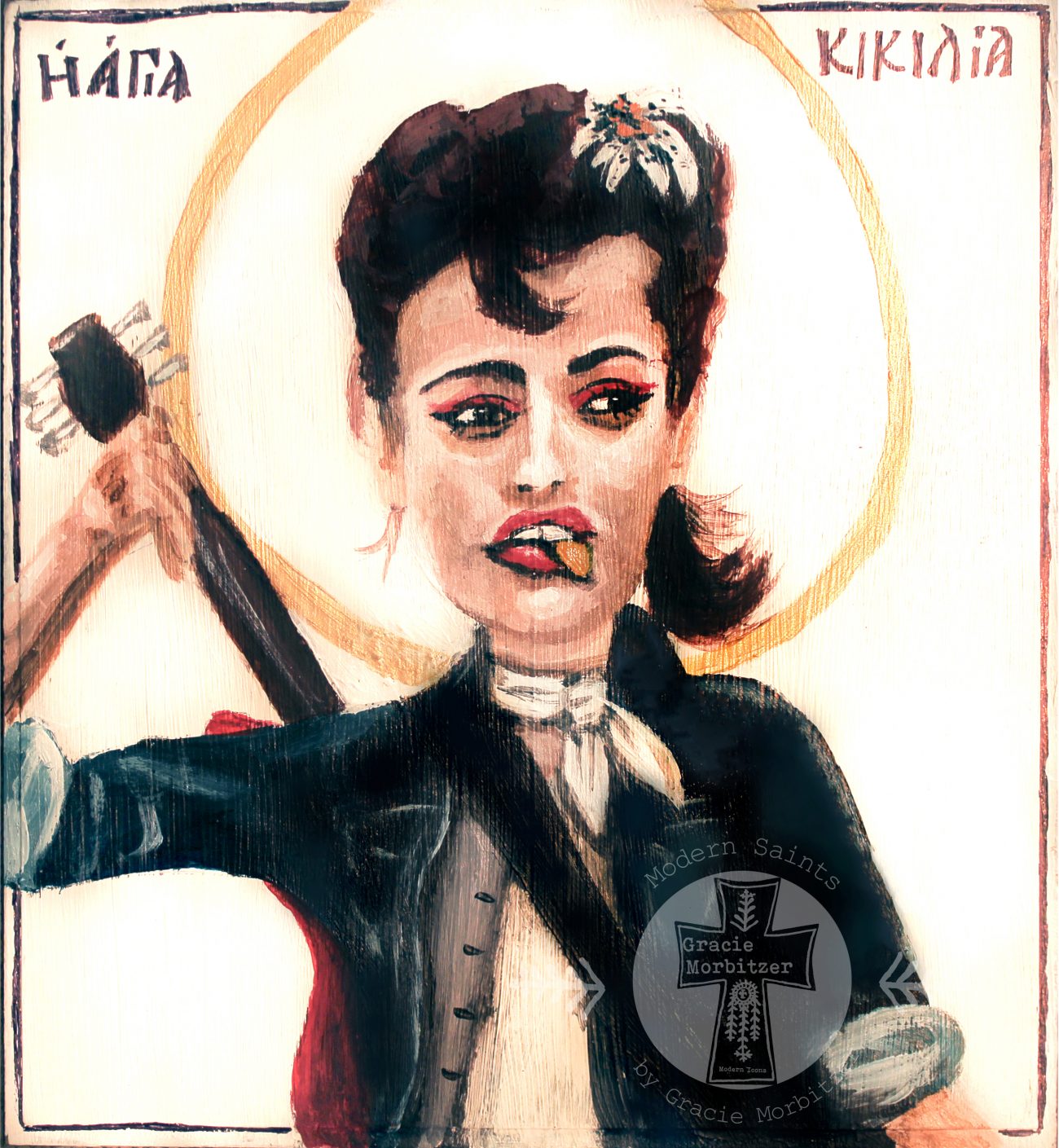 Acrylic paints are her preference, she said, although “a few commissions have required the use of gold leaf.”

Among the commissions have been icons of St. Hildegard of Bingen, St. Jane Frances de Chantal (“she’s one of my favorites; I’ve waited so long to paint her,” said Morbitzer), St. Gianna Molla and, for a bishop in England, St. Mechtilde.

Prints of most of Morbitzer’s works are available for order through her website, TheModernSaints.com, where she also provides short biographies of each figure.

Morbitzer, who is also a full-time curator, said that with the Holy Spirit’s help, she plans to continue bringing the saints to new and updated life.

A client’s heartfelt response to a recent commission of St. Clare sums up Morbitzer’s artistic mission.

The finished icon “gave her an image not of a faceless person, but someone who could be a friend and give her real advice,” said Morbitzer. “It’s important to comprehend the humanity of the saints, and how real they were. If they were here today, what would they tell us in our current anguish?”

PREVIOUS: Film tackles stigma of schizophrenia through eyes of teens

NEXT: For some viewers, ‘Fatima’ film has sparked devotion, faith