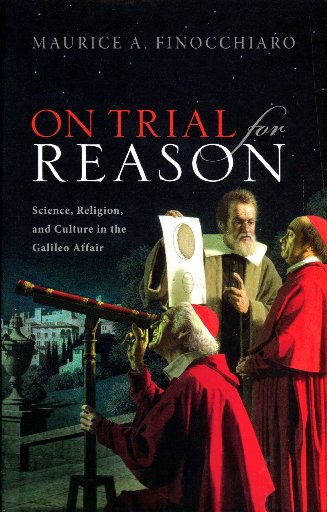 This is the book cover of “On Trial for Reason: Science, Religion and Culture in the Galileo Affair” by Maurice A. Finocchiaro. The book is reviewed by Nancy L. Roberts. (CNS)

Galileo Galilei (1564-1642) is the Italian astronomer, physicist, mathematician and engineer almost universally known as the father of modern science. He also is famous for being convicted by the Inquisition for “vehement suspicion of heresy” in 1633, owing to his assertion the Earth circles around the sun.

Thus Galileo fell on the wrong side of Catholic teaching, which then held that the planets all revolved around Earth. But evidence such as his observation that Jupiter’s moons didn’t rotate around Earth led Galileo to a very different conclusion: The Earth and other celestial bodies all orbit the sun.

This view, which supported the earlier work of Copernicus, put Galileo in direct conflict with church authorities. After his heresy trial, he was placed on house arrest for life.

The Galileo affair, as this conflict has come to be known, is usually viewed as a monumental clash between science and religion. Yet, like all dramatic historical events, over time it has been overlaid by a patina of myth that doesn’t quite tell the whole story.

How, one wonders, did Galileo become a cultural icon, a symbol for that “perennial and universal problem of the relationship between science and religion”?

Maurice Finocchiaro, professor of philosophy emeritus at the University of Nevada-Las Vegas, is singularly well-equipped to take us down a less traveled but much more nuanced pathway of understanding.

His earlier books featured both Galileo and Copernicus as subjects and here he also shows the same balance and attention to cultural nuances. He enlightens us, first, by an engaging depiction of the intellectual and philosophical setting of Galileo’s time. With lucid explanations and clear illustrations, he paints a picture of the early 16th-century worldview.

Among several different types of objections to the concept that the Earth circles the sun were those based on theology. One drew from Scripture to claim “the idea of the Earth moving is heretical or at least erroneous because it conflicts with many biblical passages which state or imply that the Earth stands still,” Finocchiaro writes. “For example, Psalm 104:5 says that the Lord ‘laid the foundations of the earth, that it should not be removed for ever’; and this seems to say rather explicitly that the Earth is motionless.”

Yet another objection was based on the idea of divine omnipotence. In this view, Finocchiaro explains, “since God is all-powerful, he could have created any one of a number of worlds, for example one in which the Earth is motionless; therefore, regardless of how much evidence there is supporting the Earth’s motion, we can never assert that this must be so, for that would be to want to limit God’s power to do otherwise.”

Other objections included those based on the empirical, such as the intriguingly named objection from the deception of the senses. It went like this: because one cannot actually perceive the Earth’s motion around the sun, then this must not exist, because the senses are generally known to be reliable.

Ultimately, as Finocchiaro shows, “the church came to recognize that Galileo was right not only about the Earth’s motion, but also about the limited authority of Scripture.” These points were made in Pope Leo XIII’s 1893 encyclical, “Providentissimus Deus,” which asserted the authority of Scripture on matters of faith and morals, but not on science.

Later, during the period 1979-1992, St. John Paul II’s “rehabilitation” of Galileo praised the scientist for demonstrating that religion and science are actually “in harmony and not incompatible.”

The author concludes that Galileo’s model of critical thinking is an exemplary legacy. He takes us there by way of an interesting, authoritative journey through the history of science and philosophy. Enriched with a detailed bibliography and index, “On Trial for Reason” is destined to become the classic treatment of this subject.

Roberts directs the journalism program at the University at Albany, SUNY, and has written/co-edited two books about Dorothy Day and the Catholic Worker.

NEXT: Book on burial vs. cremation fails to address family economics