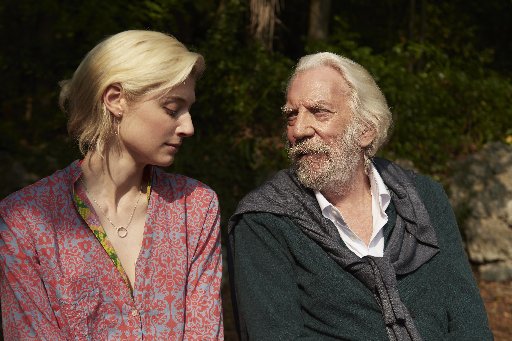 NEW YORK (CNS) — There’s Arianism, Nestorianism, semi-Pelagianism and now there’s “The Burnt Orange Heresy” (Sony). It’s title notwithstanding, however, this literate but mannered suspense drama has nothing to do with false religious teaching and everything to do with art.

Thwarted in his ambition to be an artist himself, Milan-based journalist James Figueras (Claes Bang) has instead become a critic and art historian. Though he wows clueless American tourists with his lectures, behind the scenes, James has a shady past that’s about to catch up with him.

There’s a downside to the deal, however. Using his knowledge of James’ misdeeds, Cassidy blackmails him into stealing one of Debney’s much-coveted works once he gains access to the master’s studio. Though Berenice is aware of James’ apparent good fortune, she’s in the dark about his peril.

An ironic plot twist aside, what follows is mostly sleek but talky arthouse fare. Still, “Heresy” is not without its aesthetic assets.

Sutherland is in clover as a courtly eccentric. So, too, is Jagger playing the embodiment of aggressive decadence. He menaces his interlocutors with his teeth, as though he might take a bite out of them at any moment. And cinematographer David Ungaro capitalizes on the foggy loveliness of Lake Como, its peacefulness contrasting starkly with the ferment among the characters.

On a thematic level, things are less convincing. In adapting Charles Willeford’s 1971 novel, director Giuseppe Capotondi and screenwriter Scott B. Smith play with the supposedly blurred borders between truth and illusion. But they ultimately fail to provide viewers with any definite insight.

They also restrict the appropriate audience for their movie when, early on, they linger in the bedroom James and Berenice share within hours of their first meeting.

As circumstances drive James from one transgression to the next, we’re left to wonder about his moral status. Is he merely an ethically weak man entrapped into becoming a genuinely evil one? Or have events only served to bring his innate ruthlessness to the fore?

Grown-ups undisturbed by some mayhem and seaminess may care to ponder that issue. The impressionable and those in search of casual entertainment should stick to orthodoxy.

The film contains scenes of harsh but bloodless violence, strong sexual content, including graphic nonmarital activity as well as upper female and rear male nudity, drug use, about a dozen rough terms and a few crude and crass expressions. The Catholic News Service classification is L — limited adult audience, films whose problematic content many adults would find troubling. The Motion Picture Association rating is R — restricted. Under 17 requires accompanying parent or adult guardian.

PREVIOUS: Viewers may want their deposit back after ‘The Rental’

NEXT: New treatment of Galileo case destined to be a classic