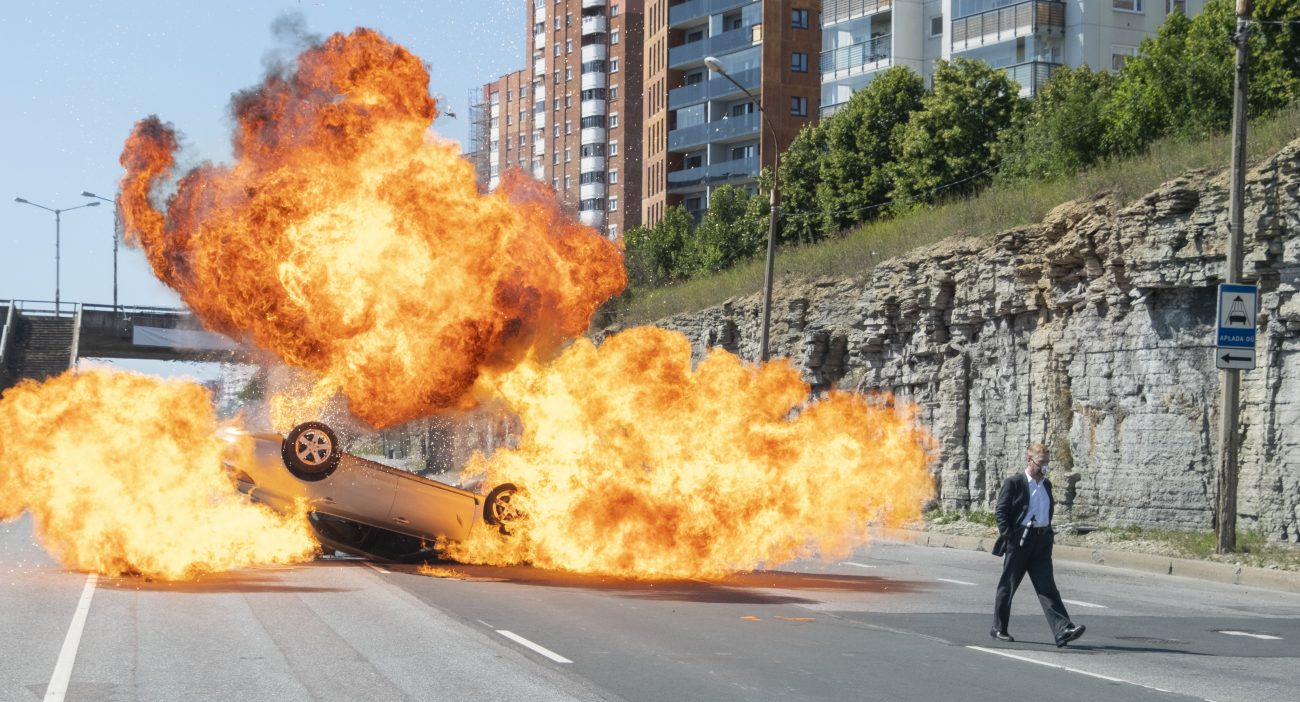 Kenneth Branagh stars in a scene from the movie "Tenet." The Catholic News Service classification is A-III -- adults. The Motion Picture Association of America rating is PG-13 -- parents strongly cautioned. Some material may be inappropriate for children under 13. (CNS photo/Melinda Sue Gordon, Warner Bros. Entertainment)

NEW YORK (CNS) — Sixty years ago, Rod Taylor hopped on a fancy sled for a loopy journey into the future in “The Time Machine.” Twenty-five years later, Michael J. Fox went in the opposite chronological direction — with a DeLorean and much more comedy — in “Back to the Future.”

Perhaps a bit too seriously. With such previous films as 2010’s “Inception” and “Interstellar” (2014), Nolan has proven himself a master of the “cerebral” thriller, a big-budget blockbuster accompanied by a heavy-handed science lesson.

In “Tenet,” which he wrote and directed, Nolan takes on temporal mechanics, suggesting the flow of time can be manipulated, even reversed. Complex scientific concepts such as “inversion” and “entropy” are sprinkled liberally throughout the dialogue.

Confused viewers will scratch their heads, as do the film’s characters. “Don’t try to understand it,” Barbara (Clemence Poesy), head physicist in a super-secret lab, tells our bewildered hero, simply called the Protagonist (John David Washington). “Just feel it.”

With that in mind, “Tenet” can be enjoyed as a globetrotting adventure overstuffed with suave players, exotic locales, spine-tingling stunts and grandly staged explosions. Think James Bond on Red Bull, only this time the villain is pursued in the past as well as in real time.

The Protagonist is a CIA operative recruited by the mysterious international espionage agency from which the movie takes its title. He is given a fast-talking partner, Neil (Robert Pattinson), and a crash course in “inversion,” showing how time travel can be used to change or reverse the flow of history.

In the wrong hands, this ability would have apocalyptic consequences. Enter Andrei Sator (Kenneth Branagh), a crazed Russian billionaire who is taking his orders from an unseen entity in the future. The plan, never fully explained, is to stockpile nuclear weapons and start World War III.

Crosby (Michael Caine), a crusty retired agent, tells the Protagonist that the only way to get to Sator is via his unhappy wife, Kat (Elizabeth Debicki). She’s eager to assist, anxious to escape her husband’s wicked clutches.

The hunt for Sator and his suppliers of plutonium takes our two operatives and Kat across several continents amid multiple car chases and some spectacular explosions. It’s a wild, often confusing ride as “Tenet” replays scenes from different time perspectives.

Nothing is quite as it seems. “You have to start looking at the world in a new way,” Priya (Dimple Kapadia), an Indian arms dealer, tells the Protagonist. And how.

Though they may be as perplexed as anyone else, “Tenet” is possibly acceptable for mature teens.

The film contains intense violence, including gunplay, and occasional profane and crude language. The Catholic News Service classification is A-III — adults. The Motion Picture Association rating is PG-13 — parents strongly cautioned. Some material may be inappropriate for children under 13.

PREVIOUS: New take on ‘Fatima’ tells a story for our times

NEXT: Nuclear anniversary serves as impetus for two excellent books