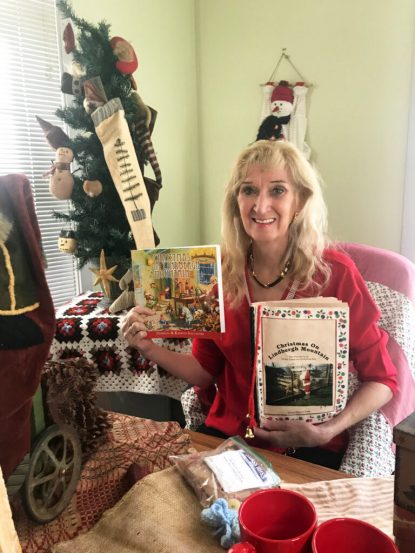 Call it a Christmas miracle.

It was 1996 when celebrated author/speaker/coach Patricia Mohan Gallagher’s 9-year-old daughter came to her and said that someone at school told her that Santa Claus wasn’t real. This brought tears to Gallagher’s eyes.

Though she knew her daughter, Kristen, had recently stopped believing that Santa was real, she couldn’t bear the thought that there were other children who did still believe in him but were being told by someone else that he wasn’t real.

What happened next during that conversation brought tears to her eyes for a second time. But for a whole different reason.

“Kristen was more worried about her little brother overhearing something like that at school than anything else,” Gallagher said.

Her youngest child, Ryan, was 6 years old and still believed. “She said to me, ‘Mom, no one should be told Santa Claus isn’t real, and I especially don’t want Ryan hearing that.’”

Motivated by her daughter’s kind heart, she decided she wouldn’t allow this to be reality for him. Or for any other child.

She decided to devise a way for the fantasy and the magic to continue, and she wanted to make it real. Gallagher and her older daughter, Katelyn, 12, brainstormed ways so that, according to Kristen, “Ryan would always keep believing.” Gallagher became inspired to create a way for the countless children who had been told Santa didn’t exist to come back to believing in him — and in the miracle of Christmas.

On the car ride home from a family excursion that year to a local Christmas village, Gallagher started making up a story about a family who loved their home on Holly Hill Road but unforeseen circumstances forced them to move to an unheated cabin on Lindbergh Mountain. Why Lindbergh Mountain?

“We passed a road by that name so I just made that location part of my fictional story,” she said. “I passed another road called Chinquapin so that became part of the story, too.”

The story continued to grow and take shape for the next few days. “Katelyn and I added details to the story. We sat at the computer in our laundry room and typed it up. She suggested that we make it like a Touch and Feel storybook, so we bought trinkets from our local variety and thrift stores. We made all kinds of little things that would go along with the story.”

That’s how “Santa Clues” was born.

“I wanted to create something magical for kids and for their parents to share together and even pass down from generation to generation” Gallagher said.

She believed her “homemade” touch and feel books could connect children with Santa while connecting them with their parents as they shared this sensory experience.

The story itself takes place at Christmas time on fictional Lindbergh Mountain. Main character Kristen lives there with her family and is worried Santa wouldn’t be able to find their old run-down cabin on Lindbergh Mountain due to a dangerous storm brewing on Christmas Eve.

Now, in keeping with the spirit of this giving season, she wants to give her beloved story to a whole new generation of families. And she believes now is the perfect time to do just that.

“With the holidays approaching and the pandemic forcing us all to have no contact with our families, I thought this was a great time for families to revisit Christmas on Lindbergh Mountain.”

On her website, Gallagher not only makes her story available to download, she also gives users a list of 100 family fun activities. Users can download the ebook and also listen to the heartwarming “Christmas on Lindbergh Mountain” story in its entirety.

That alone can be considered a Christmas miracle to parents struggling to continually come up with ideas to entertain their children during a holiday season in the middle of a pandemic. It’s all at no cost to the user at http://www.lindberghmountain.com.

“I want to keep family traditions alive — even now when we can’t be physically with our loved ones over the holidays, we can connect virtually and keep the spirit of the holidays moving forward, whether together or at a distance.”

Gallagher and her own family have been sharing the tradition of this story together since its inception in 1996. And it all started with her own children.

“My children are all grown now with families of their own, Gallagher said. “This story has been a cherished part of our holiday tradition all these years. Now I not only get to share it with my children, but with my grandchildren, as well. It’s really family bonding at its best.”

Debra Stella Ludwig is a freelance writer and author of the forthcoming book, “The Goodbye Gift,” which is about finding gratitude in grief. She resides with her husband and daughter in Pipersville, Bucks County. She can be reached at seeingthesigns@yahoo.com.

NEXT: Youth journey together (with experienced guides) through Advent series