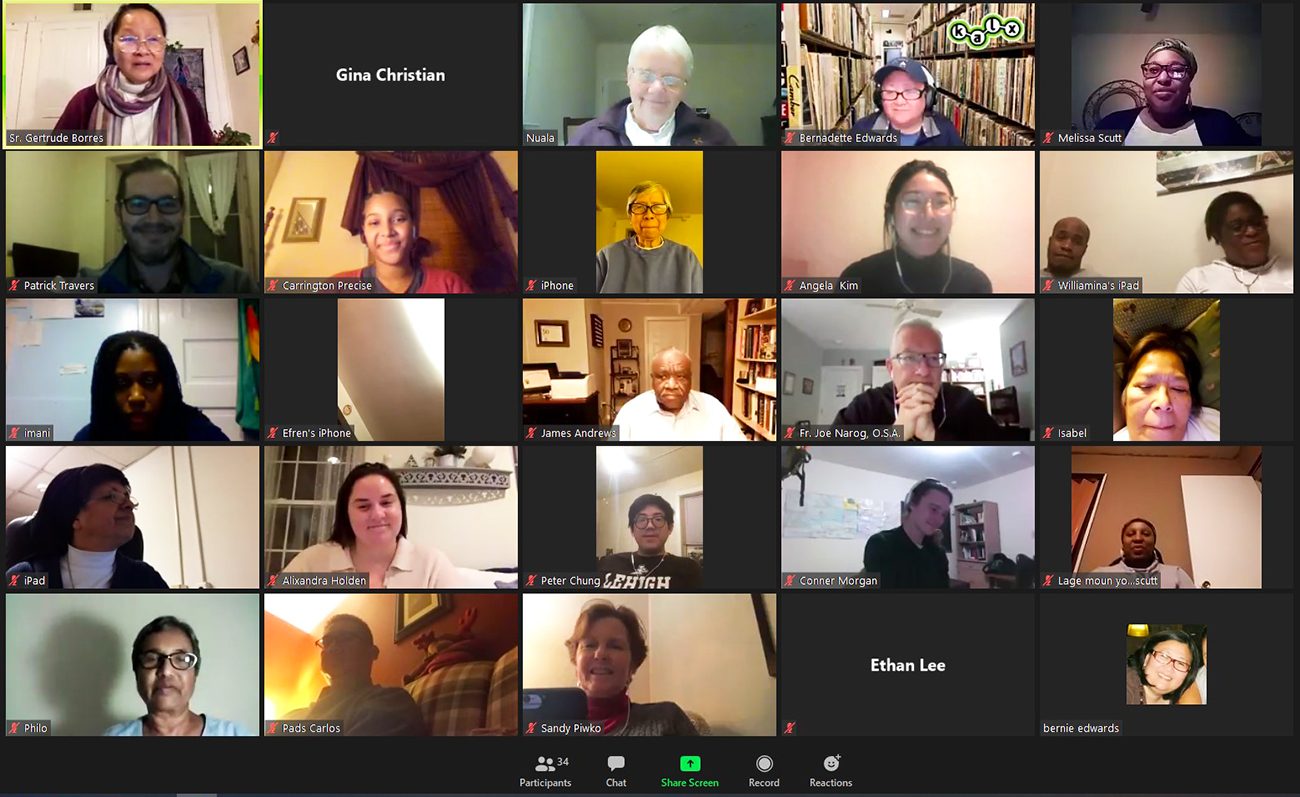 Participants in "Journeying Together," an Advent reflection series for youth and young adults, meet via Zoom Dec. 2. The four-week series is sponsored by the archdiocesan Office for Cultural Ministries and several parish partners. (Zoom/Gina Christian)

Young adults throughout the Philadelphia Archdiocese are journeying together through Advent via Zoom – and taking the prophet Isaiah and Pope Francis along with them.

Through a weekly series of video chats, participants are preparing for Christmas by exploring Scripture and “Christus Vivit,” the 2019 apostolic exhortation issued by Pope Francis to youth.

The sessions, which take place on Wednesdays from 7:30 p.m. to 8:30 p.m., are being sponsored by the archdiocesan Office of Cultural Ministries (which encompasses the Office for Black Catholics, the Office for Hispanic Catholics and the Office for the Pastoral Care for Migrants and Refugees, or PCMR), the Religious of the Assumption, St. Francis de Sales and St. Agatha-St. James Parishes in Philadelphia and the Penn Catholic Newman Community at the University of Pennsylvania.

In the Dec. 2 opening session – which drew some three dozen attendees — Sister Nuala described the prophet Isaiah as “the table setter of the Sunday liturgies for the first three weeks of Advent.”

But on the first Sunday of Advent, the prophet speaks in a “raw cry” of anguish that amid COVID and other crises remains “quite appropriate,” said Sister Nuala.

“’Oh, that you would rend the heavens and come down,’” she said, quoting Is 63:19. “You won’t find these verses on Hallmark cards, but have you ever prayed that prayer?”

She noted that “most of us at some stage” wonder why “it feels like (God is) missing in action,” a concern that often arises through a distortion of the divine.

“(We think) God’s my homey, my best friend, until chaos comes and we may realize we’re atheists and didn’t even know it,” said Sister Nuala. “What needs to go is not our faith, but our old images of God.”

In addition, perceptions of self and others also need to be renewed in order to realize God’s kingdom on earth, said Brother Patrick.

“This is a God who puts a lot of trust in us,” he said, stressing the importance of “(seeing) ourselves and (him) in a different way from … the past.”

Citing “Christus Vivit” (178), Brother Patrick reminded youth they are “the now of God,” who wants them “to bear fruit.”

As part of his presentation, Brother Patrick showed a trailer of the 2016 film “Outcasts,” in which several Franciscan Friars of the Renewal seek to encounter and build relationships with marginalized individuals — such as those in addiction and prisoners — throughout the world.

“Maybe you yourself have experienced being an outcast, someone on the edges,” said Brother Patrick.  “Clearly, it has to start with discovering God in our own lives, and being able to continue nurturing that relationship with God.”

In that strength, he said, youth can go forth as missionary disciples to “so many of our friends, colleagues and family members who need that (same) love and mercy.”

He urged participants to avoid being “closed in upon (themselves)” but instead to “open wide the doors of the church so we can go forth and meet people.”

Youth and young adults can do so compassionately, since they are uniquely attuned to the longings of the human heart, said participant Melissa Scutt.

“You realize what’s important in your life; there’s a void, something you’re yearning to get,” said Scutt, an educator at St. Raymond of Penafort School in Philadelphia. “Everyone goes through that search for answers.”

However, Scutt said, “you have to be open to listening to the question.”

“Many of us who are young adults and teenagers are looking for the right question to ask,” she said. “And we have to prepare ourselves, because we don’t know what kind of answer we’re going to get.”

The “Journeying Together” meetings will take place on Dec. 2, 7, 16 and 23. To join, access Zoom and enter meeting ID number 899 9777 6073 and password ADVENT, or visit www.facebook.com/PCMRPhilly or www.facebook.com/HispanosPhilly.