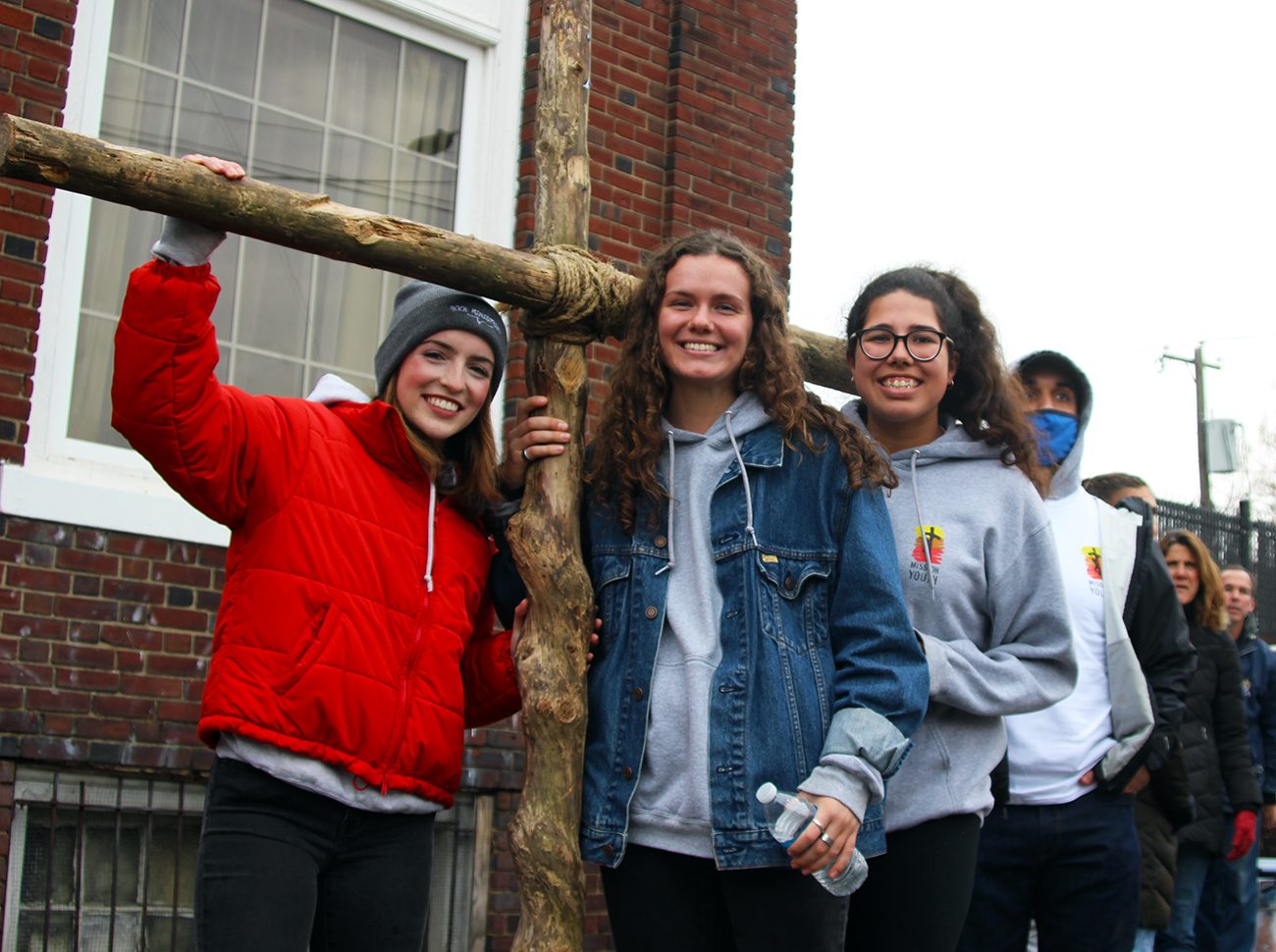 Three young women in the Philadelphia Archdiocese are dedicating a year of their lives to help those struggling with addiction, poverty and homelessness.

Since August, Dana Bizal, Callie Couture and Grace Longo have spent their days providing food, clothing and the Gospel message to those served by a number of outreaches in Philadelphia’s Kensington section.

The recent high school graduates are the first “apostles” of Mission Youth Philly, part of the Regnum Christi federation. A Vatican-approved order, Regnum Christi (Latin for “Kingdom of Christ”) consists of four vocations: the Legionaries of Christ order of priests, plus Regnum Christi’s orders of consecrated women, lay consecrated men and lay members. In total, Regnum Christi has more than 25,000 members in 38 countries.

Donations cover the $49,000 of combined living expenses for the three women in the Mission Youth Philly program, the $100,000 fundraising goal for which includes a $51,000 national expansion of the current pilot model. Applicants for the 2021-22 year are required pay a $7,500 entrance fee. The overall Mission Youth Philly program is supervised by Legionaries of Christ Father Michael Moriarty, based in Newtown Square.

In addition to its three full-time volunteers, Mission Youth Philly regularly gathers area youth and young adults for day, weekend and week-long efforts that blend Mass and Eucharistic adoration with material aid for those in need. A visible presence at pro-life events (including the upcoming Jan. 23 March for Life in Philadelphia), Mission Youth participants also undertake “cross walks” through impoverished neighborhoods, distributing food and clothing while nailing residents’ handwritten prayer intentions to large crosses carried through the streets.

Before tackling their daily challenges, Bizal, Couture and Longo, who live in community at a suburban apartment, begin their mornings with Mass at either St. Mary Magdalen Parish in Media or St. Norbert Parish in Paoli.

“Then we usually do our daily offering and head down to the city to start our mission work,” said 19-year-old Bizal, a member of St. Joseph Parish in Downingtown. 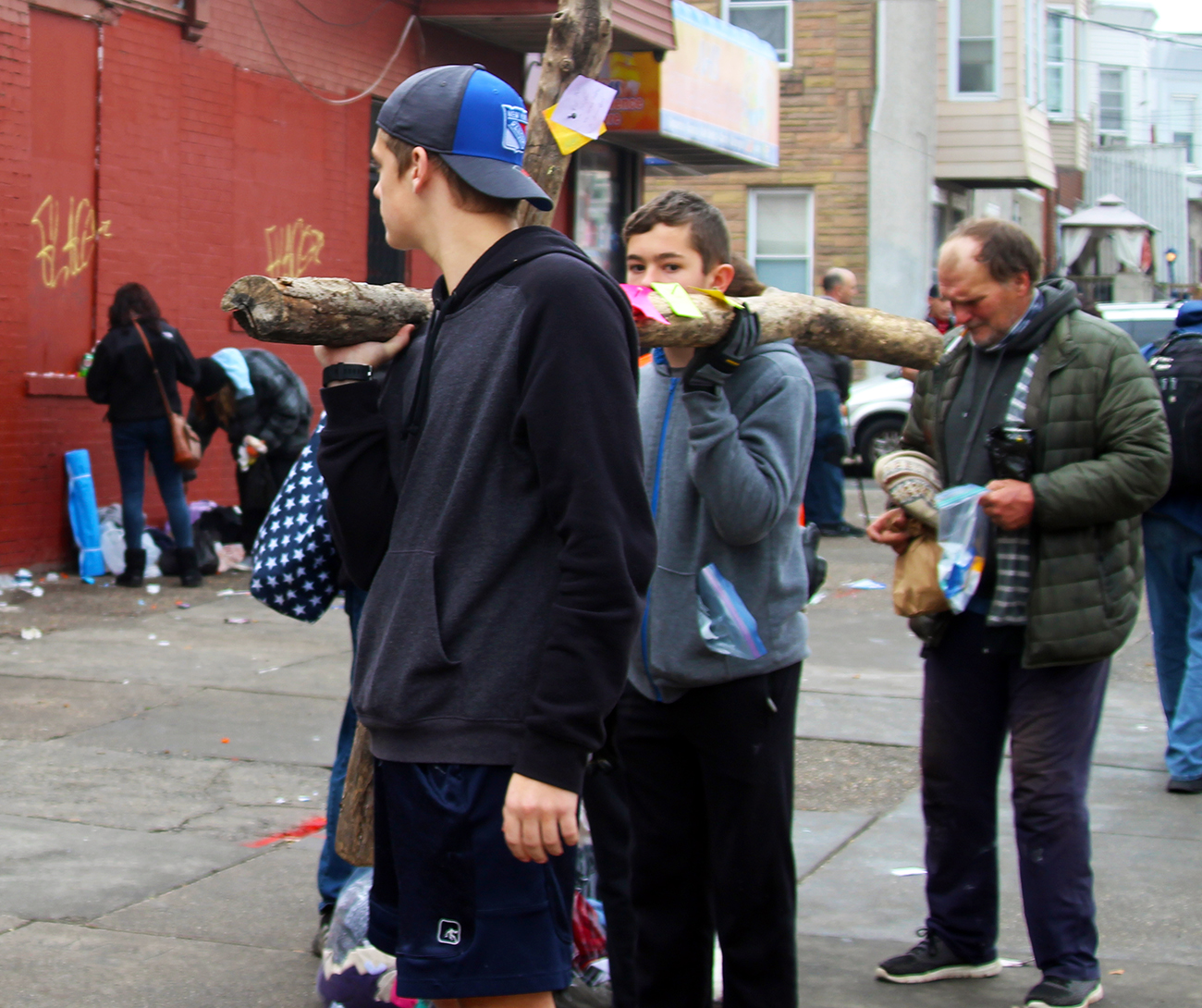 Participants in a Dec. 11 street outreach sponsored by Mission Youth Philly carried a cross with prayer requests from passersby, while distributing food and clothing to those in need. (Gina Christian)

Sites at which the women volunteer include the Community Center of Visitation, adjacent to Visitation B.V.M. Parish; Mother of Mercy House, a nonprofit Catholic mission that provides an array of spiritual and social support; Sarnelli House, a Redemptorist-founded initiative named for an 18th-century Neapolitan priest renowned for his work among the poor; St. Francis Inn, an outreach of the Franciscan Friars of the Holy Name Province; Rock Ministries of Calvary Chapel of Kensington; and the Last Stop, an addiction recovery center founded by longtime sobriety advocate Eddie Zampitella.

All of the outreaches address the key challenges confronting Kensington, a once-thriving industrial hub whose factories began shuttering in the 1960s due to economic and population shifts. In recent years, the neighborhood has become a “ground zero” of the opioid crisis, and at present has a poverty rate of close to 47%. Residents have been disproportionately impacted by COVID’s cascading effects, including unemployment, crime and increased substance abuse.

Nineteen-year-old Longo, a member of St. Francis of Assisi Parish in Springfield, admitted she was initially unprepared for the scope of human suffering she saw.

“I’ve never seen anything like it in my life,” she said. “It’s a developing world country 30 minutes from my house. A half hour difference is another dimension. It’s like you’re walking into a level of hell.”

She noted that missionaries with prior experience in developing nations have had “anxiety attacks” when joining the Mission Youth Philly team for site visits.

Yet the three women remain diligent in their daily tasks, which range from “giving out groceries, snack bags and clothing” to data entry and homework help, said Couture, who at 18 relocated from her native Virginia to participate in the mission year.

Adapting to the needs of those they encounter is essential, said Longo.

“It depends on whom we’re serving,” she said. “If we’re on the street with Mission Youth, we’ll do street evangelization. At the ministry sites, clients obviously need a lot physically, so we’ll give out food, clothes, hats, gloves.”

Both the spiritual and material support is “really appreciated,” said Steve, a young man experiencing homelessness in Kensington.

During a Dec. 11 cross walk from Mother of Mercy House to St. Francis Inn, Mission Youth Philly volunteers prayed with Steve, who said the interaction offset the sense of invisibility and isolation that characterizes life on the street.

“A lot of people down here, both residents and outsiders, look at you as less than human,” he said. “This makes you feel human, like you’re one of them, and like you’re not less than them.”

Longo’s father Rob, who accompanied his daughter on the December cross walk, said the mission outreach “brought a lot of joy to (his) heart.”

Despite the risks of serving a mission year in Kensington, he said he “has a lot of peace” in surrendering his daughter to God’s will.

Longo and her fellow missionaries — who round out their days with prayer, Scripture study and reflection — have the same confidence amid daunting odds.

“We know that two seconds after our encounter with many of these people, the needle will probably go in their arm,” she said. “But every time the name of Jesus is spoken to them, a seed is planted.”

Couture stressed that she and her team “know we’re not going to cure every addiction or help every person find a home,” but rather to “call them by their name” and “be a friend in Christ to them.”

In the end, said Bizal, “even if just one person encounters Jesus, it’s completely worth it.”

NEXT: Be cool, be you and glorify God, says local Catholic musician