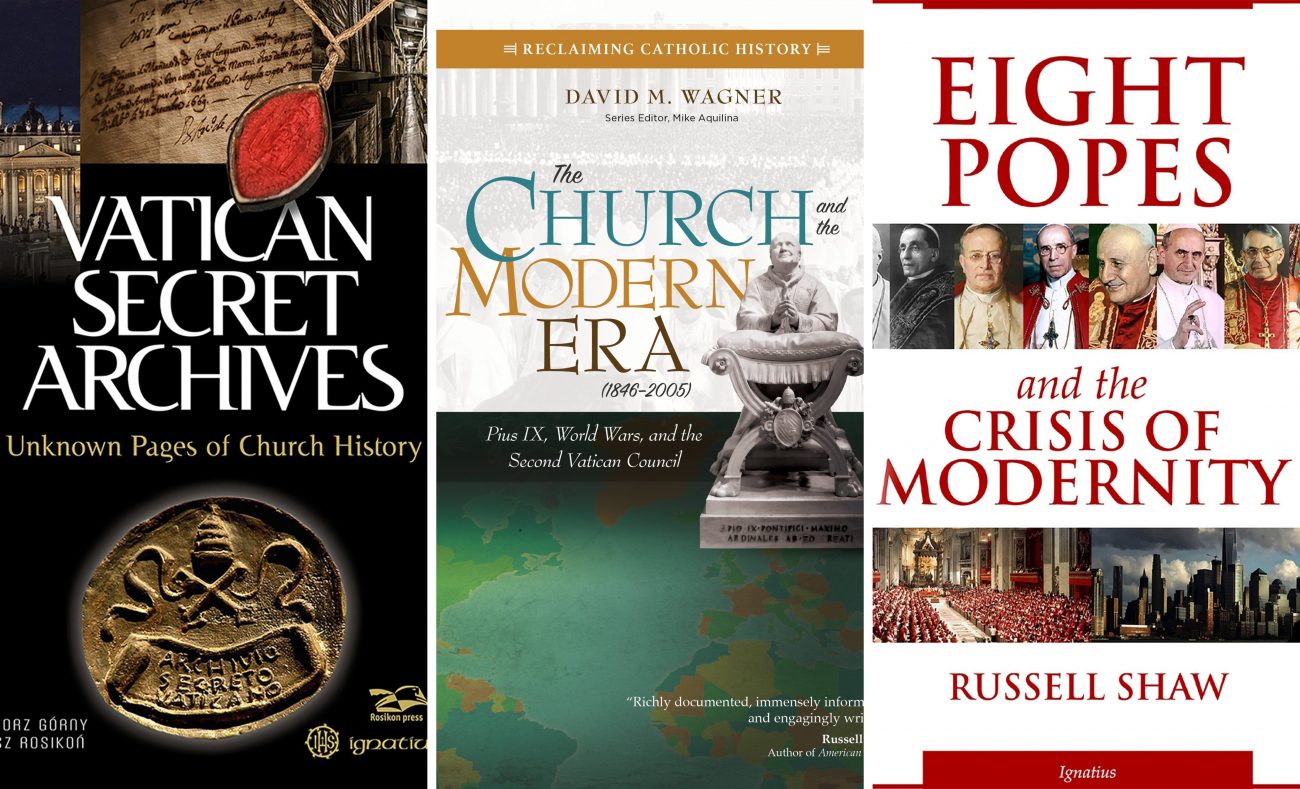 These are the covers of "Vatican Secret Archives: Unknown Pages of Church History" by Grzegorz Gorny and Janusz Rosikon; "The Church and the Modern Era (1846-2005): Pius IX, World Wars and the Second Vatican Council" by David M. Wagner; "Eight Popes and the Crisis of Modernity" by Russell Shaw. They are reviewed by Timothy Walch. (CNS composite/courtesy Ignatius Press, Ave Maria Press, Ignatius Press)

“Rome has spoken; the matter is settled.” Attributed to St. Augustine in the fifth century, this maxim underscored the authority of the pope and the Vatican for more than 1,500 years.

These three books embellish and enhance our understanding of how that power has evolved, particularly in recent times.

Foremost among the three is “The Vatican Secret Archives.” The word “secret” refers to restrictions on use, not on the content of the collections. In 2019, therefore, Pope Francis changed the formal name to the Vatican Apostolic Archives. As the authors note, the Vatican’s archival collections have been used by historians for more than a century.

“The Vatican Secret Archives” is an overview of the history of the church as shown in its documentary collections. The book is handsome, both well-written and well-illustrated. It will be an excellent addition to any church or parish library.

After an initial chapter that explains the structure and content of the Vatican’s 650 collections, the authors focus on eight distinct historical events. These include the trial of the Knights Templar, the Crusades, the paradoxes of the Inquisition, the conquest of the Americas, the trial of Galileo, the French Revolution, the Spanish Civil War and the papacy of Pope Pius XII during World War II.

The stories are compelling and intended for a general audience. Value can be found in the design of each page and the images of documents and other antiquities are exquisite. Also of note are vignettes on curiosities such as the oldest book in the collection, the use of secret codes and the discovery of missing manuscripts.

The majesty of the Vatican came at a price, however. The books by David M. Wagner and Russell Shaw articulate the struggle that popes have had with evolving modernity. Both Wagner’s “The Church in the Modern Era” and Shaw’s “Eight Popes and the Crisis of Modernity” highlight the enormous changes that have taken place in the church and society since the installation of Pope Pius IX in 1846.

There’s been a fundamental tension between church doctrine and the societal changes brought on by industrialism, world wars, sexuality, technology and so much more. Both authors take on these challenges and provide clear overviews of how individual popes have responded to world events.

Wagner’s book is the final installment in the seven-volume series “Reclaiming Catholic History.” The series strives “to communicate history in a way that’s accessible, even entertaining,” notes Mike Aquilina, the series editor. “They see history as stories well told.” And that is a goal that Wagner meets with aplomb.

He’s produced a readable, 10-chapter volume that traces the evolution of the church from 1846 to 2005. Each chapter includes a vignette of a saint of that era as well as a question for readers that focuses on the special challenge of that time.

Wagner also includes substantial notes, an index and a guide to further reading. Together these elements combine to make a thought-provoking book for the general reader.

Shaw is an author who needs little introduction to most readers of Catholic literature. In fact, he’s been writing extensively on church history and related issues for decades. It’s no surprise, therefore, that his most recent book is a lively, well-reasoned overview of 20th century popes from St. Pius X to St. John Paul II.

The book is built on a series of brief biographical essays that Shaw first published in Our Sunday Visitor. In book form, Shaw expands his treatments and includes extensive excerpts from the writing of these popes that gives readers a better understanding of the values and philosophies of each man.

Shaw also includes a separate chapter on the Second Vatican Council and its central role in the history of the church.

Together these three books remind all readers — Catholic and non-Catholic alike — of the central role of the church in the evolution of moral and social values over two millennia.

It’s an extraordinary institution that has been the guardian of knowledge, culture and the moral values that are the foundation of Western civilization. Rome speaks through these books.

Walch is an historian of American Catholicism and the author of many books including “Parish School” (2016).

PREVIOUS: Compelling ‘Judas and the Black Messiah’ calls for much discernment

NEXT: Don’t let its size intimidate you; this is a great book on prayer