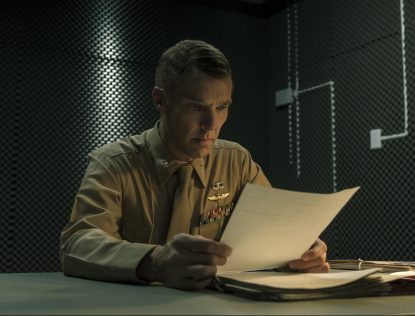 NEW YORK (CNS) — The fact-based film “The Mauritanian” (STX) doesn’t adhere to the conventions of a legal drama or a police procedural. Instead, it focuses on the moral implications of the struggle to free a falsely accused prisoner — with brilliant results.

In lieu of courtroom histrionics, director Kevin Macdonald’s adaptation of Mohamedou Ould Salahi’s 2015 memoir “Guantanamo Diary” provides an exploration of the author’s internal struggles. Screenwriters M.B. Traven, Rory Haines and Sohrab Noshirvani, moreover, are not shy about including a variety of explicitly religious elements in their script.

For Salahi (Tahar Rahim), a Muslim who was imprisoned for 15 years beginning just two months after 9/11, the initial challenge is to fortify his will to live. Thereafter, he also has to learn to forgive the months of physical and psychological torture inflicted on him by the U.S. military, an ordeal that culminated in his signing of a forced confession.

He stood accused of being a member of al-Qaida and of helping the hijackers — and even Osama Bin Laden himself — to plan their attacks.

The movie also charts the long spiritual journey of the man charged with prosecuting Salahi, Marine Lt. Col. Stuart Couch (Benedict Cumberbatch). A friend of the co-pilot of the second plane to hit the World Trade Center, Couch volunteers to handle the case against Salahi, hoping it will end with the death penalty.

But then Couch undergoes a conversion experience while attending a baptism. As shown here, during the ceremony, the congregation was admonished to “respect the dignity of every human being.”

Couch subsequently refused to proceed with the prosecution and ultimately resigned from the case after learning of the abuse to which the defendant had been subjected. In a 2009 talk at the University of Virginia, Couch — who lectures frequently on morality — referred to the line that inspired his moment of awakening as “a thunderclap upside the head.”

Salahi’s defense attorney, Nancy Hollander (Jodie Foster), experiences a voyage of spiritual discovery as well, though hers consists of doggedly fighting government efforts to suppress the evidence. The New Mexico-based lawyer, who expresses no particular faith, has a sometimes-querulous assistant in Teri Duncan (Shailene Woodley).

The sum of all this is a highly balanced and underplayed narrative that neither minimizes Salahi’s torture — in fact, it shows excerpts of all the techniques — nor undermines its own effectiveness by indulging in impassioned monologues. The intent is to build the audience’s outrage without preaching.

Sequences involving Salahi’s anguished dreams and hopeful visions of seeing his mother again slow the story. But the message they convey — that inhuman means of interrogation never work, they only degrade — is, of course, a valuable one.

For the lawyers on both sides, there are bureaucratic snags and byzantine security procedures at the prison to be endured. For Salahi, there’s the constant horror of being in a windowless cell in between sessions of torment. In the midst of this, he keeps to his discipline of daily prayers.