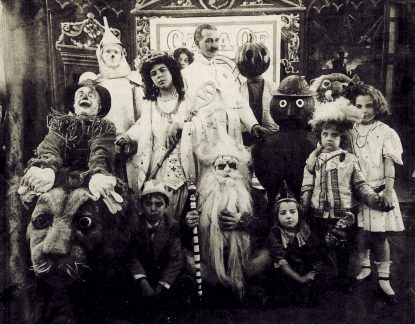 L. Frank Baum, center, the American author of the “Oz” books that inspired the 1939 film “The Wizard of Oz,” is surrounded by characters from The Fairylogue and Radio-Plays, a traveling multimedia Oz stage show, in this 1908 photo. PBS will air a show about Baum’s life called “American Experience: American Oz” April 19, 2021, 9-11 p.m. EDT. (CNS photo/courtesy PBS)

NEW YORK (CNS) — Thanks largely to repeated TV airings of “The Wizard of Oz,” each generation of Americans rediscovers the classic 1939 film and embraces it as their own.

To remedy that situation, husband-and-wife filmmakers Randall MacLowry and Tracy Heather Strain have written, directed and produced “American Oz.” Interesting but flawed, the documentary premieres Monday, April 19, 9-11 p.m. EDT on PBS as part of the series “American Experience.” Since broadcast times may vary, however, viewers should check their local listings.

Performer, playwright, traveling salesman, novelty shop owner and newspaperman are among the roles the peripatetic Baum pursued before writing “The Wonderful Wizard of Oz.”

MacLowry and Strain admire this “penchant for re-invention,” which, they observe, “reflected a uniquely American brand of confidence, imagination and innovation.” Yet they acknowledge that Baum “quit work when he found success and pursued his passions into near ruin.”

A stint as the proprietor of the Baum’s Bazaar novelty shop proved as unsuccessful as his time on the stage. So the versatile Baum turned to editing The Aberdeen Saturday Pioneer, and plunged himself into controversy.

Partly in response to a two-year drought that struck South Dakota beginning in 1889, the newly admitted state’s Lakota Sioux invoked the power of the Ghost Dance. Some believed this ritual would “wash away the white settlers” and restore the land to its original purity.

Rising tensions precipitated the infamous massacre of close to 300 Lakota at Wounded Knee on the Pine Ridge Reservation late the following year. In the wake of this horrific tragedy, Baum publicly called for the “total annihilation” of Native Americans.

Leaving Aberdeen for Chicago, Baum became the publisher of The Show Window trade magazine and finally achieved the financial stability that allowed him to write “America’s first great fairy tale,” as the documentarians aptly call it. With its publication, Baum, at 44, “achieved the renown he dreamt of all his life.”

MacLowry and Strain, moreover, can be commended for refusing to ignore the unpleasant aspects of Baum’s character, traits that don’t easily square with viewers’ preconceptions concerning the author of a beloved text. They do point out, though, that Baum’s unbearably blinkered views on race were in contrast to his advocacy of women’s suffrage.

The program’s treatment of violent strife and prejudice makes it a poor choice for kids. But teens and adults will profit from this informative, albeit poorly structured, profile.

The filmmakers needlessly interrupt the flow of their narrative by prematurely inserting commentary on the one volume — out of the more than 40 he penned — for which Baum is primarily remembered. They seem anxious to placate fans of the book who may not much care about the rest of Baum’s biography.

By allowing the focus to drift away from their subject, however, MacLowry and Strain dilute the impact of the intriguing story they set out to tell.

NEXT: What would St. Thomas Aquinas think of marijuana?